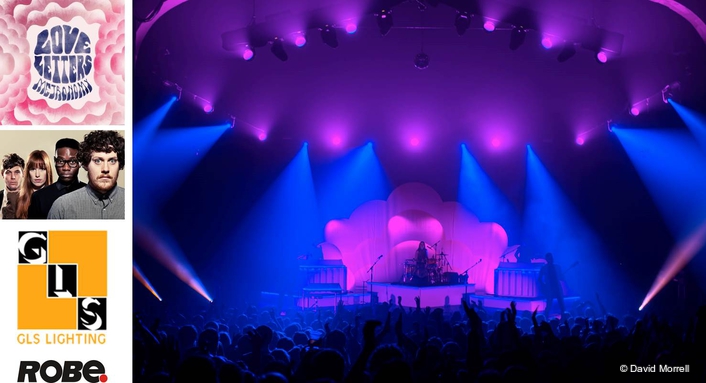 .
Ed Warren is well known for his innovative and different lighting and visual designs and is lucky enough to work with a list of equally interesting and inventive artists, one of which is UK electronic act, Metronomy.

Warren has designed their lighting since 2007. In March 2014 they launched their “Love Letters” album, the campaign for which kicked off in the UK – exclusively using Robe moving lights – and culminating in a specular show at London’s Brixton Academy.

Before the start of each tour, he combines minds with Oscar Cash regarding set design, and this time around they came up with the idea of making it resemble a low-budget 1970’s music TV show. Warren is also inspired by James Turrell’s light art, and so wanted to have a canvas that offered multiple contrasts for lighting.

He decided to make all the band risers diamond shape, downlit with LED tape, also lighting the fronts of keyboards with LED tape. The set pieces and backdrops are also lit separately – so before even a single light was added to the rig, he had 12 individual surfaces which could be lit, textured and coloured.

An adaptable floor package was supplied by Southampton based GLS, and this went in to all of the venues, comprising eight Robe ROBIN LEDBeam 100s, six ROBIN LEDWash 300s, two strobes and a mirror-ball.

For the larger venues on the itinerary this was boosted with a U shaped angled truss in the air, rigged with eight ROBIN Pointes, seven ROBIN LEDWash 600s, four strobes and three mirror-balls, together with a V-shaped truss at the front yielding six ROBIN 600E Spots and another six LEDWash 600s.

On the downstage edge of the deck four Pointes were added, and upstage behind the backdrop were an extra four LEDWash 600s and three strobes, for backlighting the double sided backdrop. 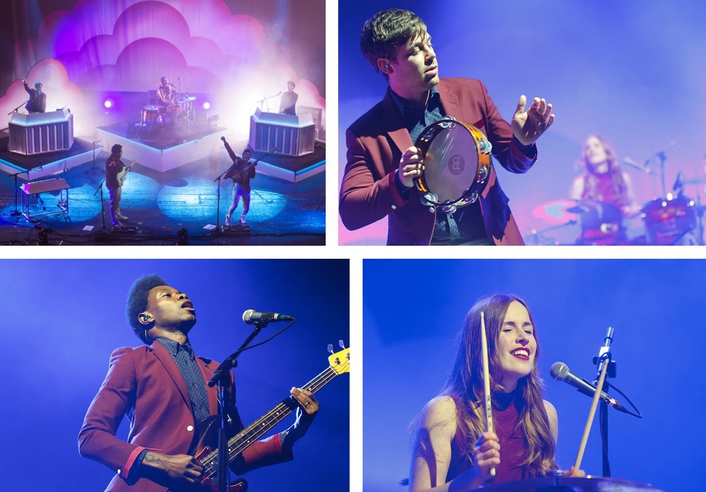 This full production rig will also be used for their French arena shows. Most of the other European gigs will utilize just the essential floor package combined with some house lights.

The LEDBeam 100s are used for key lighting.

It’s an LED orientated show, with the band lit in a variety of colours from below and from the sides as Warren particularly likes the ghost-like effect that this technique produces, as well as the colours available for this. He utilizes the tight beams as a regular moving light for a couple of songs.

The LEDWash 300s onstage are used for firing up the backdrop (made by Hangman) and washing the set pieces (made by Steel Monkey), and the stage at low level from the sides with their fabulous array of colours.

The LEDWash 600s overhead are used for more conventional stage washes and for beaming out into the audience. He uses the individual ring control effects for a couple of songs to change the look and feel of the space, and some of the upstage ones are used to back-light the multi-layer painted backdrop.

The Pointes are his primary profile luminaire. The beams are wide enough for them to act as regular spot lights with gobos, etc. however they can also become very effective washes, and then morph into being concentrated beam effects.

When they have the full rig installed, he uses the Pointes strategically for optimum impact. 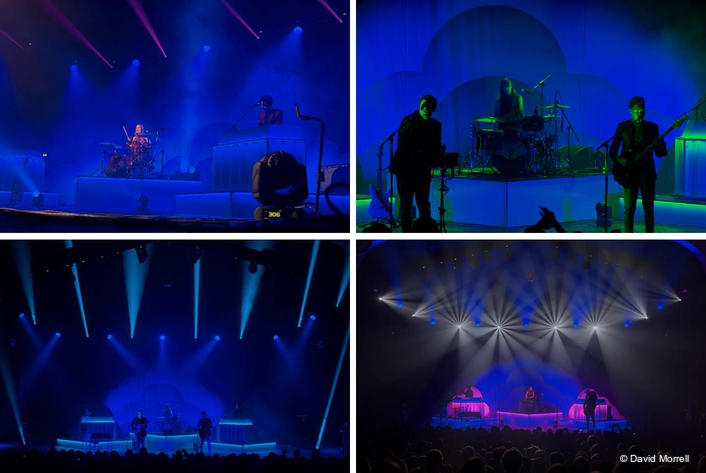 Warren has been using Robe products for some time in his work – other current clients include Mumford & Sons and Phantogram – and he is a big advocate of the brand.

Right now, he likes the LED ring control on the LEDWashes because it brings a different dimension. He loves the Pointes for their speed and because, “They are versatile, light, bright, crystal-clear and have VERY ominous beams. They also work like a dream with the mirror-balls. Like a glowing orb of wonder!”

He’s operating all the lights with his own Chamsys MQ60 console. The tour is currently in Europe, before it shifts to the US and then moves on to assorted international festivals, currently scheduled to continue through most of the year.