Robe Has One Minute To Win

.
Leading Italian TV Lighting Designer Massimo Castrichella took less than a minute to decide that he wanted Robe’s ROBIN DLS profile, LEDWash 1200 and LEDBeam 100 fixtures on his lighting rig for the latest series of ‘Un Minuto Per Vincere’ (One Minute To Win).

The second season of the Italian version of the hugely popular US ‘Minute To Win It’ games show was recorded at the Auditorium del Foro Italico in Central Rome for national channel RAI.  Contestants participate in a series of simple but frustratingly difficult to achieve 60 second challenges that usually involve common household objects!

Castrichella has worked for the prime Italian broadcaster for an impressive 35 years. He has also used Robe products in his work since 2004 and for this one – where 90 % of the lighting is for effects – he chose 20 x Robe DLS Profiles, 12 LEDWash 1200s and 30 LEDBeam 100s along with other fixtures – to light the show.

The idea was to make the set – designed by Mimma Aliffi - and lighting similar to the original format US show, but with some very distinctive touches of that famous Italian style and flair.

The DLS fixtures were rigged right above the centre of the set – where all the games are played – and used for overhead lighting and effects for which they looked excellent on camera. 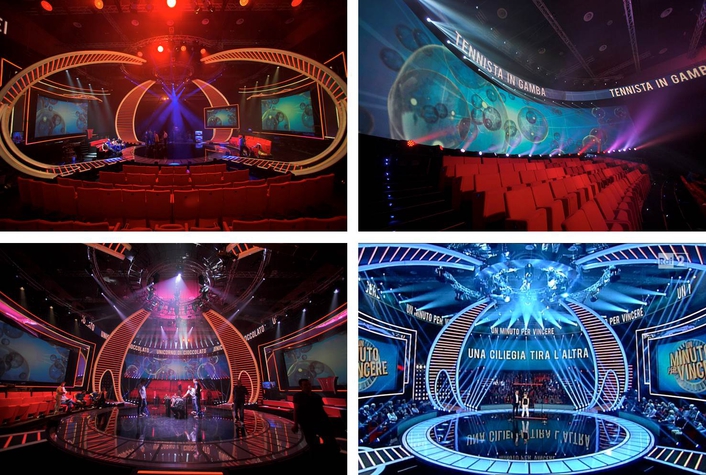 The LEDWash 1200s illuminated the audience, a task for which they are extremely efficient and the LEDBeam 100s were positioned all around the back of the audience seating shooting forward, making great fillers for the wide crowd camera shots.

It was Castrichella’s first experience working with the DLS fixtures which were chosen for their power, brightness and versatility and also to replace the ColorSpot 700E AT fixtures that he used in the same position for the first series last year.

He says, “The DLS is a great fixture and a much better all round choice – it is smaller, lighter, brighter, consumes less power and is very quiet. The quality of the colours is excellent and the framing shutters are fantastic”.

He also mentions that the colour temperature is very good and that the reliability of Robe generally is another reason he continues to use the brand consistently. The One Minute To Win recording schedule is extremely tight and no-one wants to be taking lights down and having to fix them!

The LEDBeam 100s are a favourite of his due to their tiny size, extreme speed and brightness. “You can see the beams clear and crisp even in saturated colours,” he comments.

The Robe fixtures were all supplied to RAI for the series by Rome based rental company, DIBI Technology.

Castrichella worked alongside two Lighting Operators - Quintino Caci (spot lights and profiles) and Ettore Amadoro (wash and set lights) - both using Compulite Vector consoles and he himself ran all the white lights using a Compulite Spark.