.
Durban in South Africa once again came alive with the buzz and the excitement of the 2015 Metro FM Awards, with Robe BMFL Spots taking centre stage – as part of a rig of nearly 150 Robe moving lights -  for a stunning stage presentation at the Albert Luthuli International Convention Centre.

Staged for the third consecutive year right in the heart of the city, attended by 4000 enthusiastic guests and VIPs, the massive evening organised by one of the country’s leading radio stations was broadcast live on national channel SABC1 and saw the presentation of 20 coveted awards and nine special live performance collaborations.

Co-ordinating all the technical elements was Dream Sets. Their Project manager was Robert Hoey, who was also working on the event for the third year for event producers, Blue Moon. Lighting Designer Francois van der Merwe from the Wizardry Group was again asked to add some Metro lighting magic, a task on which he lost no time in specifying the BMFLs as the core of his rig.

The 24 x BMFL Spots were supplied to Dream Sets by MJ Event Gear, the first rental company in SA to invest in these hugely powerful new multi-purpose fixtures from Robe. This was their first high profile show since MJ took delivery a few weeks beforehand.

Lighting equipment for the Metro FM Awards was a combination of kit from Johannesburg-based Dream Sets and MJ, with additional support from locally based Black Coffee.

Francois was delighted to be the first LD in the country to use the BMFL Spots on a high profile live TV show and … the first worldwide as far as we know at time of writing … to use two BMFLs as Follow Spots.

After completing the programming of over 500 show cues in three intense overnight sessions, his reaction was, “They are completely amazing fixtures! You could quite easily have an entire rig just of BMFLs … and I will definitely be using them again whenever possible!” 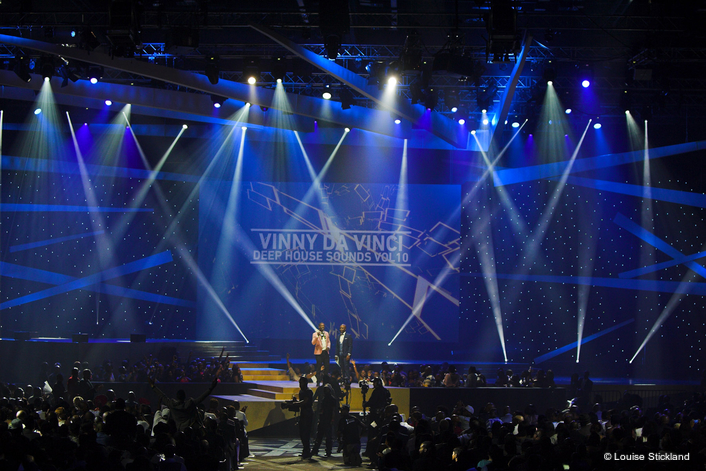 His starting point for lighting the Metro Awards show was the set designed by James McNamara which comprised 30 scenic shards rigged asymmetrically around the stage, and a multi-level stage which stepped right down to audience level at the front. Three projection screens continued the gentle asymmetry upstage, the whole concept bringing a clean and contemporary visuality to the performance space.

The BMFLs were positioned on the 11 over-stage-and-audience sections of trussing and used extensively throughout the three hour show for a mix of stage and audience washes and specials and also for texturing the floor of the set with gobo looks, which worked brilliantly for all the overhead camera shots.

“Using one type of very bright fixture I could do all the beam and spot work and all the gobo effects I needed,” explained François, admitting that the BMFLs were so bright … that to ensure the lighting was balanced for the projection, he ran them at 40 per cent for the entire show! In fact he did go to 100% once, when the lights were in a colour and full gobo look.

“They completely exceeded my expectations in every way,” he enthused.

“Seeing them in a demo room is one thing, but utilizing them in a show environment is something very different – that’s when you REALLY realise how bright they are, just how streamlined the colour mixing really is, how beautifully flat the beam is right the way through the path, the finesse of the dimming curve, the incredible depth of focus – even if you pull half focus on the gobo … the beam is still perfectly crisp!”

In short, he is completely blown away by the BMFL Spots having used them on a complex and pressurised show like this, where the challenges were to make it look great on camera as well as live, and ensure that TV director Nadia White had all the shots she needed for the top-rated telecast.

Robert Hoey also thought they were great! He’d first used four briefly as a beam effect on a show at Plettenberg Bay at the end of 2014, and this time he was able to see their full potential unleashed. “They are absolutely beyond my expectations” he declared, “They will look great on all types of shows from stadiums and arenas to smaller concerts and events”. 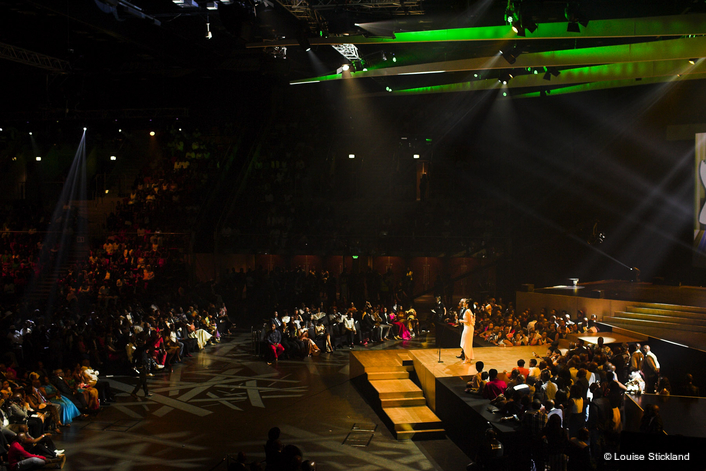 Both he and François were keen to try them in follow spot mode, so Robe’s South African distributor DWR co-ordinated delivery of the custom follow spot handles that can be fitted to the back of the BMFL Spot unit that allows it to be used as an extremely bright and very lightweight follow spot.

Two BMFL Follow Spots were mounted on underhung truss mount chairs – also supplied by MJ – on the advanced truss just above the front row of the audience.

With ‘follow spot’ mode selected, pan / tilt is disabled so the unit can be moved manually and all the fixture’s other parameters – iris, intensity, colour mixing etc. -  were controlled through François’ grandMA 2 console. All the operators had to do was point the BMFL Spot in the right directions.

They both selected ‘medium’ from the three available traction modes that alter the physical handling of the BMFL in Follow Spot mode.

This enabled François to have really neat, elegant, high-angle follow spotting with no ugly light-spill onto the stage, all helping with the slickness of the overall aesthetics. The already mentioned incredibly smooth dimming of the unit allowed him to fade-in and out on camera “Completely unnoticed”.

It was the first time he had run follow spots like this. The task is always a tricky and frequently unsatisfactory compromise between needing lumens on camera and trying to contain the unwanted ones splattering uncontrollably elsewhere - and he was very happy with the results. 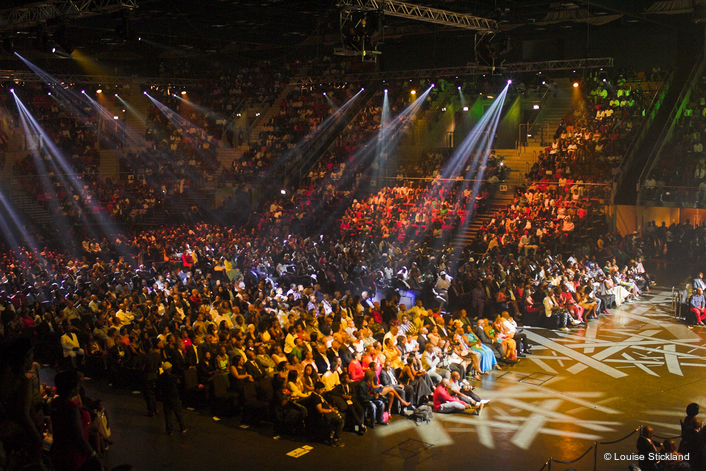 He also used 120 other Robe moving lights on the rig.

Seventy-two LEDBeam 100s were dotted around the production trusses and primarily used to light the set shards and for some beam effects. Their small size and high brightness ideal for being ensconced wherever needed, enabling François to shoot light across the space from some of the more challenging angles required to skim along the shards.

Eighteen LEDWash 800s above the stage formed the main back-light and also washed the stage areas. Sixteen ColorWash 2500E ATs were rigged on the trusses above the audience and used to highlight the crowds together with 16 x ColorSpot 700s which textured and enhanced the audience looks.

There were around 300 lights in the rig in total including a few other movers, generics and strobes.

For the general look and feel of the lighting, he took his lead from the quirkiness of the shards and the scene-setting energy that the slightly random look released into the room, however he also introduced a bit of theatrical style, with tightly lit areas of the stage and precise cuing and counter-cuing which matched the playback video content on the screens that was created by CI-Nation and The Project.

The pace of the show stayed pumped and moving from start to finish, enjoyed by an ebullient and vocal audience in the arena, millions tuning in to the live nationwide telecast and several thousand more live audience at the nearby Moses Mabhida Stadium watching a live stream on screen. 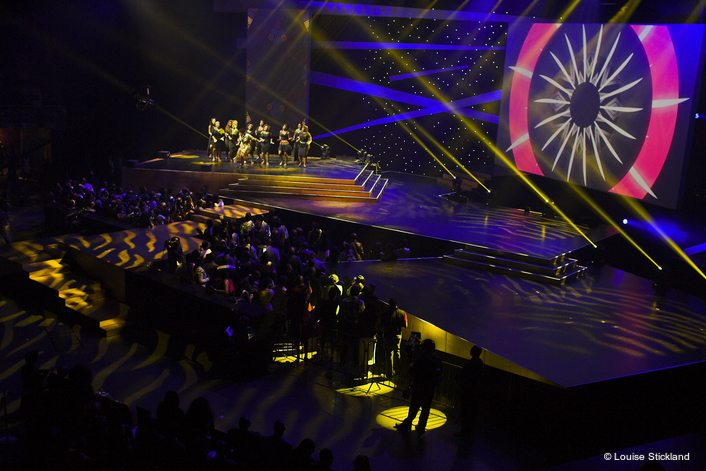 Robert Hoey sums up, “We were very proud to help deliver another great Metro FM Awards and to be part of Blue Moon’s production. The main challenge for technical was the tight timeframe, and yet again, this galvanised some great teamwork between us and our technical partners, and energised some great experience, ingenuity and talent between all the disciplines”.

Dream Sets constructed the set and provided the rigging and lighting design. They brought in AV Unlimited to provide video hardware and Sound Harmonics who supplied the excellent sounding L-ACOUSTICS Kara/Kudo PA.

As mentioned above, lighting was a combination of Dream Sets and MJ plus additionals from Black Coffee and the latter also supplied lighting - including more Robe moving lights -  for the huge VIP after party at the ICC Arena venue, one of several Metro after-parties across town on a night when Durban welcomed an additional 3000 visitors, hosted another world class event in style … and rocked the night away. 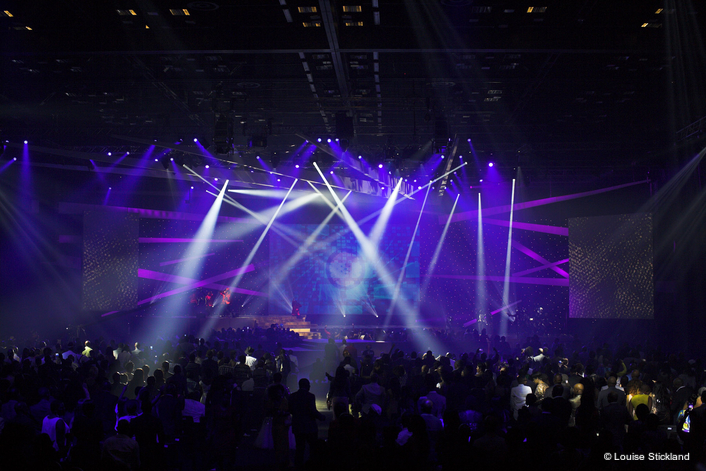