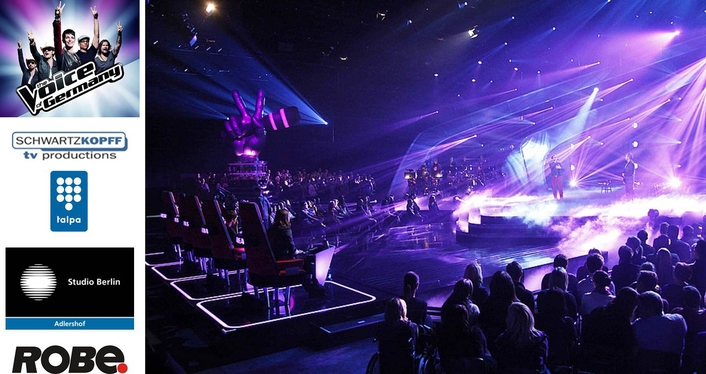 Nearly 200 Robe moving lights added glamour, sparkle and dynamics to the lighting design by Manuel da Costa for The Voice of Germany (TVOG) 2012.

It was broadcast on ProSieben and SAT.1, and featured a live audience of 1200.

Da Costa also lit the first TVOG series in 2011, for which he also used Robe fixtures at the heart of his design. He had a relatively open brief on lighting this one, and had to fulfil all the main criteria of a high profile TV show – being flexible enough to give each artist an individual look for their different performances and to ensure it worked well on camera and looked good to the studio audiences.

Also, there needed to be a visual harmony with Florian Wieder’s impressive modernist tri-angled and arched set design.

Da Costa, one of Germany’s leading TV lighting designers, opted for Robe products because he’s used  them before on several previous prestigious projects and knew they could produce the effects he wanted. Also because of their reliability and consistency. 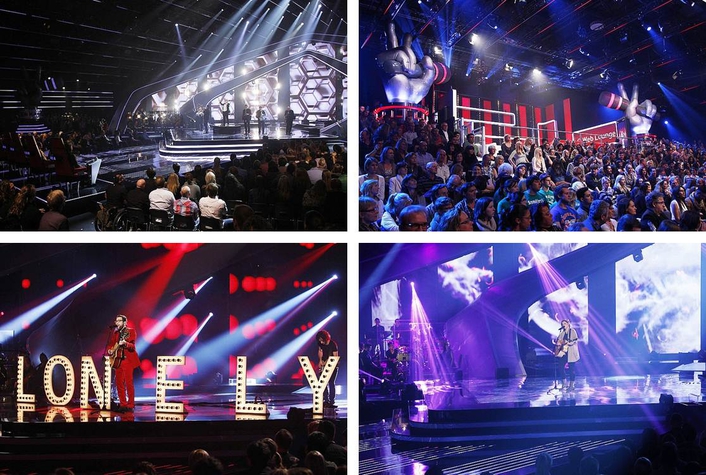 Seventy-four of the ColorSpot 2500E ATs were rigged in the trussing system above the stage and the other 24 were hung on a matrix of towers behind the stage and around the central video wall. All 88 of the ColorWash 2500 and 1200E AT fixtures were also in the roof.

The pair of ColorBeam 2500E ATs were centre stage behind the opening video screen to silhouette performers for their entrances and exits.

The ColorSpot 2500E ATs and the ColorWash 2500E ATs were used as the respective spot and wash backbones of the lighting rig, chosen for their power and intensity. “Reliability, colour and output are excellent,” says Da Costa adding that they are also very fast moving and he likes the smooth dimming.

“The Robe 2500 Series overall delivers a bright strong and punchy beam,” he states.

He appreciated the rotating gobo and prism effects – always a winner for ‘light entertainment’ TV lighting – and finds the variable frost very helpful for creating wash effects. He also utilised the iris and shutter features to create some cool stuff!

Da Costa has been using Robe lights regularly for his designs since 2007, when German distributor LMP initially invited him for a demonstration, and he has been a firm advocate ever since.

For The Voice of Germany 2012 Da Costa worked with a programming team of three, all using grandMA consoles. Michael Baganz controlled all the Robes and moving lights; white lights were operated by Uli Weiss and video was run by Bjoerge Block. Video content was produced by Falk Rosenthal from Gravity.

The Robes were supplied to the show by rental company MLS Magic Light + Sound GmbH from Koln, whose lighting production manager was Klaus Wedig.

The Voice of Germany 2012 was won by British singer / songwriter Nick Howard with his song “Unbreakable”.

The show was directed by Mark Achterberg and frequently attracted viewer ratings of several million, all of whom were treated to that bit of extra Robe visual magic courtesy of Da Costa!