Robe continues to be a popular choice for Israel’s top TV Lighting Designers, with ROBIN MMX Spot and LEDBeam 100s right up there in the eye-catching lighting scheme designed by LD Ronen Najar for the first 24-episode series of brand new singing contest, ‘Rising Star’.

The show was recorded in the Globus Group Studios in Jerusalem and broadcast on national Channel 2. Najar was asked onboard because of  his work on concert touring shows and large scale musicals. He had also worked with the production company TEDDI on lighting their previous talent contest, ‘A Star Is Born’. 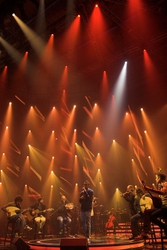 Rising Star is a singing competition with a twist,  all the contestants started their performances behind a curved projection screen that flew in around the front of the stage – with IMAG images of the artists projected onto it. As they started their song, viewers and the 800 live audience in Studio 4 – having downloaded an App for their Smartphones - registered their ‘likes’ live as the song was being performed. If the ‘likes’ reached a 70% marker, then the screen started to fly out and they made it through to the next round!

Najar’s lighting was based on an impressive curved back-wall with columns of wash lights alternating with strips of 8mm LED screen that matched the spherical stage and projection screen. It was all about the softness and elegance of the curves!

The 24 x Robe MMX Spot were part of the back wall, and used for all the rear key lighting and gobo looks as well as for sharp-focusing and applying textures to the stage surface, which was also under-lit.

The performers had to be lit so they looked equally as good onstage, on the projection screen and on the television, and whilst a completely different treatment was needed for when the screen was up or down, there had to be absolute continuity at all times on camera.

Najar has used Robe products generally for the last eight years and is a big fan of the MMX Spot which he has enthusiastically embraced in his work ever since it became available in Israel. 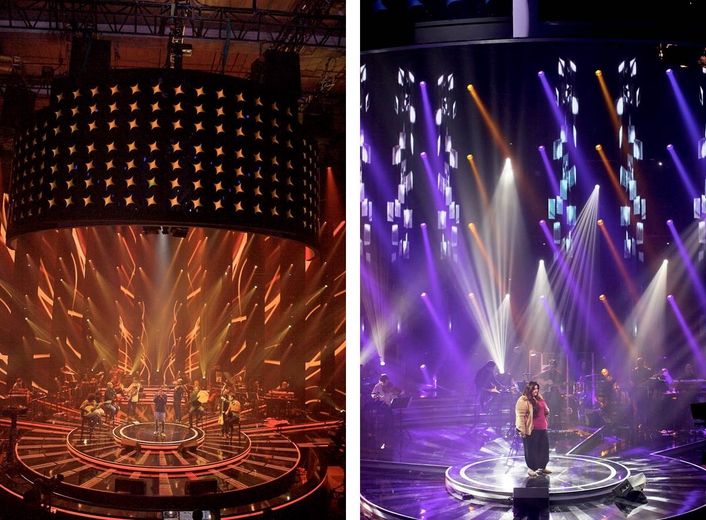 “I really like the MMX Spot,” he says. “Firstly, it’s a great unit, very reliable, very precise and it gives the exact intensity I need. Secondly it’s really small and also I like the graphics wheels a lot”.

The LEDBeam 100s were positioned at the back of the raked audience seating and used as a reverse wall-of-light effects when the screen was open, a look that enhanced the space for the wide camera shots.

Najar has been using LEDBeam 100s for the last two years for various designs and says, “It’s exceptionally bright and powerful for the tiny size. I use the whites a lot as well as the RGB colours, and again … it’s always been completely reliable”.

Another challenge on Rising Star was the timescale – each episode was created, rehearsed and recorded in a day which entailed some intense programming for which he used a grandMA2 console.

The Robes were supplied to Rising Star by Argaman Systems from Rosh Hayain, one of the leading rental companies in Israel that has invested in a lot of Robe kit.