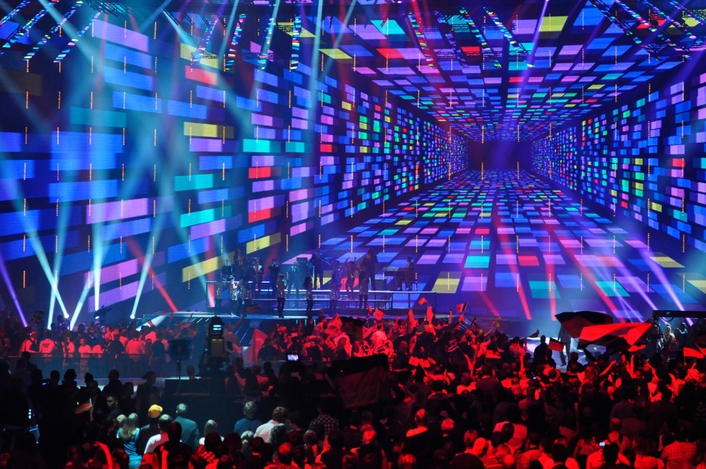 Distribution of 70 HD/SD-SDI video signals, 1,200 audio signals and 734 communications ports
The organizers of this year's Eurovision Song Contest, EBU and NDR, used a comprehensive fiber-based MediorNet system from Riedel Communications to distribute video, audio and communications signals at the event. Riedel, one of the leading manufacturers of real-time networks for HD video, audio and communications, installed a versatile system comprising of MediorNet, RockNet, Artist and Performer components, turning the former football stadium into a 15,000 square meter TV broadcast studio.

To provide the broadcast infrastructure and the signal distribution backbone the German specialist for real-time networks installed a comprehensive system that distributed 70 HD/SD-SDI video signals, 1,200 audio signals and 734 communications ports. A total of 70 MediorNet mainframes were used to integrate the various positions and departments into a single system, including the TV compound, commentator positions and the press center. MediorNet was responsible for transporting the broadcast signals to the OB trucks and distributing the video signals within the arena, for example to the monitors on various visitor floors, the video walls, as well as the greenroom and the commentator booths. “MediorNet’s network approach allowed us to keep full flexibility regarding the signal distribution and allowed us to monitor the complete installation”, said Simon Korzen, project director for the ESC at Riedel Communications.

To guarantee a trouble-free event the entire system was set up with at least one layer of redundancy. Redundancy was implemented not only in regards to cabling but also on a hardware level. Whether it was the redundant OB truck setup, redundant MediorNet hubs or the possibility to broadcast via satellite or two 125 Mbit/s MLPS data links (also provided by Riedel), the redundant setup secured the system against single points of failure. 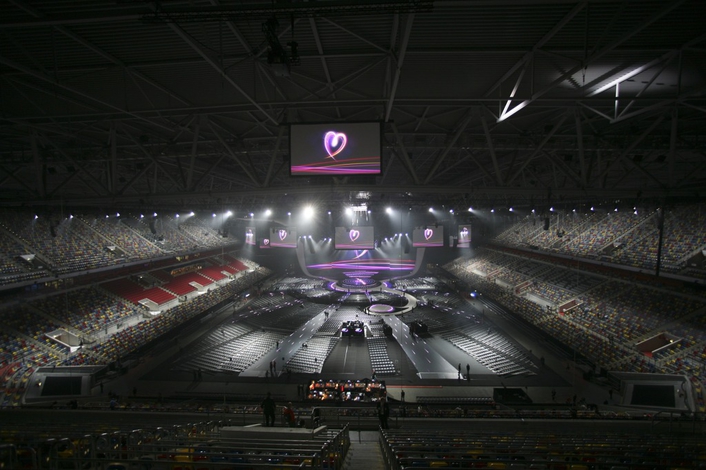 “It was one of EBU’s and NDR’s major demands to provide a flexible redundancy concept. With our MediorNet system we were not only able to provide a reliable system but we could also install everything very quickly and with a lot less effort than a solution over copper would have required,” said Korzen.

Around 1,200 audio signals were transported via MediorNet and RockNet during the event. To distribute the wireless microphone signals from the splitter world to the FOH, the monitor mix or the amp racks, an elaborated RockNet installation with connections to the MediorNet system was used.

The digital and analog outputs of the Sennheiser wireless receivers were used independently to feed an analog and a digital RockNet module. In this way hardware redundancy was achieved at the earliest stage. RockNet expansion cards for digital Yamaha mixing consoles integrated the Yamaha PM5D consoles at the FOH and the monitor consoles into the audio network. The connections to amp racks in the ceiling and to the OB trucks in the TV compound were realized via MediorNet and RockNet links. 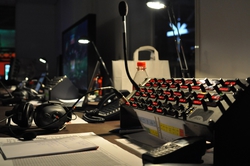 Eurovision was broadcast to more than 120 million viewers worldwide. A total of 48 commentator booths were used for broadcasting the event. Each booth was equipped with a Riedel Artist CCP-1116 commentary control panel. These panels were just recently launched in the broadcast market at this year’s NAB in April. An elaborate combination of Riedel Artist and MediorNet systems was used to set up the commentary infrastructure. The system at the commentary position was installed independently. Via MADI links it was connected to the MediorNet system of the arena, which was responsible for transporting the signals to the TV compound. Riedel Connect Duo ISDN codecs provided the ISDN connections needed for the commentator booths.

In addition to the commentator control panels, two TV screens were used in each booth. While one screen provided the program, the second monitor offered parallel information on the voting and additional camera positions simultaneously. Due to MediorNet’s integrated Quadsplit-feature this could be done within MediorNet without the need for additional hardware.

All important positions at the event, from the director to the follow spot operators, were integrated into a comprehensive communications infrastructure including Riedel Artist digital matrix intercom, Riedel Performer digital partyline as well as digital and analog radio systems. The distribution of this infrastructure was taken care of by Riedel Artist and MediorNet, translating into significant savings of time and effort during setup and installation. A Riedel Juggler interface and various Riedel RiFace modules integrated the radio infrastructure directly into the wired communications system. This allowed every unit of the 500 mobile TETRA radios to easily communicate directly with dedicated intercom ports and vice versa.

Riedel’s responsibility was more than just distributing video, audio and communications signals. The signal distribution and the IT infrastructure within the press center, located two hundred meters away from the arena, was also provided by the German network specialist. A total of 1000 workspaces with Internet access, 400 laptops, 28 Wi-Fi access points and 60 printers were installed. Furthermore, Riedel managed the entire Internet connection of up to four Gbit/s for the facility. The press center also featured an individual OB truck to broadcast press conferences. Integrated into the arena’s infrastructure over a redundant fiber link, it offered a seamless transfer of all signals between the two locations. This fiber link also enabled the distribution of all broadcast feeds to the press center for feeding the installed monitors.