Red TX Records The Audio For Jeff Wayne’s Musical Version of The War of The Worlds – The New Generation – Alive On Stage! 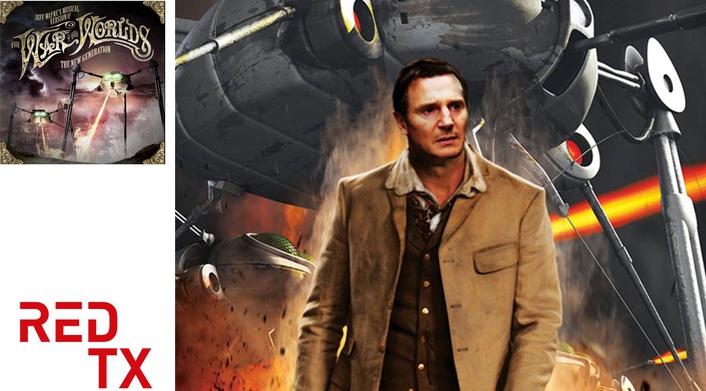 Red TX has recorded the audio for a new DVD of Jeff Wayne’s iconic musical version of The War of The Worlds
Based on the book by HG Wells, Wayne’s classic 1978 musical work has sold over 3.6 million copies in the UK alone and over 15 million worldwide, and has been performed as a musical on some of the largest stages in the world.

Red TX was commissioned to handle the audio recording during a performance at London’s O2 Arena by Universal Visual Programming.

Producer Dione Orrom says: “We chose Red TX because we have worked with them many times in the past and they have always delivered great results. Also, Red TX understood the history of this project, having recorded Jeff Wayne’s Musical version of The War of The Worlds before in 2006, so Tim Summerhayes and his team were fully aware of the complexities of the show. There were a large number of tracks involved and complex time code issues that required the skills of an experienced audio team.”

Red TX Director Tim Summerhayes, who manned the controls on the company’s main Red II truck, says: “The secret to getting this project right was close collaboration between ourselves, Visions OBs, which was handling the video recording, and the artists’ sound crew, which was headed by Front of House sound engineer Simon Honywill and systems technician James Breward (Brew). We knew we didn’t have much time to rehearse or sound check in the O2 Arena as we had to be in and out in a day and could not interface with the show until about 1.30 pm, so a lot of preparation was done in advance.”

Some weeks prior to the O2 show, Summerhayes went to see rehearsals at LH2 Studios and the show at the NIA in Birmingham and held lengthy discussions with producer Dione Orrom, director Nick Morris, Visions unit manager Dave O’Carroll and Simon Honywill to devise a secure plan for the recording.

“We agreed to interface with Simon’s PA and took his gain structure via three MADI feeds, which we combined with analogue click tracks, time codes and the audio from the 14 ambient microphones that were covering the Arena,” Summerhayes explains. “We used three different Pryamix recording systems to distribute the tracks evenly and we also had back-up systems as a failsafe. As with any project of this scale, Red TX’s Ian Dyckhoff and Ollie Nesham were key to ensuring that all the right red lights were on.

“Timecode was the main issue we had to overcome. Normally we would lock to the video truck’s timecode, but because we were using Honywill’s MADI feeds we had to lock to his sync and show code as this was also being used to trigger the lights, live screen and special effects. There was always the possibility of a timecode drift between the two systems, which could have created serious problems in post-production, but we resolved this by very careful monitoring during the day and by recording both the show and time of day timecodes so that they could easily be tracked in post-production.” 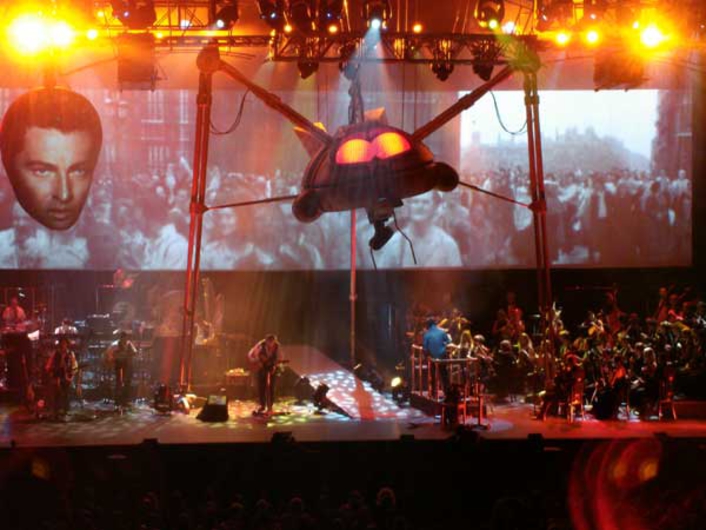 Summerhayes adds that collaboration between the audio truck, the video truck and the Front of House sound crew is becoming increasingly common on large productions because of their complexity.

“Had we just ‘turned up’ on the day, I really don’t think that the job could have been done,” he says. “We’ve been doing this long enough and fortunately we know most of the main players, so it’s now easy for us to work alongside people like Simon Honywill and to liaise with confidence with the production company. It is with shows like this that experience really counts and we were delighted that Universal Visual Programming recognised our expertise and trusted us to do the job properly.”

The new version of Jeff Wayne’s Music Version of The War of The Worlds is an extraordinary stage production that unites conventional settings with modern technology. Highlights of the multimedia show include a three-legged, ten meter high Mars robot, a 95 minute animated movie shown on a 240 square meter screen and the use of 3D holography that allows the absent Liam Neeson to interact with the live actors on stage.

The audio recorded by Red TX is now being mixed by Jeff Wayne at his OllieWood Recording Studios. The DVD of the show will be available later this year and it will also be screened at digital cinemas around the world, starting in approximately 100 cinemas in the UK from April 11, 2013.

The War of the Worlds
RED TX