Celebrating 25 years of the singer’s solo career, this unique film was recorded live in LA and mixed in the UK by Red TX
Broadcast audio specialists Red TX played a pivotal role in the production of MORRISSEY 25: LIVE FROM HOLLYWOOD HIGH, recorded at Hollywood High, a legacy concert film that celebrates 25 years of this enigmatic performer’s solo career.

Filmed live at the Hollywood High School in Los Angeles in March 2013, this intimate gig provided the material for the first authorised Morrissey film to be released in nine years. Red TX worked closely with Nineteen Fifteen and Eagle Rock Productions, the producers for Eagle Rock Entertainment, to ensure a great soundtrack. As well as liaising closely with the US recording crew, the company was also responsible for mixing the concert – a task that took place back in the UK on board Red TX’s main Outside Broadcast vehicle, Red One, with director Tim Summerhayes at the controls.

Nineteen Fifteen producer Vicki Betihavas says: “I have worked with Tim and the Red TX team for many years and they are my first choice for all my music projects, in particular live shows. On this occasion we had entirely local support for the filming, with only the producer, director and DOP coming in from the UK. However, Red TX knew the audio crew in Los Angeles so I knew we were in safe hands as Tim and the US team coordinated what we needed. Tim also mixed the Theatrical, TV and DVD versions for us and the sound was great - as always.”

Tim Summerhayes adds: “I was really happy to be involved in this project. We arranged to have the concert recorded by Guy Charbonneau and his son Ian who run Le Mobile in Los Angeles. I’ve known Guy for years and was entirely confident that he would do a great job. The multitrack arrived back in the UK as a disc drive of .WAV files. I mixed it over a period of five days and it was a very straightforward task since the recording had been so well done. The band was excellent and, because it was a small venue, the sound was really honest.” 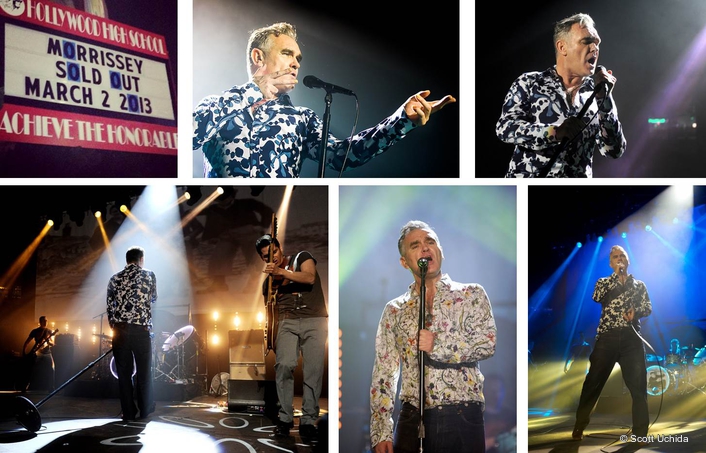 The film opens with tributes from fans who talk about their unwavering devotion to Morrissey. They also discuss the unique appeal of the unusual venue, which offered a striking contrast to the sold out arena concert at the Staples Center where Morrissey had played the previous night. Tickets for the concert in the 1,800-seater school auditorium were sold out in 12 seconds and this now legendary concert became Morrissey’s penultimate performance on his US Tour.

The project was completed in July in time for the film’s Global Theatrical release. Distributed by More 2 Screen (UK) and SpectiCast (North America) on behalf of Eagle Rock Entertainment, the film is still being shown in various territories and regions, particularly in the US where it is playing encore performances in many cities. The DVD/Blu-ray version will be released on October 21st 2013.