Production company Splinter chose Red-TX to handle the audio component of the project
Broadcast sound specialist Red TX was recently commissioned to capture the audio for a very special Red Hot Chili Peppers concert in Cologne, Germany, which was filmed and broadcast live to 1,500 cinemas around the world.

The concert marked the launch of the multi-platinum rock band’s new album, I’m With You, released through Warner Bros. Records on August 29th. The band played the album in its entirety and followed up with some of their greatest hits.

Production company Splinter chose Red-TX to handle the audio component of the project on the basis of its previous good working relationship with the sound specialists. Renowned live sound engineer and Red TX director Tim Summerhayes manned the desk on board Red TX’s new RED II truck and provided a live audio feed that achieved the same quality as the band’s in-studio performance. 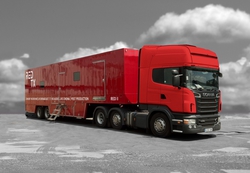 “This was a very special performance for everyone involved because it effectively launched the new album to the entire world,” Summerhayes explains. “We worked alongside Andrew Scheps who was a mix engineer on the studio album, while the Red TX team consisted of myself, Ollie Nesham and Mike Silverston. Everything was done digitally throughout with the final uplink to the world handled by Chris Bretnall from Creative Broadcast Solutions, who worked closely with the chaps from UNITED (Cinevideogroep) from Holland. So we had participation from Holland, Germany, England and America – a truly international effort!”

Splinter’s Emer Patten says the filming and live broadcast of the concert was both ‘triumphant and beautiful’.

“Everyone who took part worked incredibly hard and their dedication and willingness to engage in the spirit of the event resulted in an amazing film created under very tough conditions,” Patten says. “We have worked with Red TX many times in the past and once again they produced stunning results. It was a complex project but Tim and his team handled it brilliantly. As a result of everyone’s efforts, Splinter now has some very happy clients.”

I’m With You was recorded at East West Studios in Los Angeles and Shangri-la in Malibu, California, with producer Rick Rubin who also worked on the Red Hot Chili Peppers’ five previous albums. It was mixed by Andrew Scheps and Greg Fidelman. To date, the Red Hot Chili Peppers have sold more than 60 million albums, including five multi-platinum LPs, and have won six Grammy Awards.