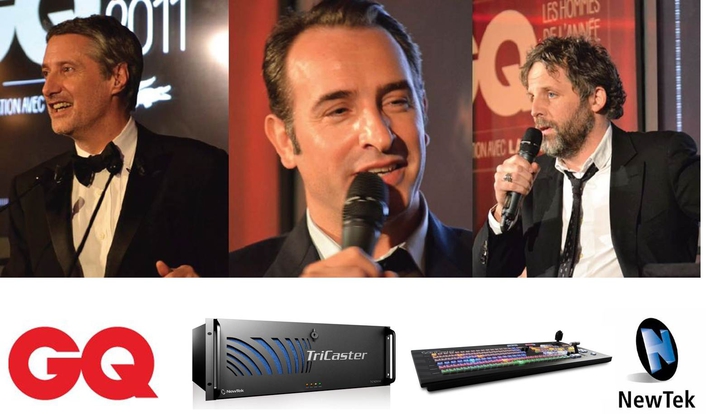 GQ rewarded the most memorable men of the year 2011, personalities, French and international, coming from different world such as sport, music, journalism, cinema…

The ceremony, hosted by Antoine De Caunes, was broadcasted live on GQ Magazine website and on the Facebook page of the magazine.

The star of the evening was Jean Dujardin, awarded “Actor of the year” by the readers of GQ, it follows the already won Golden Globe and Screen Actor Guild Awards for Best Actor.

The 45 minutes ceremony was a success and seen by more than 100 000 viewers on line. Highlights of the ceremony “Men of the year 2011” can be viewed on GQ France website and onGQ Facebook Fan Page.

EVCORP was created in 2002 by François Gazagnes. With 20 years experience on the market, the team of 45 people provides video services to producers and production companies. They use the latest state-of-the-art TriCaster 850 EXTREME, launched at NAB 2011.

Product Highlight
With TriCaster, anyone can simultaneously produce, live stream, broadcast, project and record high definition (HD) and standard definition (SD) network-style productions. A single operator or small team can switch between multiple cameras, virtual inputs and live virtual sets, while inserting clips, titles and motion graphics with multi-channel effects. TriCaster is used by webcasters, broadcasters, sportsorganizations, schools, government agencies and others to provide a new level of extended programming and content to their audiences.