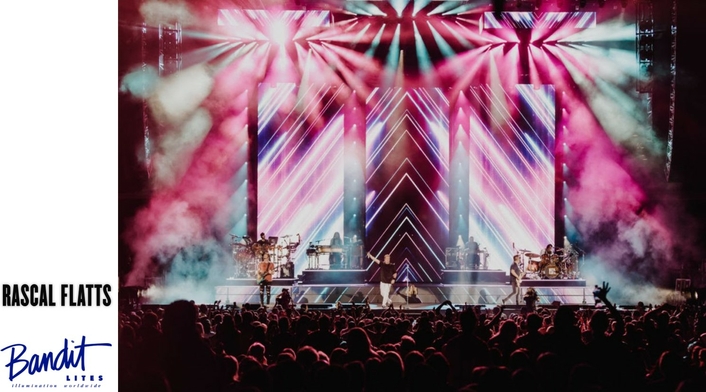 Rascal Flatts, one of the nation’s hottest-selling touring acts, is out headlining the SUMMER PLAYLIST TOUR with a lighting package provided by Bandit Lites. With more than seventeen No. 1 hits over their career, Rascal Flatts most recent single “Back to Life” is rising on country radio, following their back-to-back chart-topping singles “Yours If You Want It” and “I Like the Sound of That.”

With the iconic trio celebrating their 20th anniversary next year, lighting designer Travis Shirley looked to fashion a fresh design that both honored their two decades of touring and reinvented what audiences expect from a Rascal Flatts performance.

“These guys are legends,” said Shirley adding, “they have done it all before: arenas, stadiums, gig shows, small shows, etc. They were looking for something fresh; something that brought the Flatts performance a bit more in the ‘spotlight.’” 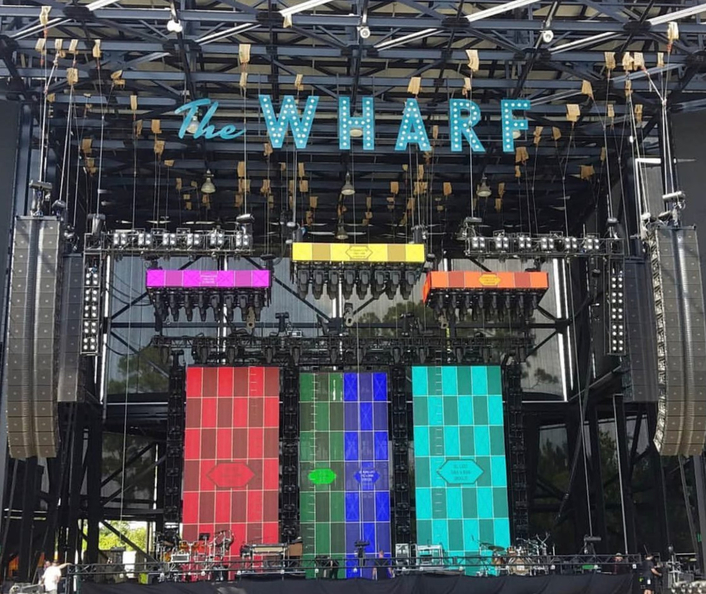 “It has been an honor to work with Rascal Flatts for almost two decades,” said Bandit Lites Vice President Mike Golden,” and while I have also known Travis Shirley for that length of time, I had never had the opportunity to work with him until now. From the moment I first saw his design and all of the detail he had put into it; I knew the rig would look excellent.”

Shirley referred to the design process for the Summer Playlist Tour as enjoyable and knew early on that his design would consist of three large pods made up of GT truss, affording the opportunity to use a multitude of different fixture types.

“I had my eye on the Elation Smarty Hybrid,” revealed Shirley. “I knew I wanted something fast, bright, and something affordable enough we could stack the pods full of them! As this is the first time my team and I have worked with the Elation Smarty, we did have to spend some time finding all the bells and whistles of the fixtures, but overall, smooth sailing.”

“Travis requested the Elation Smarty as his fixture of choice for this system and upon seeing the show, I immediately became of a fan,” added Golden. “With the veteran guidance of Production Manager Jay Schwartz and Lighting Director Andy Knighton, the process of putting this rig on the road has been a sincere pleasure. I cannot compliment the entire Rascal Flatts organization enough the way this year’s tour was put together and the show they have put on the road.”

“Being a former Bandit employee back in the early 2000's I was quite excited to be part of the Bandit ways once again,” finished Shirley. “Mike Golden and his team are wonderful to work with. Bandit is known for informative paperwork, paying attention to detail and outstanding customer service, and I couldn’t agree more. Looking forward to many more projects to come with the Bandit fam!”

Bandit’s crew on the tour is comprised of Elizabeth Weller, Brenna Rae and Cat Hoy. The Summer Playlist Tour continues through 2019.

About Bandit Lites, Inc.  Bandit Lites is a global leader in the entertainment lighting marketplace.  From touring productions to fixed installations, Bandit Lites has a full staff of highly trained professionals to deal with all types of lighting needs. Bandit’s global presence will ensure seamless transitions no matter where your next show takes you.