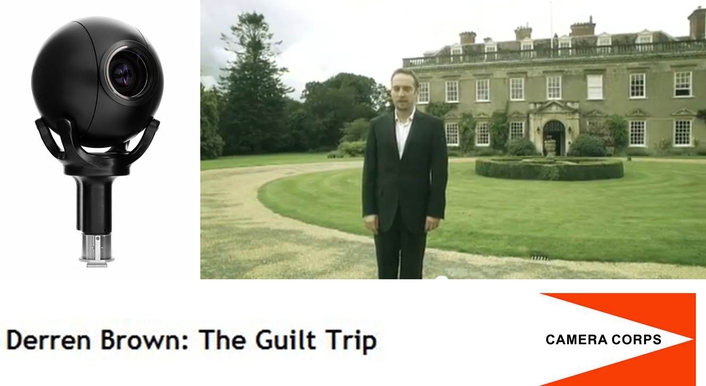 Q-Ball: The camera of choice for many reality-show, sports broadcasting and televised stage events
Twenty-two Camera Corps speciality cameras captured Derren Brown’s ‘The Guilt Trip’ at full 1080-line high resolution for transmission on UK broadcast television on Friday 4 November. This was the third episode in a four-part series of programmes from various locations showing how easily human behaviour can be manipulated. Produced for Channel 4 by Objective Productions, ‘The Guilt Trip’ was set at Bradley House in Warminster, Wiltshire.

“Bradley House is a stately home which has been in the family of the dukes of Somerset since its completion 1680,” comments Camera Corp’s Neil Ashworth. “It has only once before been used for a television production and that was shot in portable-single-camera style. The options for routing cameras and cables were restricted by the need to treat the fabric of the building with extreme care. We installed 11 Q-Ball remote pan/tilt/zoom heads and six MiniZoom cameras at various positions in and around the house plus two Toshiba IK-HD1 cameras in one of the bedrooms. Each camera was cabled to a basement room and the feeds then multiplexed along a single optical fibre to a production vehicle provided by Neon Broadcast. All 22 cameras were operated via the Camera Corps Multi Camera Control System from two joystick units located at a single desk.”

The camera of choice for many reality-show, sports broadcasting and televised stage events, Camera Corps’ Q-Ball is an ultra-compact remotely-controlled camera with integral 10x zoom optical lens and smooth-accelerating pan/tilt motors. Housed in a robust and fully-weatherproof 115 mm diameter aluminium sphere, it is fully compatible with all existing Camera Corps robotic control systems and CCU panels. Identical in size and shape, the recently introduced Q-Ball Pre-Set can be switched rapidly from one preset configuration to another quickly, precisely and quietly. Settings are stored to non-volatile memory inside the head so are retained even after a system is powered down.

Based on the site of the former Brooklands motor-racing track, Camera Corps specialises in providing high-volume support services for reality television programmes as well as very large-scale sports events. The company has achieved a pre-eminent reputation for its ability to acquire exciting and unusual television content from exceptionally challenging environments. The Camera Corps team expands during large-scale events from 16 staff based near London’s Heathrow airport to as many as 200 specialists, including professional climbers who are very experienced at rigging camera systems at height in almost any location.