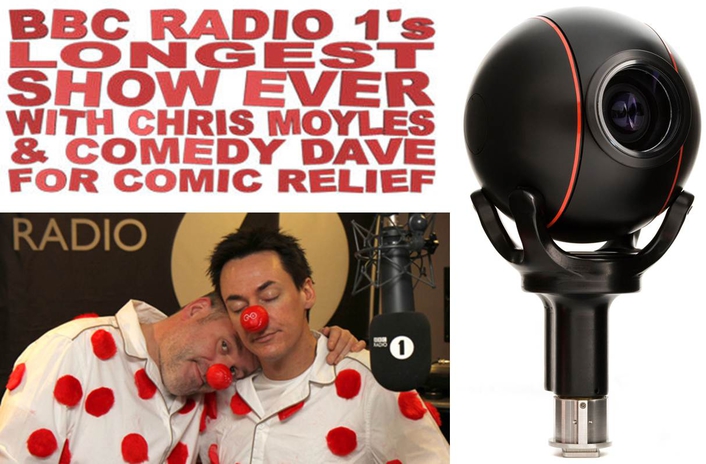 The marathon programme was televised from Broadcasting House, London, using a total of six Q-Ball cameras
Six Camera Corps Q-Ball robotic heads were used to provide live coverage of a record-breaking BBC Radio 1 broadcast by Chris Moyles and Dave Vitty. Televised via the red button on digital BBC 1 and on the Radio 1 website, the presentation commenced at 5 am on Wednesday 16th March, surpassing Simon Mayo's 37-hour record for longest Radio 1 show on Thursday evening and continuing to a total 51 hours 30 minutes by 8.30 am on Friday 18th March.

The transmission raised 2.4 million pounds in pledges from listeners and viewers for the Comic Relief charity. Radio 1 colleague Fearne Cotton's promise to broadcast in a swimsuit if the 2 million pounds target was reached encouraged a late acceleration in donations.

The marathon programme was televised from Broadcasting House, London, using a total of six Q-Ball cameras. Each Q-Ball was controlled remotely, enabling a wide variety of viewing angles to be captured without need for cameramen to intrude into the radio studio.

"We are very gratified that Q-Ball cameras were able to play a part in bringing this marathon radio performance to the attention of Comic Relief donors," comments Camera Corps Sales & Project Coordinator Tim Reynolds. "Red Nose Day 2011 broke its own record by raising over 74 million pounds, the highest total in its 23 year history. It is proof of the continuing power of broadcasting to unite audiences in support of a common goal."

Q-Ball has sold successfully across four continents since its introduction in 2009, including 120 systems during 2010. Recent new orders include 33 Q-Ball systems in the USA, 36 in Australia and 20 in South Africa. Sales have also been strong in Europe where Q-Ball systems have been purchased by some of the largest outside broadcast facilities and equipment hire companies.

Comic Relief was founded in 1985 by Richard Curtis and Lenny Henry in response to famine in Ethiopia. Highlight of Comic Relief's appeal is Red Nose Day, a biennial telethon held in March, alternating with sister project Sport Relief. Comic Relief is one of the two high profile telethon events held in Britain, the other being Children in Need held annually in November. Currently, its main supporters are the BBC, BT and Sainsbury's supermarket chain. The BBC is responsible for the live television extravaganza on Red Nose Day; BT provides the telephony, and Sainsbury's sells merchandise on behalf of the charity. Since the charity was started in the 1980s, Comic Relief has raised over 650 million pounds.

Camera Corps specialises in providing high-volume support services for reality television programmes as well as very large-scale sports events. The company has achieved a pre-eminent reputation for its ability to acquire exciting and unusual television content from exceptionally challenging environments. The Camera Corps team expands during large-scale events from 14 staff based at Shepperton Studios to as many as 200 specialists, including professional climbers who are very experienced