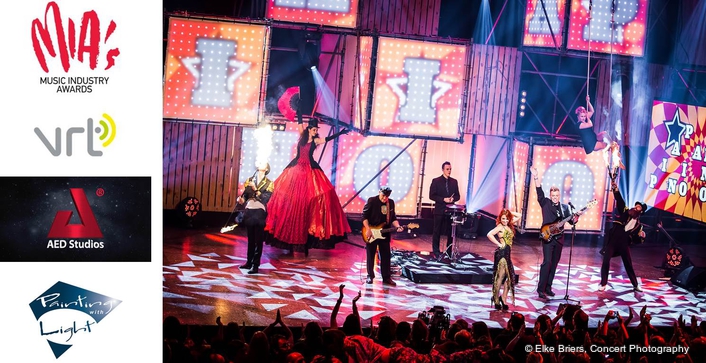 .
Luc Peumans of Painting With Light lit the high profile Belgian TV Music Industry Awards (MIA)s event for the first time last year … and producers VRT (Vlaamse Radio en Televisieomroeporganisatie) Belgium were so impressed with his work, that this year Luc was invited back to create a full production design - incorporating lighting, set and video / visuals.

The event – honouring the very best of Flemish musical talent and success from 2014 - is the most watched music TV show in the country (broadcast on Channel Eén – One) and a massive talking point on the country’s music industry calendar. It unites all the glitz and glamour straight off the red carpet - with Awards nominees and celebrities taking their seats in the ‘Green Room’ right in the middle of the space – with a full audience of very enthusiastic music fans who fill the rest of the studio.

This year the producers wanted a fresher and more youthful look and feel to this fast-paced live TV event, something similar to a festival vibe, and that was a major element of Luc’s brief for creating an exciting new visuality. For the first time the MIA’s were staged at the AED Studios in Lint. 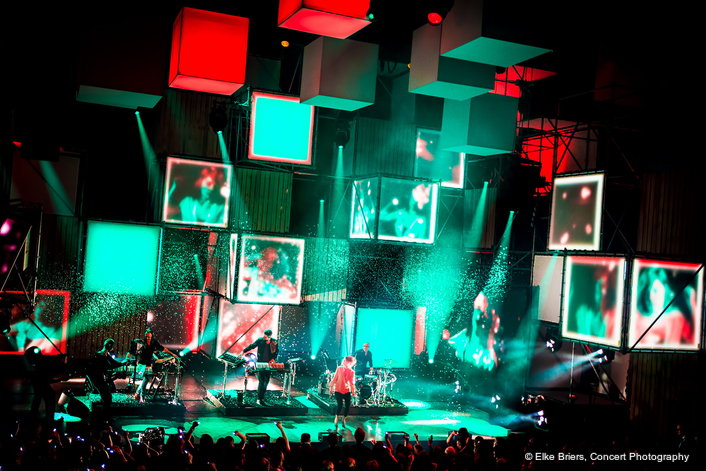 Eight acts performed live and 16 Awards – both Public and Music Industry judged – were being presented by Peter Van de Veire, so Luc decided to bring a festival / pop-up feel to the environment. Four stages needed to be covered – Main Stage, B Stage, Awards Stage and a Mobile Stage on wheels that moved to different positions in the audience – ensuring all could get close-up and personal with the action.

Behind the Main Stage, to set the tone and emphasise the temporary / improvisational nature of the show, the base set was created from lots of scaffolding made into smaller ‘boxes’ by being covered by pieces of wood or white fabric stretched across the fronts. StageCo supplied three trucks of steel for this and the result was a basic ‘constructional’ feel that’s common to many music festivals and outdoor events. 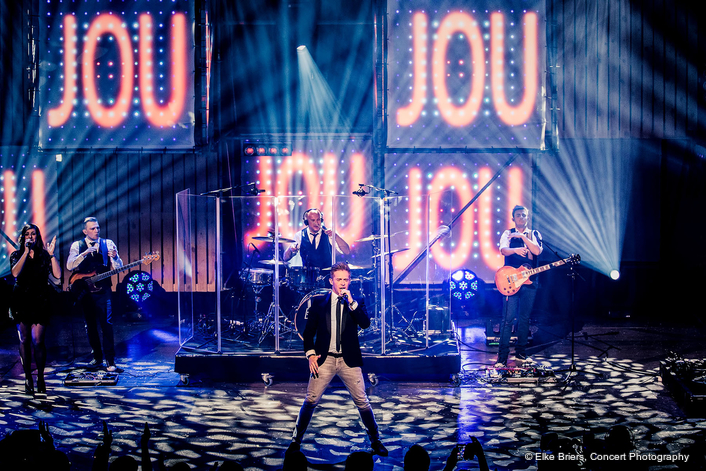 For the set design, Luc worked together with Deusjevoo, a set design and building specialist based at the same C-MINE technology park in Genk as Painting With Light. “It made complete logistical sense to pool resources and work on this element of the event together” explains Luc, “It proves that collaboration works!”

These were masked with projection screen material on the front to disguise the LED sources which changed the nature and texture of the surface, so when running higher resolution video material, it resembled sharp and crisp projection, and when using the low res pixels the twinkly effects were ethereal and completely different.

To the left and right of the main stage were 4.5 x 2.5 metre screens made from high resolution Pixled F6 LED, which moved in and out on a Kinesys automation system. Both sides of the stage, these screens were used to access or close off the changeover zones as the rolling risers were prepared with kit for the next act to appear on the main stage. 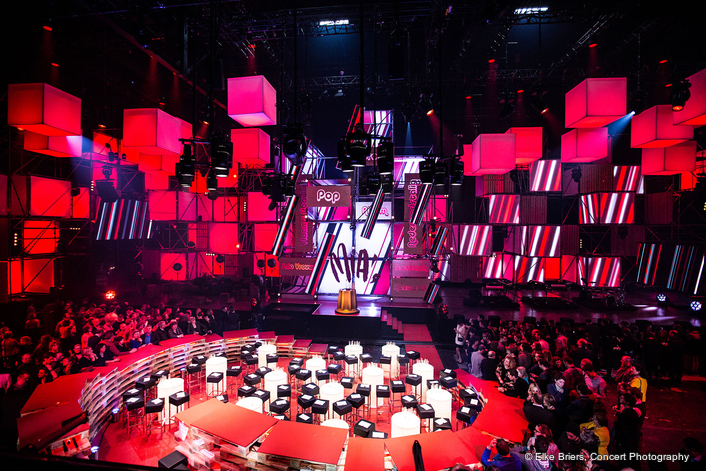 Behind the Awards Stage was a series of vertical stripes of Pixled F6 LED – 45 modules in total – which displayed all the awards info, related graphics and stings.

Six pieces of show (playback) video content for the live acts were specially created by the PWL team – of which New Solid were commissioned to produce those for Netsky and Triggerfinger -  and together with some artist supplied materiel, this was all programmed onto two PWL supplied Coolux media servers programmed and run by PWL’s Katleen Selleslagh.

Lighting and rigging equipment was supplied by PRG/EML whose event production manager was Chris Pellens, and their first task was to install a massive trussing grid in the studio which gave all the required lighting positions.

Luc’s design featured 54 x Vari*Lite 5s above the Green Room area for washing the room and the clusters of trees which were part of the set. On the stage left and right sides of the audience, these fixtures were used for side lighting and for creating background for the camera shots. 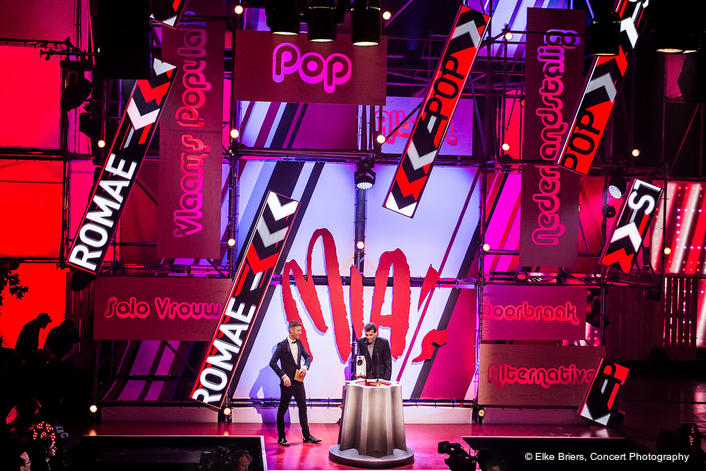 AED Rental made 24 x High End Shape Shifters available – a mix of C1 (RGB) and W1 (whites) - which Luc dotted around onstage and at the back of the Green Room area, and used for making great eye and camera-candy.

The fronts of main stage scaffolding ‘cubes’ were specifically lit with 20 x Robe LEDWash 600s in the ceiling, both the fabric and wood fronted pieces and the video cubes (when ‘off’) took the light very well, their different textures bringing a real 3D feel to the space.

Ninety Robe LEDWash 300s were dotted around the scaffolding structure and used for lighting the pipes and fabric / wood pieces, augmented with about 96 LED PARs, and a further 24 x PRG LED uplighters were available for the wooden panels and 24 linear LED battens accentuated the lines of the scaffolding structure. Sixteen1-cell binders were used for highlighting and fast chases. 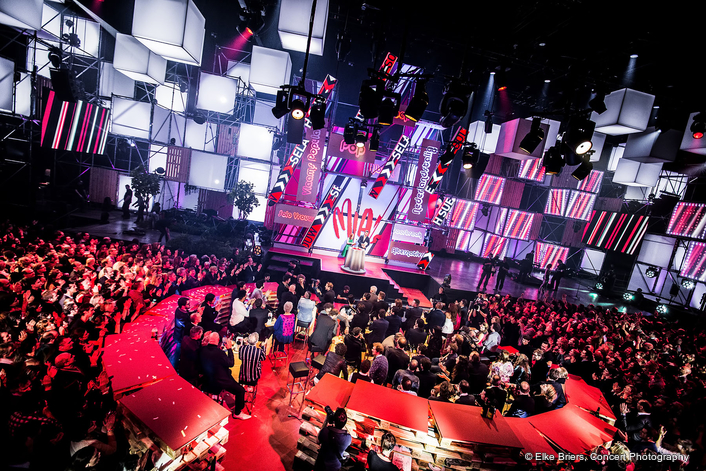 The lighting was all programmed by Luc and PWL’s Paco Mispelters and Paco ran the grandMA2 full size console for the show with a Light as backup.

As is often the case, time was the biggest challenge for Luc and his creative team, who were confirmed only 6 weeks before the show. Happening in the first week of the New Year also meant that the festive holiday had to be factored into the logistics, which increased the available time vs. pressure considerably.

There was also limited technical time, so Luc really had to think on his feet “True festival style!” 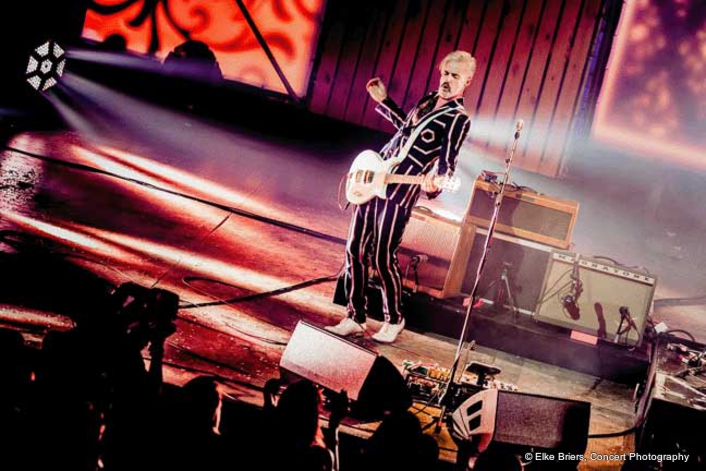 On the other hand, being responsible for the entire visual package and production design enabled Luc to produce a coherent and integrated look and means that communication between the different visual aspects was … extremely quick and decisive.

Once again the French-speaking musician and singer STROMAE was a big winner, taking the Award in four of of the five categories in which he was nominated and breaking the previous record to become the most ever MIA Awarded artist!

A massive after party was enjoyed by all the winners, artists and VIPs while Luc and his team could take the credit for this being hailed as one of the “best ever” looking MIAs.