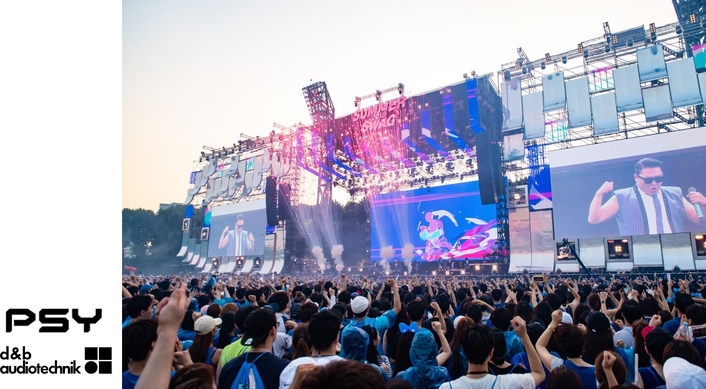 South Korean superstar Psy, internationally famous for his 2012 mega-hit ‘Gangnam Style’, embarked on a multi-stadium tour of his home country over the summer. Amid record high temperatures, supersized venues and a pumping EDM playlist, the team needed a hardy and technologically advanced solution. They turned to the d&b GSL System, along with ArrayProcessing, to cope with climate changes, climactic K-pop dynamics and challenging acoustics.

Psy’s 2018 dates were the fourth incarnation of his ‘Soaking Wet Show’ series of concerts, so called due to the amount of water sprayed onto the audience to entertain and beat the sweltering summer heat. 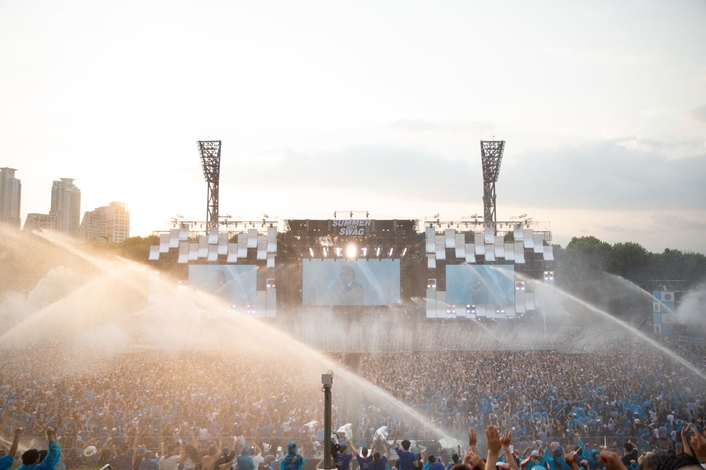 [GSL solution]
The Seoul-based PA rental company Artmix supplied the GSL loudspeakers. The team rigged fourteen cabinets of d&b GSL8 and two cabinets of GSL12 per side for main L/R system, eight SL-GSUB per side for flown subs, fourteen d&b J8 and two J12 were rigged for outfills.

To meet the LF demand of PSY’s EDM style, Artmix deployed sixteen J-SUB for ground stacks. The deployment of front fill consisted of twelve V8. A D80 amplifier powered the set up. 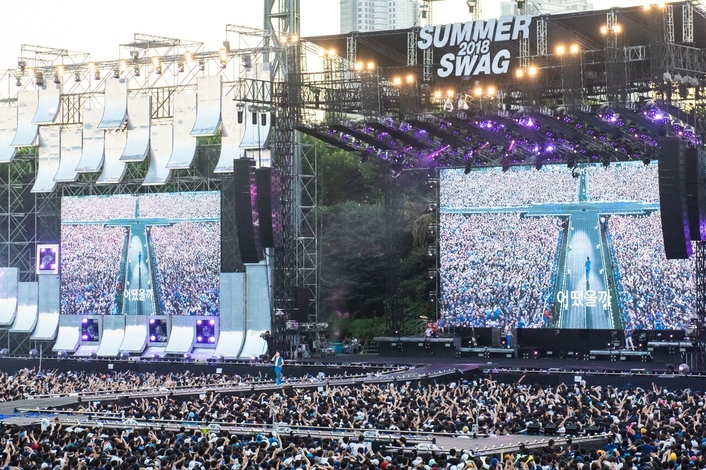 “Designing the sound system presented some challenges, since each of the stadiums has its unique characteristics, in terms of size, seating layout and distance from FOH to the main stage,” said Artmix’s Audio Director, Sun-Joong Kim. “We decided that our main objective was to tune the system to be as similar as possible, to create an identical sonic response in each venue.”

[Hot and humid]
Summer in South Korea can be hot and humid. During this tour, temperatures in the region reached some of the highest levels since records began. “At the Busan tour date, it was 40 degrees with 40% humidity at the sound check, 36 degrees with 65% humidity at the rehearsal, and 30 degrees with 70% humidity during the show,” Kim continues. “Needless to say, we had to ensure this didn’t have a negative impact on the sound. Thankfully, one can factor temperature and humidity into d&b Array Processing, so we ran the shows with multiple versions of ArrayProcessing slots, which was so helpful in making everything sound identical both day and night.”

The Artmix team utilised the d&b amp remote control software, R1, to monitor not only levels but also the system’s temperature throughout rehearsals and shows. 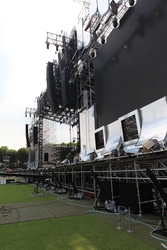 [Tonal balance]
Sun-Joong Kim also served as FOH sound engineer for the tour.
“It’s clear that the GSL System is optimised for large tours like this one,” he says. “Generally, there is an excess amount of low frequency on the main stage when you rig large quantities, but not with GSL. This phenomenon enables us to focus monitors more cleanly. The GSL setup minimized the impact on the stage and helped us to focus more on the house sound, which was a triumph. Utilising flown subs, for instance, we ensured the audience heard more LF throughout the seating region. We achieved the same tone across the huge stadiums.”

When it came to sound, Psy himself had some specific requirements. “He asked me to ensure that the stage, IEM and FOH sound was identical,” says Artmix’s Seung-ho Shin, monitor engineer for the tour. “Psy is not just a singer but also a producer who makes decisions on all aspects of his shows.

“There are lots of times when Psy leaves the main stage and performs on the runway, performing while hearing FOH audio instead of IEM because dance cues with other dancers are mismatched. When he is by himself on the runway, he uses IEM. Therefore, our goal was making the tonal balance and sonic characteristics for both regions as similar as possible without compromising sound pressure and distortion. Having all d&b products for all our wedges as side fill and the main was highly beneficial to achieve this goal.”

More than twenty-five thousand fans joined Psy for his show in the South Korean capital of Seoul, united in the dance steps made famous in his ‘Gangnam Style’ video. The tour has maintained Psy’s status as one of K-pop’s biggest global stars.