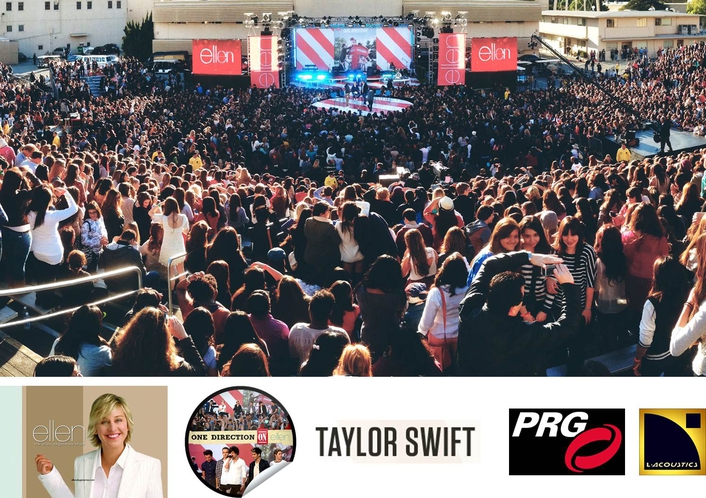 Taylor Swift, One Direction and other artists benefit from KUDO system
Production Resource Group’s Los Angeles team recently deployed an L-ACOUSTICS sound system for several concerts recorded for broadcast on NBC’s popular television talk show, Ellen. Two of the show’s most recent musical guests included One Direction and Taylor Swift, both of whom performed on outdoor back lots at Warner Bros. Studios in Burbank. 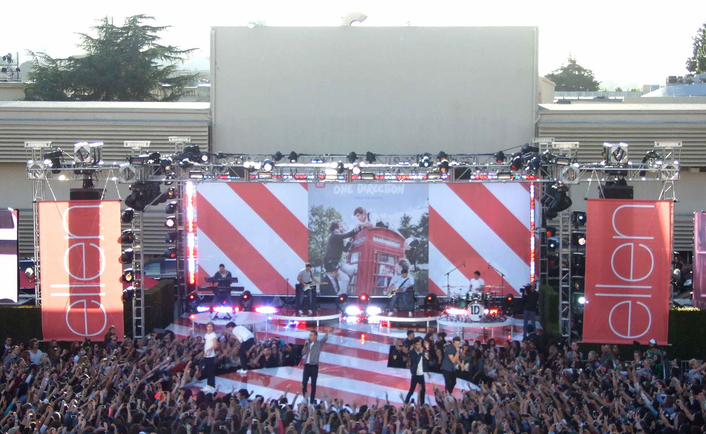 One Direction, which performed less than two weeks later and drew over 5,000 screaming fans, utilized a larger system comprised of 18 KUDO – flown nine per side – and 18 SB28, all powered by LA8.

“About four years ago, I told our broadcast clients that we should switch over to an entirely L-ACOUSTICS solution for special events like this because the improvement in audio fidelity would be obvious,” recalls Bill Daly, PRG audio system designer and engineer. “Since making the switch to V-DOSC and dV-DOSC – and later KUDO and KARA – we’ve used L-ACOUSTICS for all of our remote location and special performances like this and never looked back. Everyone has been very satisfied.

“I primarily use KUDO paired with SB28 subs to provide concert sound reinforcement because they combine plenty of horsepower with sweet-sounding, punchy delivery. Ellen’s Taylor Swift performance used the exact same configuration that we deployed for Dave Matthews Band on the show a while back, and it worked just as great as it did before. 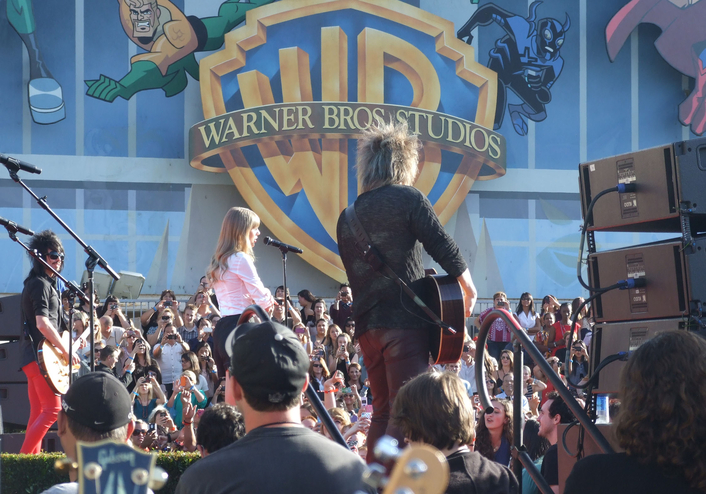 “I also can’t say enough good things about KARA and dV-DOSC, which I rely on for dialog reinforcement. I get such a clear, natural reproduction from them, which is critical for catching all of the funny quips and banter between songs – even when thousands of fans are screaming at the tops of their lungs, which was the case when One Direction was on the show. I’ve been using dV-DOSC and, more recently, KARA for more than ten years now, and I can tell you that precision matters and L-ACOUSTICS delivers.”

L-ACOUSTICS is a leading innovator and manufacturer of high-performance loudspeakers, amplifiers and signal processing devices for touring and installed sound markets. Known around the globe for pioneering and championing the modern line array loudspeaker concept with V-DOSC®, the company has received numerous accolades for its K1, KUDO™, KARA, KIVA™, ARCS®, XT coaxial loudspeaker systems and SB line of subwoofer enclosures, all powered and processed with the LA4 and LA8 amplified controllers in fulfillment of a “total system approach.” Product distribution and customer service for the USA is handled by L-ACOUSTICS’ subsidiary in Oxnard, California.