Polecam Proves its Live-Stage Transparency with Kings of Leon

Kings of Leon is an American rock band formed at Mount Juliet, Tennessee in 1999
Kings of Leon, one of America’s most popular rock bands, has completed a highly successful European stadium and festival tour with Polecam’s narrow-profile compact camera crane.

KOL chose the Polecam system for its ability to provide dynamic long-reach closeups of the band from the stage front without obscuring the audience’s view of the live performance. The band’s Touring Video department uses a Polecam in the skilled hands of operator Michael Cordier.

“As the tour continues, we are having to adapt to every new venue,” explains Phil Woodhead, head of KOL’s Touring Video department, who began promoting the use of Polecam at the beginning of 2011. “It's okay when we are running our own stadium show because then we call the shots. When we go to festivals, however, we have to work very closely with local TV companies who may be shooting for broadcast. Each festival site manager said ‘No’ to the Polecam at first but, once the rig was in position and there quite were obviously no sightline issues or safety issues, we were given a wholehearted ‘Yes’. 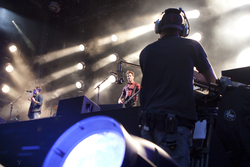 “I was actually congratulated at the Roskilde festival in Norway for being the first person to be allowed to use a long-reach jib anywhere near the stage or audience.  I'd love to say it was because of my wonderful wit and charm but it was all down to the fact Polecam does what its manufacturer claims.  If we had used any other type of jib we would have been screwed.

“Touring operator Michael Cordier knows the rig very well and his interaction with the band is great. Before we began using Polecam, the band members were shy and backed away from cameras. They now actively use Polecam as in effect their personal perform-to camera. This is great for me as the director because the shots just keep getting better.

“Michael not only operates Polecam but is one of the best LED-screen techs around so he is always needed after the show to help de-rig the displays.  It takes him 15 minutes to de-rig Polecam safely and securely. That would be impossibly fast with any other camera support system of comparable reach.”

"Polecam has proved very cost-effective for touring. There is always the need to multitask and Polecam fits in to that protocol very well.  I look forward to keeping the Polecam name high on the list of many tours to come."

The KOL deployment includes four Toshiba IK-HD1 minicams.  These and the Polecam are all operated from a single remote control panel which saves a lot of space in the racks.

Kings of Leon is an American rock band formed at Mount Juliet, Tennessee in 1999. The band consists of brothers Anthony Caleb Followill (lead vocals, rhythm guitar), Ivan Nathan Followill (drums, percussion, backing vocals) and Michael Jared Followill (bass guitar, backing vocals), with their cousin Cameron Matthew Followill (lead guitar, backing vocals). Kings of Leon achieved initial success in Britain with a total of nine Top 40 singles, two BRIT Awards in 2008, and all three of the band's albums at the time peaking in the top five of the UK Albums Chart. After the release of Only by the Night in September 2008, the band achieved chart success in the United States.

A majestic show: grandMA for Kings of Leon
Formula 1 in Abu Dhabi: g...gs of Leon and Aerosmith
First Ever 3D Music Festi...the Skquattro for Support