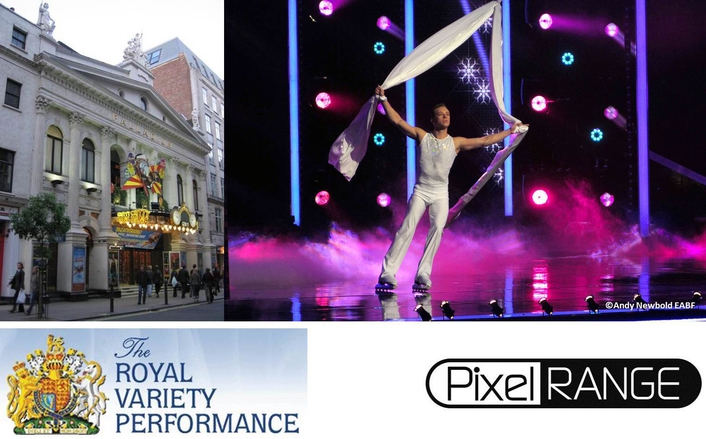 The PixelSmart luminaires, 24 in number, were positioned facing straight out towards the audience
The Royal Variety Performance held annually at The London Palladium Theatre is a vast, live command performance showcasing over 30 acts in the presence of HRH Prince of Wales and the Duchess of Cornwall.

Undertaking the lighting design for a rarely offered second year, Lighting Designer Steve Nolan and associate Tim Routledge, jumped at the chance to use the newly launched PixelSmart from PixelRange because of its unprecedented versatility.

“When you have so many different acts to manage, you need as many tricks up your sleeve as possible – and the PixelSmart certainly helped with that. It can do so many different things. It can be a wash light, it can be an effect, anything, but we used it mainly as ‘sparkle’”

The PixelSmart luminaires, 24 in number, were positioned facing straight out towards the audience –distributed across four lighting towers at the back of the stage. Controlled via a Grand MA lighting console, Tim explains, “Instead of talking to the PixelSmart as one light, it became 25 lights because of the individual sections within. So I was able to control each individual element within the PixelSmart as an individual light. 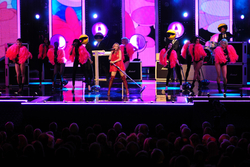 “Being able to address each colour of each LED, I could make shapes – it is so flexible. So, for Kylie, we created little Pacman shapes that were dancing around! It gave us something different for each act.

“Taking advantage of the warm white LEDs we were able to create slow, ‘tungsten-y’ eye-candy in the back of shot for Jamie Cullum. Featuring both a warm and a cold white in the one fixture is very helpful, we could create a warm sense on stage as well as the modern stark white electronic pop look.”

PixelSmart is the very latest innovation from LED lighting Pioneers, PixelRange. The fixture is comprised of 13 CREE XPG warm white LED's alongside 12 CREE MCE Quad LED's RGBW, giving the advantage not only of a vast spectrum colour palette but uniquely, a choice of whites. Brilliantly cool (XPE) white or golden warm (XPG) white.

PixelSmart’s LED configuration gives a total of 61 channels and each one is individually addressable. So each colour of each LED can be controlled in any combination at a given time, making it simple to create light shapes other than the traditional beam. With no limitations, arrays of layering can be created via media server or lighting desk, incorporating the further 40 internal chase effects.