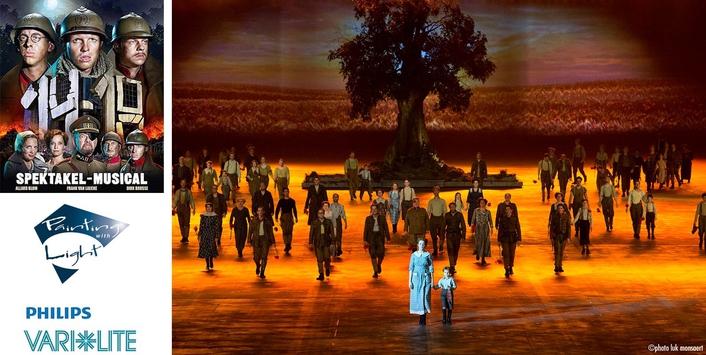 Lighting and visual designer Luc Peumans specified the fantastic gobo selection + brightness of a range of Vari-Lite luminaires
Lighting and visual designer Luc Peumans says that the powerful yet discreet VL3500Q Spot luminaires were the "perfect choice to highlight the action on set" for his latest theatrical production 14-18 Spektakel Musical, which saw audiences immersed in the heroism and struggle of the First World War on an incredibly large scale.

"I like the VL3500Q Spot luminaire's power, its amazing framing and optical quality and its reliability. In addition, its low noise levels were imperative for this project," explains Peumans. The VL3500Q Spot is a powerful 1200W luminaire that boasts a fantastic feature set and is designed for situations where the absence of noise is critical to the performance.

Through PRG Belgium, Peumans also specified an array of VL3000Q Spot luminaires, VL3000 Wash luminaires and 465 of an old favourite of his, the VL5B Wash, to support his absorbing and naturalistic lighting design.

"I used the fantastic gobo selection of the VL3000Q Spot to create effects on the massive concrete floor, with the VL3000 Wash its ideal companion to deliver all the washes and backlight floods," the designer continues. 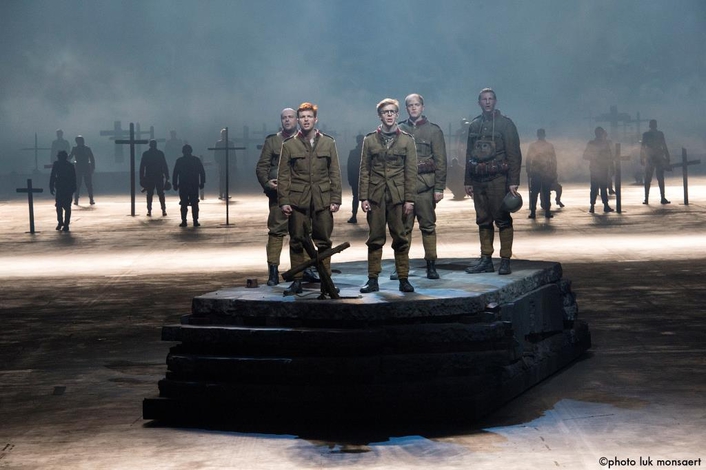 14-18 Spektakel Musical took place in a 150 metre performance area of the Nekkerhal event hall in Mechelen, with audiences seated on a tribune that shifted 90 metres up and down the space.

"The sheer size of this project meant sourcing the right luminaires to optimise the effectiveness of my plan was vital," says Peumans. "The fantastic colours and effects of the Vari-Lite luminaires were absolutely crucial in helping simulate all the locations from hometowns and hospitals to trenches and battlefields and to really make the experience come alive for the audience. In addition, with the venue already earmarked, the idea of using mobile scenery trucks evolved, so I suggested using the VL5B Wash luminaires to conceal the massive set pieces by creating virtual wing space with light curtains."

Peumans used this same concept to mask off different depths along the performance space for when the location of the action and seating shifted up and down, employing the VL5B Wash luminaires to provide great depth and create striking shadows and stark contrasts. A huge network of trussing was installed into the venue, alongside eight 9 metre high scaffolding lighting towers, which ran down both sides of the performance space. 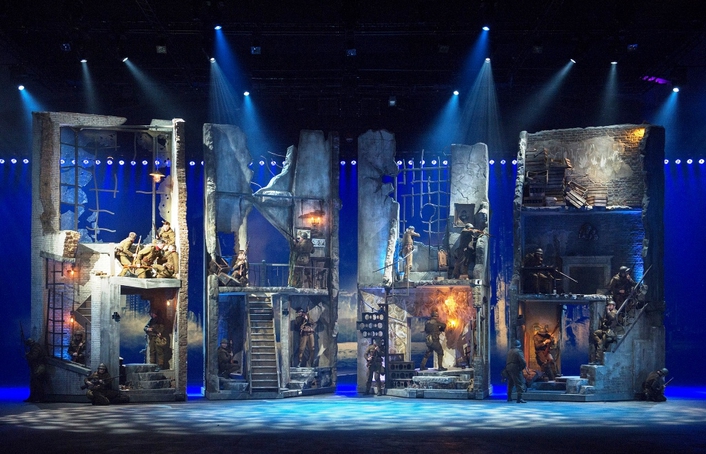 "The VL5B Wash luminaires were rigged on the towers where they were also employed to sidelight the action," says Peumans. "I've always used them and will continue to do so as I really like the special colour palettes available, which were particularly ideal for this show."

14-18 Spektakel Musical also featured a significant video element, with the Vari-Lite luminaires and the projected video backdrops working together as a cohesive creative concept to support the visual picture. Peumans worked closely with the video content designer to create special gobos for the VL3000Q Spot that delivered visual effects such as explosions.

"For me, Vari-Lite luminaires are the superior luminaires on the market for power and optical quality, not to mention their excellent gobo selection, allowing me to push the boundaries of creativity," concludes Peumans.