Host Marco Schreyl riding on the lady elephant "Marla" into the studio
On Friday, March 15th, the German commercial channel RTL broadcast the new game show "Unschlagbar" (Unbeatable), where the hosts, Marco Schreyl and Sonja Zietlow, presented competitions unlike anything seen before.

3.89 million viewers aged 3 years plus (= market share of 13.4%) watched the performance of the contestants, who claimed to be unbeatable in a particular discipline. Sonja and Marco, who searched for opponents worldwide to compete with the "Unbeatables", checked out the challengers carefully in advance.

Dany Hagel competed in the discipline of "power drying" and claimed that nobody could dry a soaking sheet quicker than she could, due to her special wringing-out technique. In a direct duel, in which the object was to wring out a wet cloth as much as possible within the game time, her surprise opponent defeated her. A female African elephant (named "Kenia") used her body weight to wring out the cloth and secured victory for host Marco Schreyl.

The young German women’s champion in speed climbing, 17-year-old Hanne Schaechtele, from Neckarsulm, claimed that nobody could climb up 16 yards more quickly than she could. She won the duel, human against animal, in which a capuchin monkey competed against her on the climbing wall that was built into MMC’s Coloneum Mall. In the finale, however, the record holder for hook-ladder climbing, Tom Gehlert, defeated her and won 50,000 Euros. 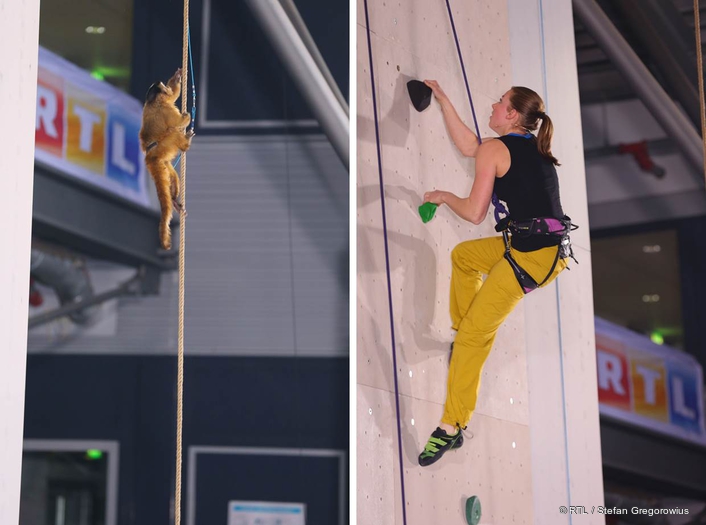 Production:
"Unbeatable" is a production by Endemol Germany and is produced on behalf of RTL in the MMC studios in Cologne-Ossendorf. Ladislaus Kiraly directed the show premiere.

Preparation of the competition "Speed Climbing" at MMC’s Coloneum Mall

For recording the competition "Goal-Kicks in the Dark," infrared technology was required. This game involved a team of two players, shooting as many soccer goals as possible in total darkness. One team member crossed the ball in while the other tried to kick the ball into the goal. During the flight of the ball, between the cross and the attempt to score, the lights were turned off. The shots on goal were recorded with the help of two Canon XF105 camcorders, connected to the control room, and special infrared headlamps in the studio.

The video signals were mixed on a GVG Kayenne XL (3.5 M/E) at MMC’s HD control room 11. The playbacks were carried out via four channels on a Grass Valley Summit Server. One EVS XT2 was used for the highlight editing and the Super SloMo. For the recording, ten Sony XDCAM VTRs were available. 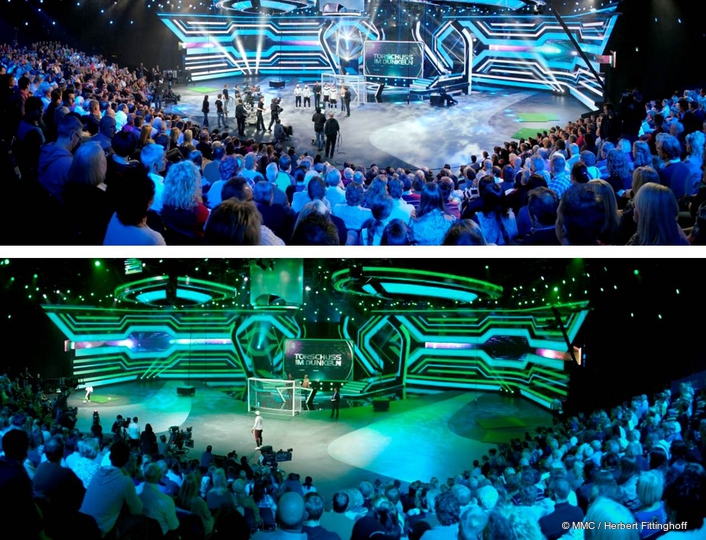 "Unbeatable" competition "Goal-Kicks in the Dark" at MMC Studio 32

For the impressive "Unbeatable" set, which was designed by Juergen Hassler, an amazing 1750 yards of LED strips were installed. A further highlight was the spectacular appearance of the competitors. They were hovered onto the stage in a freely moveable, futuristic elevator.