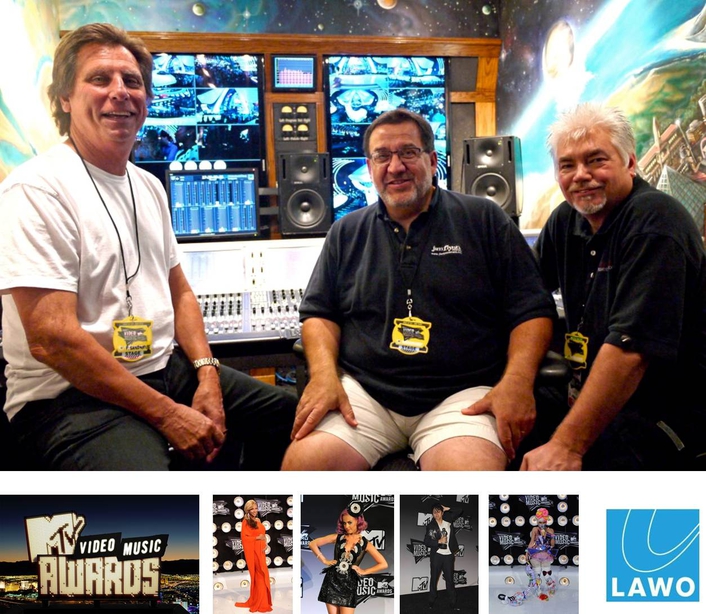 Paul Sandweiss, Jay Vicari, and Marc Repp (left to right) inside MTV’s Remote Unit 8 truck
As it has since 1984, MTV produced the 2011 Video Music Awards (VMA) show to honor the best in music videos. Held at the Nokia Theater in Los Angeles on Sunday, August 28th, this year’s event had numerous highlights that are destined to keep people talking for months.

In addition to the tribute to Britney Spears, Lady Gaga’s shocking outfit and her attempt to smooch Britney Spears before an audience of millions, and Beyonce’s revelation that she’s pregnant, Katy Perry won top honor for Video of the Year while Justin Bieber won in the category of Best Male Video. Without question, this year’s show had ‘something for everyone’ and, to ensure the best possible audio quality throughout the entire presentation, the show was mixed on a Lawo mc²66 production console.

Outside—adjacent to the Nokia Theater—MTV Networks’ Remote Unit 8 mobile recording truck was at the heart of this year’s VMA show from an audio production perspective. Remote Unit 8 is equipped with not one, but two, Lawo mc²66 digital productions consoles. Handling the main music mix on the show, the larger of the two desks has 48 main faders plus 8 additional faders for the master section and is stocked with 8 DSP cards in the system’s core. Additionally, the console is setup for use with Lawo’s Plug-in Server. Designed as a dedicated environment for VST-type audio processing plug-ins, the server facilitates seamless integration with the mc²66 while providing greater flexibility in the use and routing of processed signals—all while freeing the host recording platform from the system overhead typically associated with numerous plug-in processors.

Remote Unit 8’s second mc²66 console is configured with 16 main faders plus 8 additional faders plus 3 DSP cards in the system’s core. On this year’s VMA’s, the smaller of the two consoles was used to mix the house band and whatever other live music was used going in and out of commercials.

“First and foremost,” says Repp, “the Lawo mc²66 is, without a doubt, one of the most intuitive, user friendly mixing consoles available anywhere. Having all the features in the world means very little if the desk is tough to grasp conceptually, and this is where the Lawo boards excel. The mc²66 makes it easy for guest engineers to get up to speed quickly. For Paul, it had been almost a year since he was last on this desk, but because of its ease of use, Paul was able to sit down and, in just a few minutes, move around the board as though he used it all the time. Jay is equally upbeat about the design of the mc²66 and has become a vocal supporter of the console.”

In addition to its intuitive operation, the mc²66 console’s snapshot automation is a huge feature that was used extensively during the VMA Awards. “I love the way snapshot automation is implemented on this desk,” Repp said. “We took 1-2 snapshots for each and every musical act on the show. This makes it very quick and easy to recall the right mix settings for every change of act. Everything was recorded to multitrack, which for us, involves two 144 channel Pro Tools systems—one for redundancy. When you take the ease of operation, the snapshot automation, and Lawo’s AMBIT processing power, you have an unbeatable combination.”

Lawo’s AMBIT upmix tool is a new DSP module available on Surround channels. Extremely easy to use, AMBIT offers the ability to convert stereo sources to 5.1 surround. AMBIT features algorithms such as Lawo’s Auto Centering function, a special front processing algorithm designed to achieve a stable front image, and Lawo’s rear processing. AMBIT 5.1 Upmix is available on any number of Surround channels simultaneously and is processed in real-time with extremely low latency.

“AMBIT was extremely usefully during the VMA’s,” Repp explained. “As we’ve done for the past 5-6 years, we recorded the show in 5.1 surround sound. The Lawo AMBIT section, which enables us to take a stereo signal and expand it to 5.1 channels, helped us immensely. This tool enabled us to take some of our stereo reverbs and convert them to 5.1 for use with the 5.1 mixes we were making.”

Before turning his attention to his next project, Repp reflected on the VMA Awards show and the role that Lawo’s mc²66 consoles played in the show’s production. “I couldn’t be happier with the way everything turned out,” Repp reports. “Other than the usual last minute challenges that invariably pop up on projects of this nature, everything went incredibly smooth. Paul mentioned that he really enjoyed working on the mc²66 and that he’d like to see more of them in the field. The Lawo desks are world-class in every aspect of their operation and design and that’s precisely why we use them.”