"Mrs. Greenbird" at the rehearsals for the "X Factor" finale at MMC studio 32 and after winning the finale
On Sunday November 25th, on commercial channel VOX, the pop duo "Mrs. Greenbird" was voted the 2012 winner of the German edition of "X Factor". The duo received 61.78 percent of the audience votes—and for the first time on "X Factor", the winners performed a song they had written themselves.

Up to 2.3 million viewers* watched the grand finale, broadcast live from MMC’s studio 32.

The charismatic acoustic duo "Mrs. Greenbird" celebrated their start into the music business with the "X Factor’s" winning song "Shooting Stars & Fairy Tales", which they wrote together with Chris Buseck and Duncan Townsend.

Sandra Nasic, the lead singer of the band "Guano Apes", said about her protégés’ success: "I am extremely proud of both, they are so unique. They convinced the audience with their authentic nature and their exceptional music.”

At the final show, a dream came true for all of the finalists—they all got the chance to perform together with world-famous music stars. "Mrs. Greenbird" performed with megastar Alanis Morissette her worldwide hit "Ironic". Melissa Heiduk sang the hit "Closer" alongside the three-time Grammy winner, Ne-Yo. The German rock singer Björn Paulsen was totally convincing with his live performance of the hit "Fallschirm" (Parachute) together with Fallschirm’s creator, the electro pop band MIA from Berlin. In addition, star producer Moses Pelham was awarded an exceptional and emotional premiere: for the first time in 13 years, he stood on stage with Xavier Naidoo, and together, they performed a song at the finale of "X Factor".

The Production
The finale of "X Factor", as well as the three previous live shows in this season’s final round, was broadcast live from MMC’s studio 32. The broadcast was on behalf of Grundy Light Entertainment.

A total of 12 cameras were used for the HD-production, which was directed by Bastien Angemeer. These included six Grass Valley (GVG) LDK 8000 cameras (equipped with Canon EFP 27x to 86x lenses) on Vinten Quattro pedestals, one GVG LDK 8000 camera with a Canon 11x lens for a total view, two GVG LDK 8000 handheld cameras with Canon ENG 14x lenses, one GVG LDK 8000 elite wireless Steadicam with a Canon ENG 14x lens, one Spidercam and one Sony P1 camera on a remote head in front of the jury.

The video signals were mixed on a GVG Kayenne XL (3.5 M/E) at MMC’s HD control room 11 and transmitted to a playout center in Cologne via two separate fiber optic routes.

The playbacks were carried out via two channels on a Grass Valley Summit Server. One EVS XT2 was used for the highlight editing. For the recording, two Sony XDCam VTRs and three Summit Server channels were available.

At the live shows of the final round the new wireless system Digital 9000 by Sennheiser was used for the first time. This system was launched by Sennheiser at the IBC in Amsterdam in September 2012, and can transmit completely uncompressed audio.

MMC’s Art Department built the complex "X Factor" stage in MMC’s studio 32, based on a design by Wieder Design. 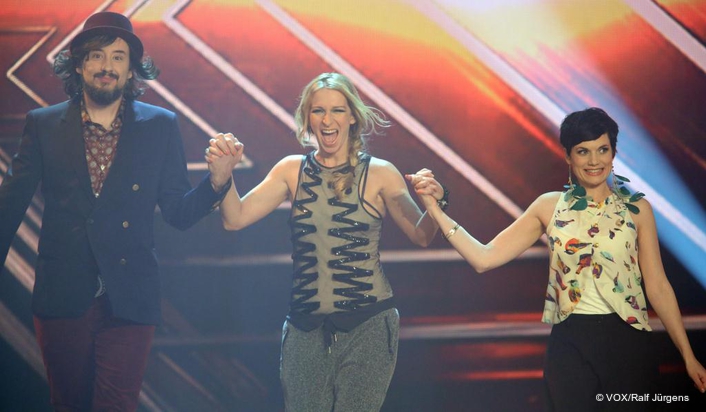