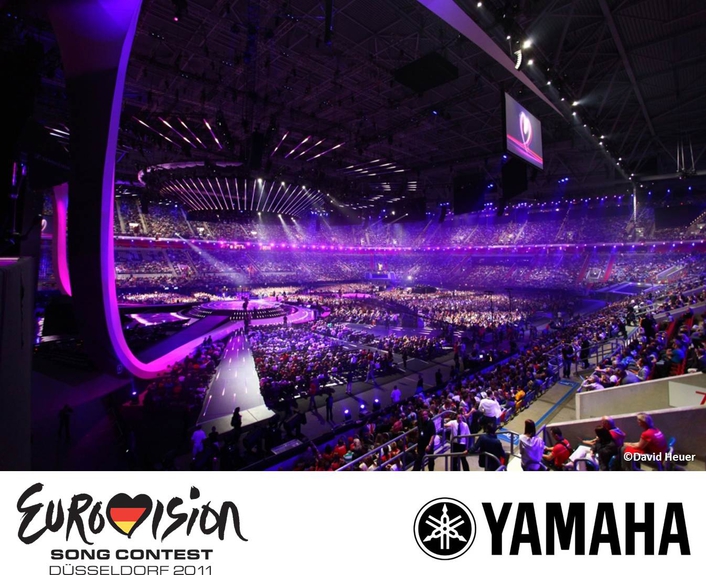 Redundancy was extremely important, as the show was being broadcast live and there was only 45 seconds between acts
From unicycling Moldovan fairies to transparent Italian pianos and Irish twins in giant shoulder pads, the 2011 Eurovision Song Contest delivered a feast of everything that one would expect from this most famous televised event. With widespread agreement that musically it was also the best for some years, more than 20 Yamaha digital mixing consoles helped to ensure that the sound matched the spectacle.

Taking place at the Esprit Arena - a temporarily-converted football stadium - in the German  city of Düsseldorf, the contest featured performances by acts representing 43 different European countries and was televised live to an audience of millions by national  broadcasters Norddeutscher Rundfunk Fernsehen and ARD German Television.

Yamaha worked closely with rental company Neumann & Müller to provide an audio system that would provide both high quality sound and cast-iron reliability. The event’s Senior Sound Engineer (PA), Jochen Jensen, approached Yamaha’s Arthur Koll, with a view to using a system which had a great focus on redundancy.

“I came up with a concept for the show in June 2010 and we worked on it through to April this year, when we set it up at Neumann & Müller’s premises for four days of testing,” says Arthur. “On 19th April the rig was set up at the Esprit Arena and from then on it was 24 hour working, through the two semi-finals on 10th and 12th May, until after the final on 14th May.”

Redundancy was extremely important, as the show was being broadcast live and there was only 45 seconds between acts, so each of the main consoles had a duplicate backup in place. Thus two PM1Ds were used for monitors, two PM5Ds for the main front of house mix, two PM5Ds for the vocal effects mix and two more for the continuity mix between acts. Separate PM1Ds mixed the performance by Stefan Raab and Jan Delay during the intermission, while the votes were collated, and another PM1D was located in a rehearsal room.

“The rehearsal room allowed artists to soundcheck without using the main stage,” says Arthur. “It featured a full wireless microphone and in-ear monitoring system and, once bands were happy with their sound, it was saved as a scene which was transferred to the main monitor board for their performance.

“It worked really well - not one act asked for any changes to their monitor sound on stage and it freed up a huge amount of time for stage camera rehearsals.”

Although Neumann & Müller’s engineers took care of the show’s sound, Arthur and Yamaha’s Andy Cooper and Ruben van der Goor were always be on hand as ‘babysitters’  throughout the build, rehearsal and show days.

Some of the Yamaha mixing consoles at the FOH Audio

“One of us was always there, just in case we were neded,” says Arthur. “It helped to reassure the engineers and they were very relaxed as a result.

“Only having 45 seconds to reset the stage and load the settings for the next act was a real challenge but, despite the show’s complexity and there being absolutely no margin for error, everyone was in a good mood. Jochen has worked on many shows with us and said it was undoubtedly one of the smoothest!”

ESC 2011: And the Winner is NDR and the whole ESC Technical Team
ESC 2011: 25 Finalists, 120 Million Spectators and Four AURUS
NDR Appoints Presteigne Charter for their Broadcast Equipment Needs at ESC 2011