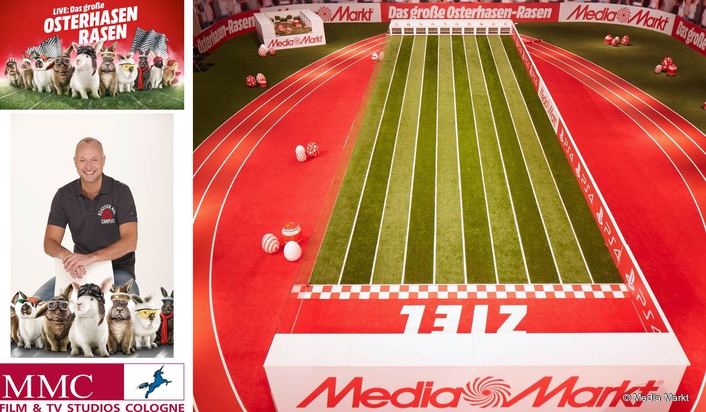 ‘The Easter 2015 Rabbit Race’ produced at MMC Studios in Cologne, Germany, was the first commercial live event ever that was broadcast live and simultaneously by nine of the biggest German private TV stations, and also via live web streaming on the Internet. At the same time, it was the world’s first live sports event for a prime time commercial break. For the organizer, Media Markt, the biggest German electronics retailer, the project was a complete success. Additionally, the rabbit race was awarded a Golden Lion at this year’s Cannes Lions festival.

The Rabbit Race
On April 1st, 2nd, and 4th, 2015, Media Markt, organized the ‘The Rabbit Race’ in the MMC Studios. Ten rabbits competed in a race that was broadcast live during prime time. For the first time on German television, nine of the biggest private TV channels broadcast such an event simultaneously. In addition it was streamed live on the Internet.

The winner of the race determined which Media Markt customers won 50% of their purchase prices back. The sales receipts of the respective day were used as betting slips for the race in the evening.

Next to all the fun of this event, the main priority was the professional supervision of the stars. For this reason, the renowned animal trainer, Renate Hiltl, was in charge of looking after the rabbits. She took great care to make the animals feel at ease.

For the first time, Media Markt opted for a brand new, innovative live commercial format instead of the classic commercial campaigns. For the technical production and the broadcasting of this event, which with regard to its nature and size is unique worldwide, the MMC Studios were responsible on behalf of Endemol beyond.

Ogilvy & Mather was entrusted with the development and implementation of the Media Markt Easter campaign. The marketing communication company was just awarded a Golden Lion at the 62nd Cannes Lions Festival, among other prizes.

Production and Live Broadcast on Prime Time TV and on the Internet
The host for all three live broadcasts, each including a two-minute race, was the famous sports commentator, Frank Buschmann. 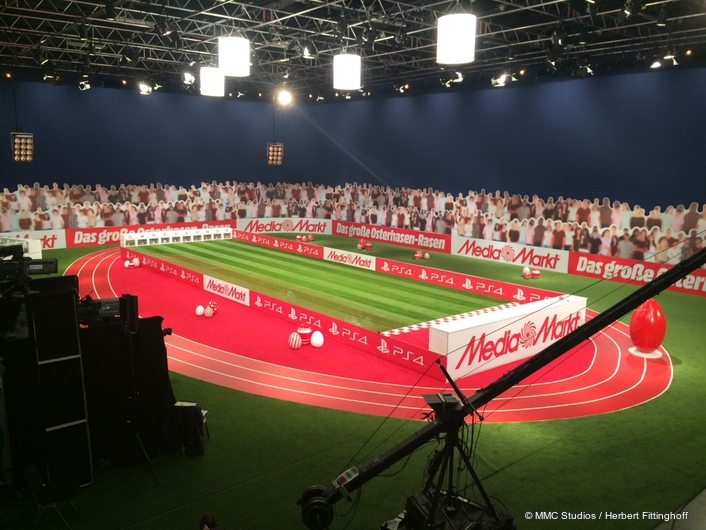 Rabbit Race at the MMC Studios in Cologne

The broadcast on TV started at 8:12pm, on all three racing days. The rabbit races were then transmitted live and simultaneously, on a total of nine TV stations. They could be seen on the following channels: RTL, SUPER RTL, RTL NITRO, VOX, n-tv, SAT.1, ProSieben, kabel eins and Disney Channel.

Additionally, the races were shown live via web streaming on media-markt.de, on the YouTube homepage, and on the biggest German news site—bild.de. The pre- and post-reporting of the event was also shared on mediamarkt.de, from 8:07 to 8:20.

On behalf of Endemol beyond, the MMC Studios were responsible for technical production, broadcasting and live streaming of this special Easter event.

Nico Roden, Sales & Production Director of the MMC Studios, explains: "MMC has been preparing to adapt to the new requirements of cross media productions for some time. The ‘Rabbit Race‘-production, with its extreme bandwidth variants and its various distribution channels, shows us that we are right at the forefront of progress."

Mark Achterberg directed the live event in the MMC Studio 35, where a total of 7 cameras were used.

These cameras included two Grass Valley (GVG) LDK 8000 cameras on studio pedestals, one GVG LDK 8300 Super SloMo camera, one GVG LDK 8000 on a camera crane, one GVG LDK 8000 elite wireless used as Steadycam, one GVG LDX compact camera mounted with a rig for supervision of the racing arena, and one Crosscast X-Fusion high-speed camera with up to 350 fps for the images of the finish.

The video signals were mixed on a GVG Kayenne XL (3.5 M/E) at MMC’s HD control room 11. The playbacks were carried out on a Grass Valley Summit Server. One EVS XT2 was used for the Super SloMo. For the recording, one Sony XDCAM VTR and an Ingest system with five channels were available. 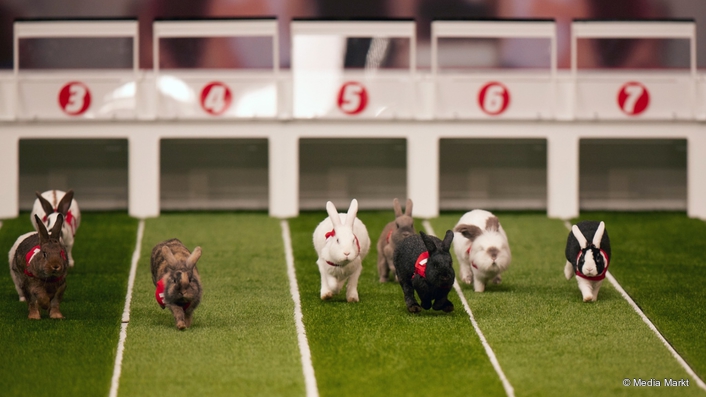 Start of the Rabbit Race at the MMC Studios in Cologne

Apart from the TV production and the broadcasting, the MMC Studios were also responsible for the live streaming. The streaming of the 720p HD signals was carried out with the help of a Digital Rapids encoder. For the clips that were to be available on the Internet after the live event, the respective edits were realized in two of MMC’s post-production editing suites. Thanks to MMC’s proven and sought-after live editing services (Frame Chase Editing), the live material could be edited while it was being recorded.

The MMC Studios were the central point for both, communication and organization, referring to the planning and implementation of this innovative live format for commercials. The organizers particularly benefitted from the advisory services of the live event-experienced MMC crew. Project manager Maria Lorf supervised the production on behalf of MMC Studios.

MMC’s Art Department was in charge of the set construction for the ‘Rabbit Race’. For the event in MMC Studio 35, an entire racing arena, including a 52-foot long and 16-foot wide racetrack, 2,690 square feet of artificial lawn with track divisions, 1,620 square feet of tartan track, a pit lane, as well as a timing system with light barriers, GPI receiver and time display were used.

A curtain of 5,380 square feet surrounded the racing arena. Various digital prints with spectator motifs on the curtain created a stadium-like atmosphere. In addition, MMC’s Art Department built a presenter’s console of PU foam, in the shape of a giant red Easter egg, for the sports commentator. Theo Kings was in charge as project coordinator of the MMC Art Department.

Major Success for ‘The Rabbit Race’
With a total of 21 million viewers in the relevant target groups, the rabbit race became one of the most important sports events of the year, having more viewers than the Soccer World Cup semi-final.

Media Markt publicized the event as an integrated communication package through classical advertising, PR and social media, including a 12-page pamphlet spread on all channels. Apart from all the background information on the event, the website mediamarkt.de and the social media channels displayed data on the ten unique rabbit characters and various reports on the sport stars. Across all channels of the Easter campaign, the event achieved a net reach of more than 200 million contacts in the target group 14+. 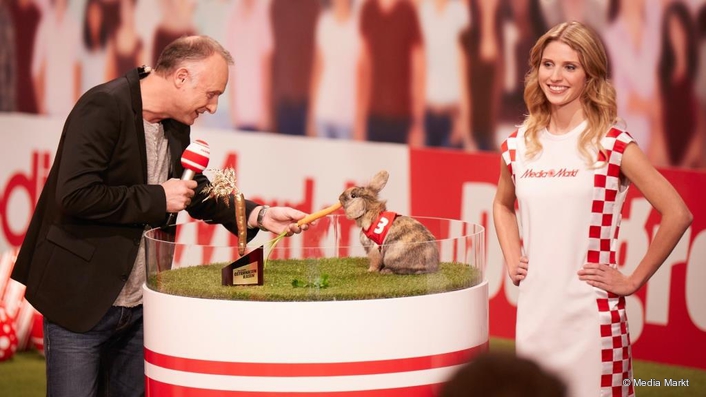 During the Easter rabbit race campaign, searches on Google for the brand Media Markt increased 1,400% compared to last year’s Easter campaign. Facebook also registered significant increases: within the communication period, there were 96,000 Facebook interactions related to the Easter rabbit race. Furthermore, the campaign also had a positive impact on Media Markt’s Twitter account: the number of followers increased by 208%.

About the MMC Studios Köln GmbH:
The privately held MMC operates one of Europe’s largest and most advanced TV and film studio facilities. MMC Studios in Cologne are the hot spot for every kind of moving-image production in Germany. Through its excellent studio infrastructure, state-of-the-art production technology, its highly efficient post-production, an excellent art department for set design and construction, and its experienced staff, MMC Studios Köln GmbH is the leading service provider for entertainment shows, daily soaps, and TV-series in Germany. Furthermore, feature films with national and international stars and a wide range of company events are produced in the MMC Studios. In its Creative Space, web video formats are being developed and produced. eSports and gaming events find excellent production conditions at MMC Studios as well. A total of 118 people were employed at MMC at the end of 2014.