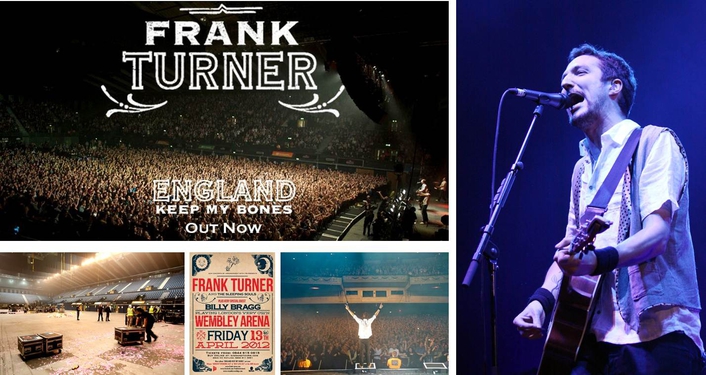 Frank Turner Woos Wembley with Sennheiser
In the seven years since the split of post-hardcore band Million Dead, the band’s lead vocalist Frank Turner has built a large following for his unique brand of folk/punk. April saw him reach a career high with a sold-out show at London’s Wembley Arena, where Sennheiser equipment was much in evidence.

With 12,500 fans barely seeming to notice that Turner and his backing band, The Sleeping Souls, weren’t in one of their more usual theatre-sized venues, the one-off show required a large Sennheiser presence.

Regular sound and lighting supplier Nitelites provided most of the audio system at the show, just asking Adlib Audio to supply an L-Acoustics V-DOSC system. Nitelites supplied a large amount of Sennheiser equipment, including e 840 vocal microphones and e 901, 902, 904s, 905 and MK4s on the drum kit.

“I like the robustness of the 840s,” says FOH engineer and tour manager Graham Kay. “Frank tends to get his mic soaking wet with sweat and saliva, monitor engineer Johnny Stephenson has to clean and dry out the mics on a daily basis which would lead some to deteriorate very quickly. But the 840 seems to stand up to that punishment very well.

“I also really love the MK4s. They don't have the slight metallic sound some condensers have, which can make cymbals sound a bit processed and overpowering. Nigel Powell (Frank's drummer) plays very dynamically, some songs he plays with brushes and just by giving the overheads a little push I can really lift the kit on those songs. I tried a demo pair out on our UK tour last November and ended up buying them rather than send them back. The price of them is amazing, I was expecting the list price to be much more.”

The band’s guitarist Ben Lloyd is also using Sennheiser microphones, a 906 and 421.

“We've just started using this combination. Ben asked to try them, blended 50/50 between the two and it sounds great,” says Graham.

“All our backline crew also had IEM beltpacks used in engineer mode, so they could switch between different mixes. We used a Sennheiser A 5000CP as the systems transmission antenna and it performed flawlessly,” Graham concludes.

ESC 2012: Sennheiser Prov...itoring for the 25th Time
ECHO Awards with Micropho... Systems from Sennheiser
Florence and the Machine ...e the Love for Sennheiser