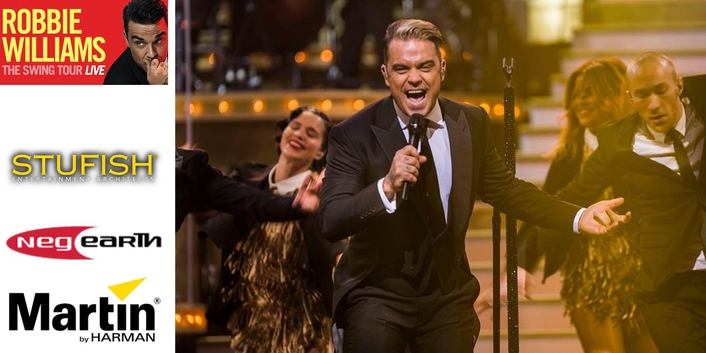 .
It’s all about glitz and glam in Robbie Williams’, Swings Both Ways Tour, which started in May and ends this September. The stage design is theatrical in every possible way. The lighting design, by Mark Cunniffe, is the perfect accompaniment to an inspired stage design and features a substantial rig by HARMAN’s Martin Professional, which is also the first major outing for lighting supplier NEG EARTH’s new stock of MAC Quantum Wash.

Cunniffe worked closely with Set Designer, Ric Lipson from Stufish. Based on Lipson’s initial stage design concept, Cunniffe designed the lighting. He also provided suggestions for additional stage elements, such as the chandeliers “floating” above the stage, which became a major feature of the show and have received a lot of attention. 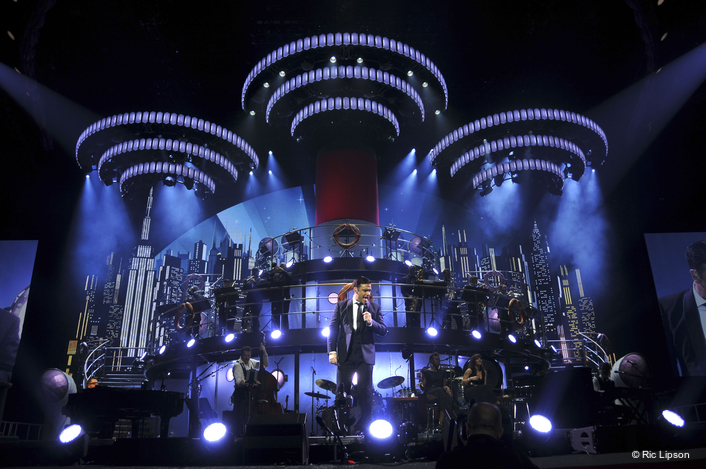 Cunniffe started plying his trade over 20 years ago and has witnessed many advances in lighting fixture design. The rise in LED products requiring less power has allowed him to continue to develop his art in an increasingly eco-friendly way. “I find that Martin’s new MAC Quantum Wash provides me with a very good theatrical unit,” said Cunniffe. “I was lucky enough to get a glimpse of it last year and was totally blown away by its brightness and its color quality.”

Initially Cunniffe thought that he would need Quantums both on the top and bottom of the 90 x 55 ft Austrian drape, but soon realised that the Quantum was sufficiently bright and its beam sufficiently even to light up the whole drape from top to bottom. Another pleasant surprise was how straightforward it was to match the color of the MAC Auras to the new Quantums for the stage elements. Cunniffe recalled:

“We thought there would definitely be a discrepancy because of the age difference in the fixtures,” said Cunniffe. “We use a pallet of around 30 colors - very few pastels and a lot saturated and secondary colors. It didn’t take much programming and the color match between all of the units was excellent.” 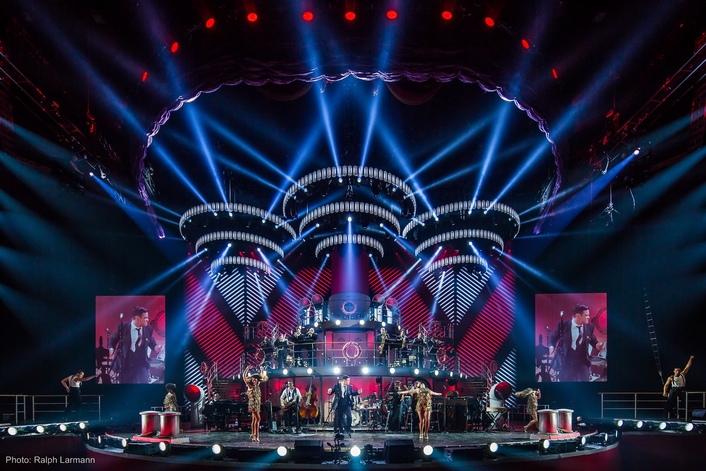 “The original idea was to use MAC Auras to light the Austrian drape,” said Ridgway. “They would have done a good job, but we would have needed more of them. The Quantum is a different sort of light; its wider and more powerful, and it looks great.

”MAC Quantums were also used as audience lighting, mounted as a separate rig. According to Cunniffe, five years ago, no one would have used an LED product as an audience wash light on a show, but the Quantum is perfect for it. “The tungsten values you can get now from an LED fixture are very good,” Cunniffe said. “The Quantums allowed me to do achieve all I wanted to achieve, which is a real testament to it.”

The Tripix range was also deployed in great numbers on the tour. Although essentially an outdoor architectural fixture, it did extremely well on the semi-circular walkway. Initially, Cunniffe wanted to use them solely to get some soft light shining up on Robbie when he took to this part of the stage. “It worked so well that it turned into a stand-alone scenic element of the show, which is also why we saved it for the second act,” he said. “It wasn’t just functional; it was absolutely faultless in an entertainment environment.”

The design process concluded with a three week rehearsal period to test and adjust the stage and lighting design. “Rehearsals can be the most tricky period and the units aren’t necessarily designed to be on for 100 hours straight, but the Quantums performed as well as we could have hoped and overall we are very happy with the quality,” Beverly said.

“The lights came out of the box, they were rigged and they worked,” Cunniffe said. “Everyone involved have done a fantastic job. We also appreciate the help from the guys at Martin UK.” 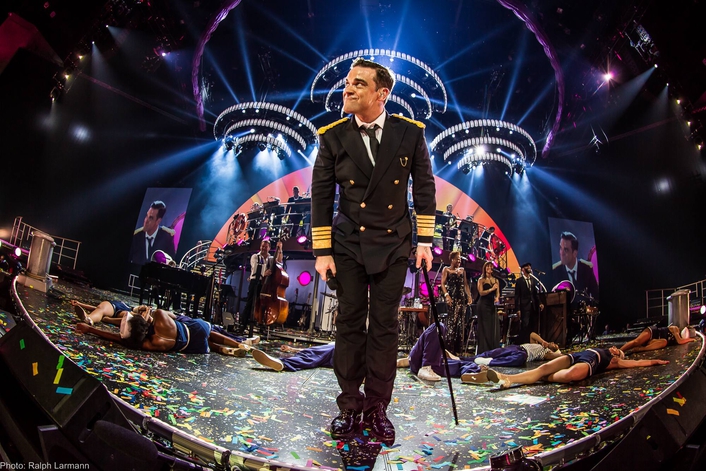 “We don’t often get a chance to come in at an early stage in the production process and help things develop,” said Michael Walker, Sales Director for Martin Professional in the UK. “Although we’ve only played a small part in this incredible production, it’s great to work with such talented people, to experience the challenges and technical demands and to see what happens on the basis of a creative brief. The knowledge we gain from being part of such an epic-scale production, helps us develop new products based on real demands.”

The Swings Both Ways Tour ended September 28th with a final show in Sydney.