Martin Audio MLA, with RG Jones, to Grace the World’s Most Iconic Stage

.
Glastonbury is regarded as the mother of all festivals and has arguably the most iconic of stages. The Pyramid Stage showcases the world’s greatest talent and therefore needs to sound loud, proud and faultless, but it also needs to meet the strict criteria set down in stone by the licence. Attempting to quantify exactly what makes Glastonbury so special is always difficult, but this year there is one further magical ingredient being added to the mix: Martin Audio’s ground-breaking MLA, courtesy of RG Jones Sound Engineering, will grace the Pyramid Stage.

Teaming once again with RG Jones, builds on a Glastonbury relationship that started back in 2008. Glastonbury has become the largest green space open air festival in the world, attracting more than 150,000 festival goers who expect pristine sound and where artists can make, break or further their careers. So when Martin Audio speakers were first specified by RG Jones for the Pyramid stage back in 2008, their combined reputation was put to the ultimate test. But successive years of using the Longbow system proved more than a match, with the full-frequency powerful sound stirring the crowds, the proprietary software system Display™ helping to maintain off-site noise limits, and the combined wealth of expertise of the companies delivering consistently standout moments.

Key to the longevity and pedigree of Glastonbury, however, is that the Eavis family has always demanded the festival remain true to its roots but at the same time bang up-to-date. It is, therefore, fitting that for the greatest gig on the planet that Martin Audio’s MLA will debut this year, bringing forth its sound quality reputation alongside its scientifically proven status to direct sound evenly and consistently across the audience and to control leakage beyond the audience perimeter. 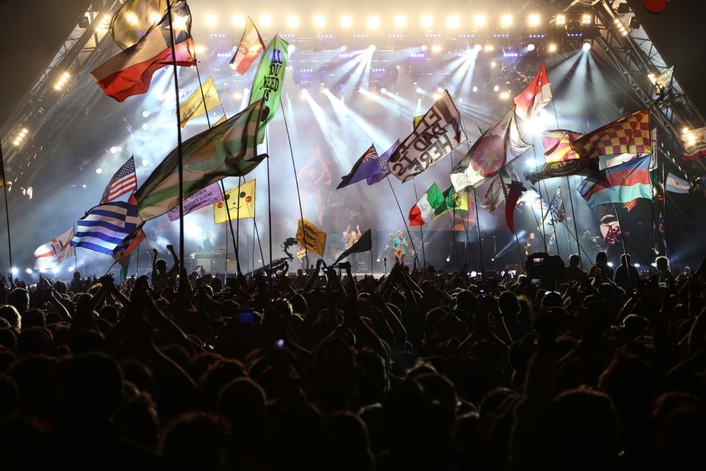 RG Jones was the first UK company to invest in the system in 2012 and has witnessed the system’s growing reputation first hand. As John Carroll, MD, said, “We were not content to follow the crowd when it came to choosing our flagship system.  The MLA is the next generation and there’s nothing out there to match it. The timing seemed right this year and our continued support from Martin Audio is second to none.” With Simon Honywill, Senior Project Consultant for RG Jones, having such extensive experience of the system also helped convince the Glastonbury production team that MLA had earned its rightful place on the Pyramid stage.

Summing up, Jason Baird, R&D Director for Martin Audio, said, “It was my career highlight back in 2008 working on our very first Glastonbury, but I think with MLA this year, it may well be topped. It’s a great endorsement of our system not just for its coverage and control, but because it has a reputation for being such a neutral, uncoloured canvas for engineers to mix upon. With such an eclectic line up once again this year, MLA will more than do justice to everything from Dolly Parton to Kasabian, which is good news for the artists, visiting engineers and of course the audience.”