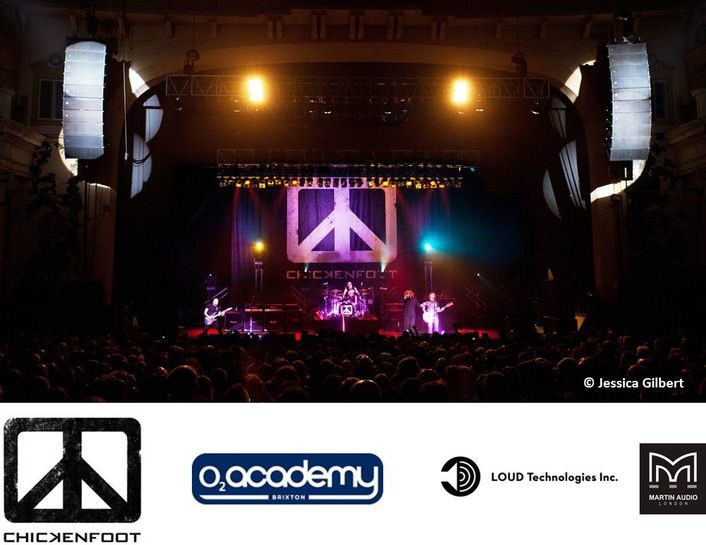 Within this Grade II-listed building ghosts of its cinema past remain, and the bulging balcony fascia has proved the downfall of many a sound system, returning the fire power off the stage, and bouncing the sound waves back at the band.

To the amazement of FOH engineer Michael ‘Ace’ Baker, Martin Audio‘s Jason Baird and system tech, Mark Edwards, simply notched out this chunk of the coverage pattern in the dedicated optimisation software.

“Chickenfoot is one of the loudest bands that have played through the system, so we stood onstage and switched the MLA’s DSP from a setting that didn’t notch it out to one that did, using the tablet PC over the WiFi link,” explained Martin Audio’s R&D director. The difference was plain to hear, with an obvious reduction in reflections off that deep balcony front.

Ace Baker had wanted to pilot the MLA since hearing it in demo in Las Vegas last summer. Sensing that his monitor engineer Jim Jorgensen was about to join Martin Audio he applied pressure — so that by the time production arrived in Brixton there were nine MLA elements and an MLD Downfill ready to be rigged each side, with six MLX’s ground stacked on either flank.

“I had been hugely impressed with MLA and could see the math behind it, but there’s only so much you can learn under demonstration conditions… I had to get the system out there,” declared Ace.

“Some people were doubting whether this was a true rock ‘n’ roll box — but this is one of the most rocking boxes I have ever mixed through. In fact it is a true  concert arena PA, capable of producing a ‘big’ PA sound rather than just pumping out pure volume. I noticed it particularly around the kick drums and toms and yet I’m barely tickling it, there’s just so much headroom.” 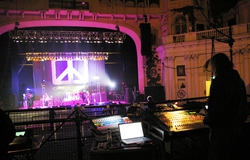 He was also amazed that despite the consistency of coverage in the house, none of it was blowing back at the band onstage. “That’s what got me so excited. Initially, all that computer stuff looked like something I wouldn’t be able to handle, but then Mark showed me how simple it was — all you need to be able to do is measure correctly and you are done.”

Baker says that MLA has given him the freedom to exploit “extra places where it can go — the incredible spatial and panning effects that I was running through.”

The engineer started working with rock legend Sammy Hagar four years ago — who in this configuration was fronting a top line-up comprising Joe Satriani (guitars), Michael Anthony (bass, vocals) and drummer Kenny Aronoff (filling in for Chad Smith, who was off with the Red Hot Chilli Peppers).

Prior to that he had put in long shifts with the likes of Bobby Womack and Tower of Power, although his main work has been operating house systems in club residencies.

At Brixton he was able to mix the sound flat on a Yamaha PM5D — and that, according to Mark Edwards, is because MLA sets itself up to produce a neutral, balanced sound. “Because the system is so responsive to system EQ, if there’s a bit too much sub in the room it is easy to notch a tiny bit out.” 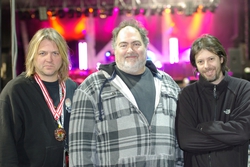 He also commended Martin Audio’s Display predictive software. “The Drag & Drop approach to loading the optimisation is as transparent as it could possibly be and at Brixton I was surprised how little room interaction there was. Overall, I was extremely pleased with the sound.”

As was ‘Ace’ Baker who has now publically stated that MLA has become his ‘go to’ PA.

“There are a lot of good systems out there but only a few have been truly groundbreaking; right now this is the one that has everyone talking about it.

“There will be a lot of touring ahead this year and MLA is the system I want to use from now on.”