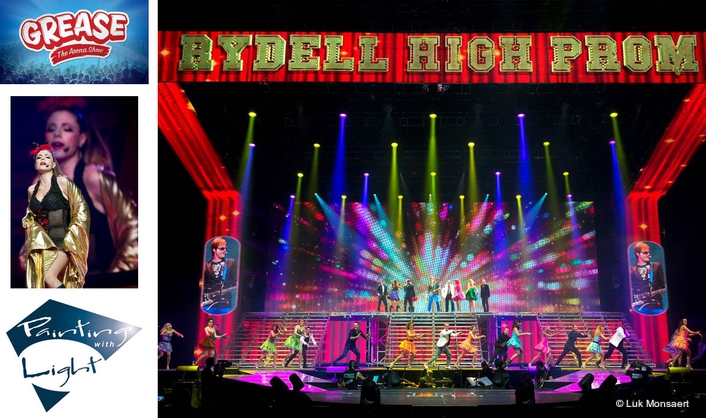 .
Luc Peumans of Belgian creative design practice Painting With Light produced the full visual design – set, lighting and video – for Music Hall Events’ striking new production of Grease which recently played shows in Brussels and Antwerp. Peumans worked in close collaboration with the Creative Director Bart Colby-Doerfler with whom he had also worked on the Holiday On Ice ‘Speed’ show in 2012, and together they developed the concept for this highly visual, contemporary version of Grease.

The idea was to take Grease into the 21st century offering up a really rock ‘n’ roll version of the classic 1950’s high school musical romance, complete with lots of cars, action, energy and excitement. The show also involved some elaborate props, and all elements of the production had to be made tourable for potential work in the future.

Peumans is a bit of a master at designing shows that look fantastic but pack down to almost nothing for travel … almost like magic! 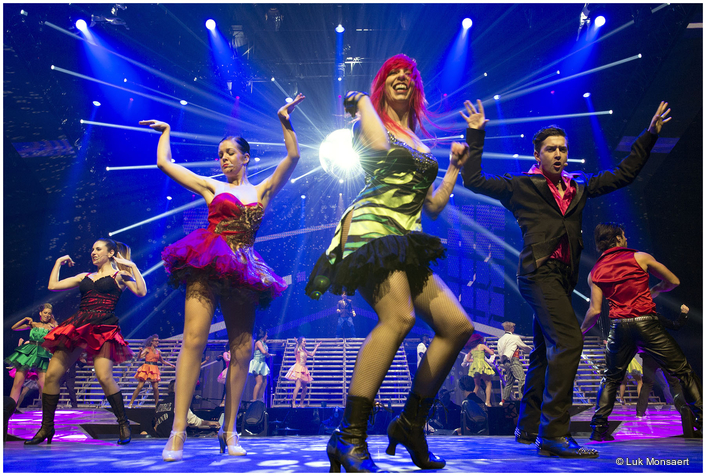 Technical Production was in the hands of Bart de Coensel from The Production Box (who also worked with Peumans on Speed). For practical and logistical as well as creative reasons the set was primarily video based – with over 200 square metres of 16mm LED surface. This provided all the dynamics needed to quickly and effectively change scenes – as well as packing away very expediently.

“The video was central to the narrative and in establishing the locations – as a vehicle of modern scenography, when used properly it is an amazing medium,” says Peumans.

The two main video surfaces were a 20 metre wide by 7 metre high upstage area plus a show portal, which bordered the front truss, ran parallel with the truss line going upstage and then dropped down at a mid stage point, effectively forming a giant interactive pros arch. This adding serious depth to the entire stage space.

The backs of two sets of steps left-and-right of the onstage set were also clad in the same 16 mm video product. - in fact there were six sliding stairs and six pieces of 2x2 metre video panels in the same 16 mm video product also travelling on a rail behind the stairs. Upstage of the upper-deck were two more sliding video panels measuring 4 by 2 metres creating extra depth. 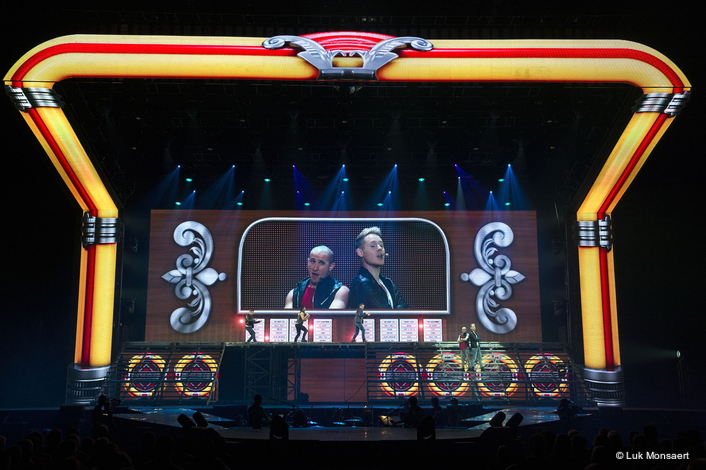 Integrated into the set design was a small B-stage at the front connected to the main stage by two lightning-shaped catwalks. A live band was positioned in the gap between the two stages which were part of the set constructed by Brilliant Stages.

The video concept also incorporated live IMAG camera feeds from  four operated cameras directed by Gerd van Geel, helping to bring the action alive and right out into the audience. 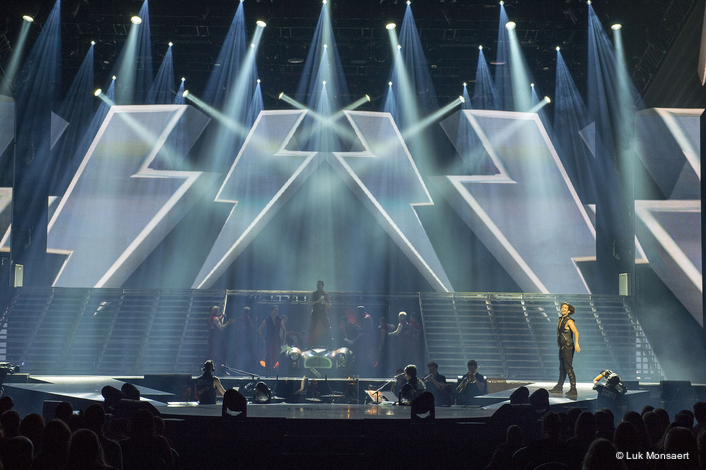 All the video playback content was created by Painting With Light’s Michel Al-Far in consultation with Peumans and Doerfler. This was run via a Pandora’s Box media server programmed by Katleen Selleslagh.

The gap between the downstage set portal and the upstage video truss was filled up with lighting fixtures spread out over four straight trusses.

Above the B stage was a flying platform that descended, and performers stepped into it for the pajama party scene towards the end.

Peumans chose 46 x Martin MAC Viper Performance profile moving lights as the workhorse lighting products, positioned all over the trusses and used extensively for key and back lighting.

Thirty-five Vari*Lite VL3500s did the general colour washing all over the stage and forestage – Peumans really likes their fat beams and lenses, and they also make powerful back lighting effects.

“It’s was a cheerful up-beat show needing vibrant colours and lighting, and with so much LED onstage, I really needed powerful fixtures, hence the choice of Vipers and the VL 3500s,” he explains.

For that same reason he specified 50 x Robe ROBIN Pointes - some positioned overhead and some running parallel with the show portal – picked for their bright and well-defined beams that produce distinctive slices of light and numerous effects juxtaposed against the rear wall of light. 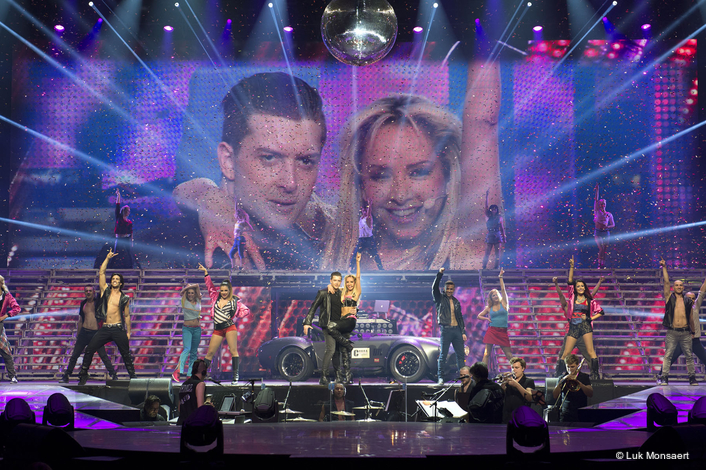 Peumans enjoys designing all visual elements together on a project and having these  under his team’s control. “It brings a real continuity and fluidity to the work,” he comments. “It’s also very flexible, and we have all brought ideas to the table”.

Lighting was programmed by Niels Huybrechts using a grandMA2 full size, and all the lighting and LED screen was being supplied by rental company Phlippo Showlight from Belgium.

The production sound designer is Jeroen Ten Brinke and audio was also supplied by Phlippo.