Live-Broadcast of German Idol's Finale from the Coloneum 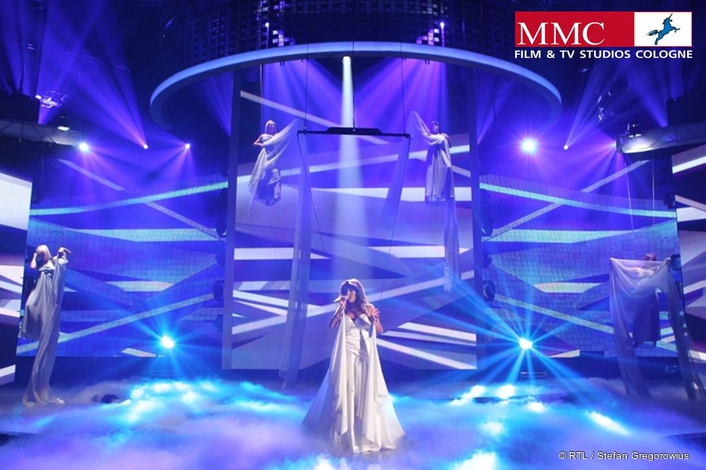 Sarah Engels on the DSDS-stage at MMC’s stage
Pietro Lombardi is the winner of the 8th season of "Deutschland sucht den Superstar" (German Idol). On Saturday 7 June 2011, the 18-year-old singer competed in the grand finale at MMC’s stage 30/31 with his same-aged girlfriend Sarah Engels. In the end, 51.9 % of the viewers voted for Lombardi. He won the contest and a recording contract with Universal Music.

Up to 7.59 million viewers watched the finale of this hugely successful series on RTL. The final show, where the finalists had to sing three songs each, achieved a sensational market share of 36.4 % among the 14 to 49-year-olds (3.46 million viewers on average). On average 6.3 million viewers (aged 3 years plus, i.e. 23.6% market share) watched the show event that was held at the Coloneum. The jury consisting of Dieter Bohlen, Fernanda Brandao and Patrick Nuo was also enthusiastic about the finalist’s performances – but the final decision was to be made by the viewers.

After a break, the decisive show started, and at 12:30 A.M. the decisions of the viewers gave Pietro Lombardi the victory. Up to 6.31 million viewers watched this show. An average of 5.62 million viewers (aged 3 years plus) tuned in (market share: 34.8%). Among 14 to 49-year-olds, 3.44 million (43.8%) watched it. Following the decision, the show "The Finale Party" (presented by Nina Moghaddam) was broadcast. It achieved a rating of 38.3% in the young viewer’s category. On average 3.56 million viewers aged (3 years plus) were watching this show.

An average of 6.38 million viewers watched each of the 23 episodes of the 8th DSDS-season. The show achieved a 32.3% market share on average among 14 to 49-year-old viewers. With that, the 8th season was the third most successful season in the history of DSDS.

11 of the 23 shows of the 8th DSDS-season were broadcast live from MMC Stage 30/31 on behalf of Grundy Light Entertainment. The 11 shows were directed by Volker Weicker.

A total of 13 cameras were used for the HD-production of the final show. These included five GVG LDK 8000 cameras on tripods, two hand-held GV LDK 8000 cameras, two GVG LDK 8000 cameras with an Abakus Stadium Lens or an 11x lens respectively for a total view, one Spidercam and two Sportscams. The video signals were mixed on a GVG Kayenne (3.5 ME) at MMC´s HD control room 11.

A GVG Summit Server and an XDCam VTR were used for playbacks and the highlight editing was done using two EVSs. Eight XDCam VTRs were used for recordings.

The editing for the re-broadcast of the finale was done at MMC’s Editing Suite No. 5.

The impressive stage design at MMC Stage 30/31 was built by MMC´s art department according to a design drafted by Wieder Design.

As with the staging of the show’s individual acts, the show’s technology for recording, editing and broadcast, has consistently involved a high level of innovation.

At the 8th season of DSDS the media technology was massively upgraded. The multimedia bands of the previous years were replaced by a closed surface of BARCO’S MiTrix modules, which covered the whole stage background behind the central ILite 6 video wall. This area was complemented by vertical MiStrip pixel strips on both sides.

The previous positions of the band and the contestants’ lounge were replaced by two vertically parted and kinetically movable OLite walls. Because of the three front LED-surfaces and the MiTrix wall located behind them, the stage seemed deeper than in the past years. The OLite equipment of the towers and of the central ring above the ILite wall remained largely unchanged. The multimedia feed to all areas was handled by Martin VPUs.

As in previous years, Manuel da Costa from mo2 design was responsible for the show’s lighting. There were plenty of innovations this year. The MiStrip pixel strips of the multimedia ceiling in the spectators’ area were complemented by LED strips, which were also attached behind and next to the entire stand.

Additional moving lights on aluminum rods were positioned around the entire spectator block and made it possible to shoot from all directions. As usual moving lights by Martin and Robe were used in the ceiling.

This year the towers on stage were separated. They housed a presenter’s platform on one side and a contestants’ lounge on the other. In this year’s towers, the GLP impression moving lights were flush integrated, and thus invisible.

Besides the very minimized lighting, which was used to create a club atmosphere for the ballads, there were magnificent opening songs with impressive lights effects and spectacular laser shows. The complex matrix in the stage background was flanked by Nova-Flowers at the bottom edge, as well as the entire MiTrix wall and the lateral MiStrips.

For PA and audio engineering, MMC’s technicians built on the concept used the previous year. Due to the absence of a live band, they removed the PM1D system for the spectators’ area, which had been used in past years. Instead they used MMC’s newly acquired Soundcraft Vi1 mixing console. Feeding of the signals was partly done by the built-in RockNet card and the corresponding input units.

The monitor sound was based on last year’s setup with a Yamaha PM1D. As a replacement, the LS 9/16 was used and the system connections were handled by a DME 64. Careful coverage of the entire set via Smaart Live ensured once again the customary high-quality sound experience in the spectator area.

Magic Media Company Goes ...lly HD with Grass Valley
MMC Post-Production Offers Customized Solutions
The Final of A Minute to Win It at the Coloneum