Let It Roll Rocks with Robe 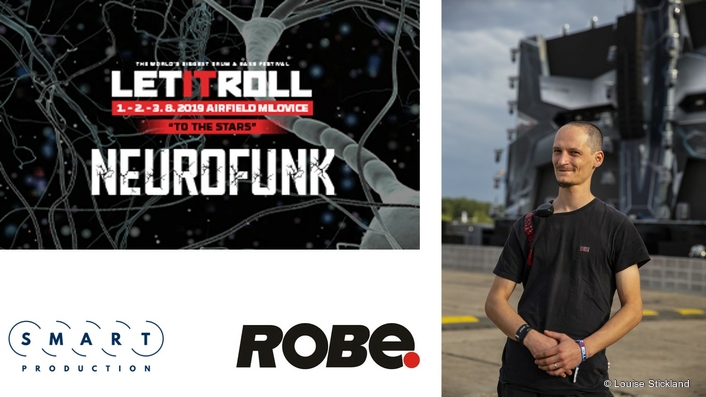 Let It Roll 2019 attracted some of the best and most popular drum ‘n’ bass sounds and artists as 25,000 fans rocked up to enjoy three days and seven stages of DNB mayhem in the atmospheric environment of Milovice Airfield. The former Soviet-era airbase north of Prague in the Czech Republic is tucked away in wooded countryside surrounded by a myriad of winding concealed roads.

The festival has been on the current airfield site for the last five years, growing in popularity and profile … and this year Robe moving lights again played a prominent part in ensuring everyone received a superlative experience. 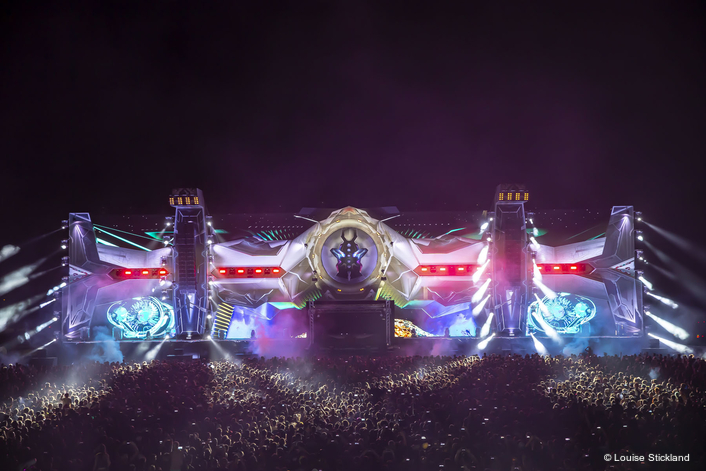 Directing all the ‘Mothership’ (Main Stage) technical production was Pepa Ženíšek from SMART Production, who hand-picked a talented team of creatives and a trusted set of suppliers to deliver another exciting bespoke environment unique to this festival, originally the brainchild of Czech DL and DNB guru, Suki, who is still integrally involved in every aspect of the festival. 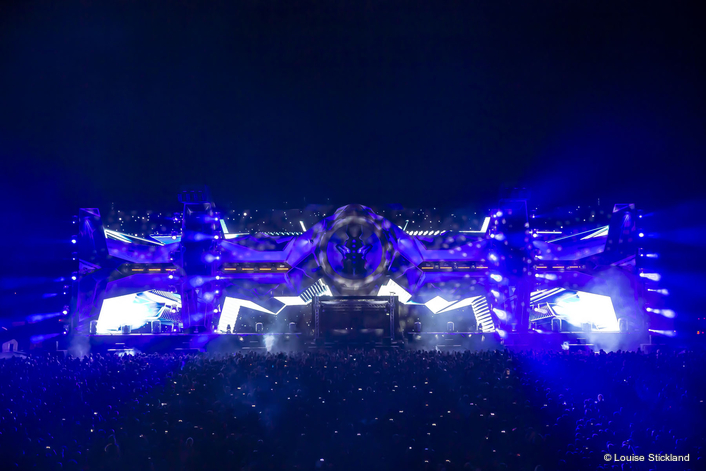 The Main Stage production lighting design was imagined by Ondrej Bylok, who has worked on the event for the last 10 years or so, initially as a lighting technician, and as main stage LD since it moved to this site in 2015.

Lighting is designed to meet the requirements of all the headliners – unlike other festival main stages, they don’t have a succession of visiting LDs and additional specials packages.

For the last two years, everyone has used the ‘house’ rig and lighting for all the sets have been operated by Ondrej and his colleagues. In addition to that, a focal point of the entire festival is the timecoded Opening Ceremony show which takes place on the Friday night. 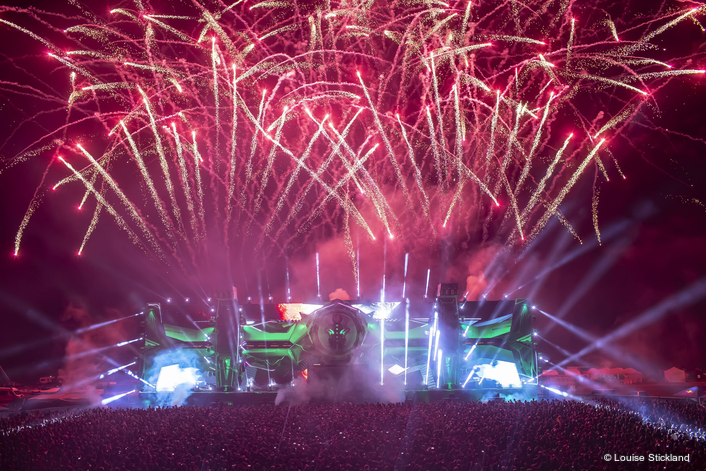 All the other stages stop for the duration of the opening show, and the whole festival population packs into the main arena to catch the spectacle and take in the visual extravaganza and great vibes.

This year Ondrej specified nearly 100 Robe fixtures for the Mothership to cover all the lighting needs – a mix of 38 x Pointes, 12 x MegaPointes, 18 x Spiiders, 12 x Tarrantulas, 12 x CitySkape Xtremes and six BMFL Blades, all supplied by rental company JESA, together with the audio.

For Ondrej, who loves drum ‘n’ bass and has a vast experience of lighting this specific genre of dance / electronic music …  this is a dream gig! 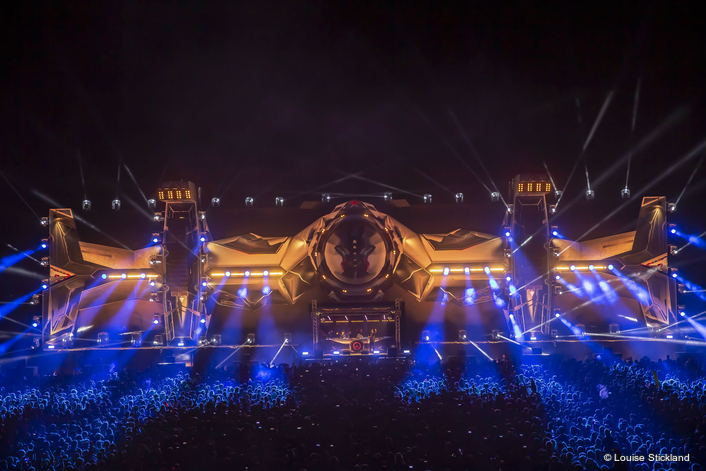 He finds that Robe fixtures – with their speed, brightness and numerous features – are a perfect choice to vibe with and highlight the energy and distinctive beats of DNB and ensure that the audience get immersed in a series of different visual and musical adventures throughout the night – the stage runs for 10 hours straight from 7 p.m. to 4 a.m.

He collaborated closely on evolving the Mothership look with show director and video designer Tomas Nezval and set designer Martin Kana. They have all worked together for a few years now and honed what has become a highly “fluid and productive” creative process.

Let It Roll’s originator Suki, a famous DJ in his own right … is also heavily involved in developing the event’s overall ambience. 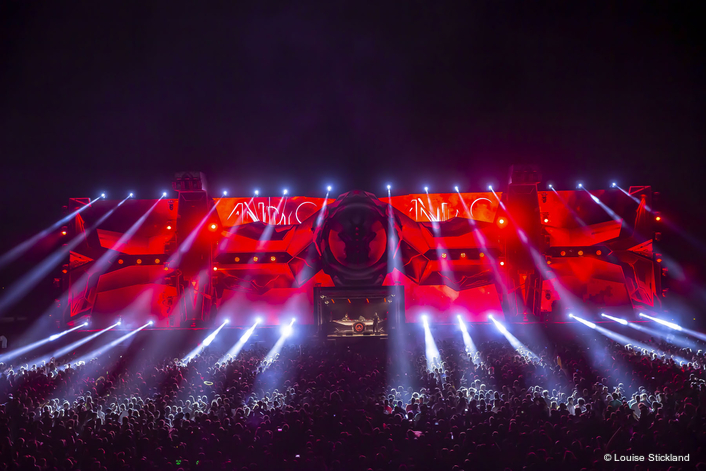 The Festival’s concept follows a narrative based on intergalactic travel and the story of Eva, a space pilgrim traversing the universe whose endeavours led - this year - to the Mothership, a stage that took travellers on a wild journey “to the unthinkable corners of the musical universe”.

Ensuring this incredible trip was stimulating, vibrant and dramatic was Ondrej’s mission with lighting, and he places the Pointes and Spiiders right at the epicentre. 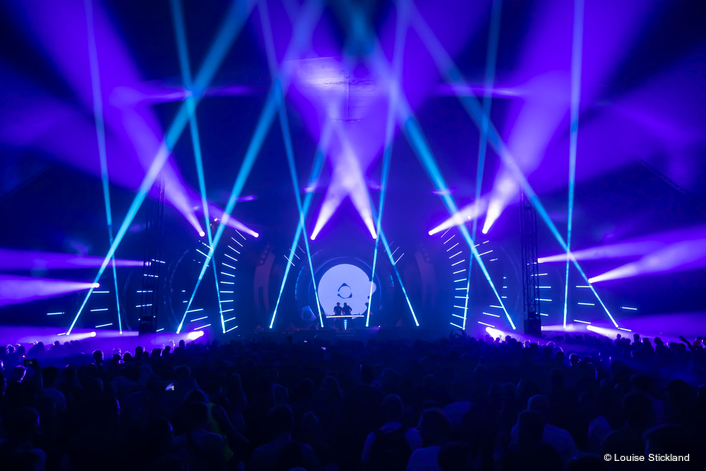 The Mothership design was clean and streamlined, with the Pointes and Spiiders rigged in six vertical columns spread across the 50 metres of stage width. At the centre of the Mothership was a 5 metre diameter inflatable head (which inverted for a completely new appearance on the second day of the show).

The Tarrantulas – Robe’s largest current LED wash beam – were positioned in the Mothership’s engine turbine recesses … and the MegaPointes were in a line on the deck where they could have maximum impact in blasting forward and through the crowd.

The CitySkape Xtremes – a classic Robe architectural LED wash product – were deployed on the floor where they could illuminate the set architecture and decor, which was also lit from the six BMFL Blades positioned on the FOH structure. 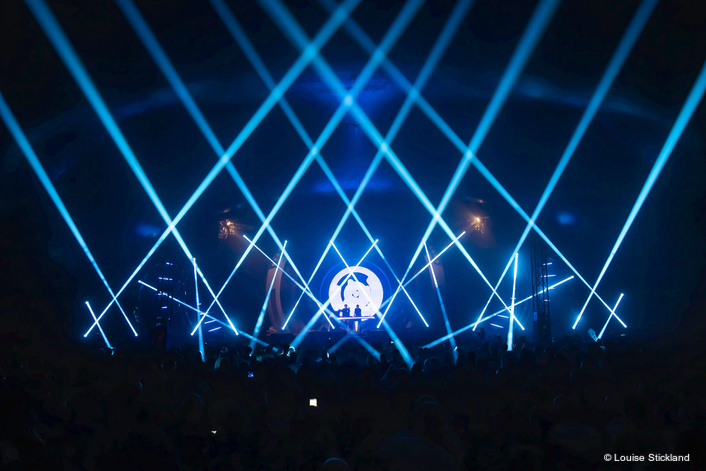 Lighting for the whole 16-minute Opening Ceremony sequence – which is always massively anticipated – was designed to energise and elevate.

Ondrej chose Robe because he feels that these are the tools that give him all the creative options for the job. Also, due to their availability in the Czech Republic – a process that has accelerated rapidly in the last two or three years – he finds that it’s easy to specify and get sufficient quantities for the larger shows.

He likes “The power and intensity of fixtures like the Pointe, MegaPointe, Spiider, BMFL, etc – and the fast movement both of which are essential building blocks for lighting a DNB show.”

He’s been using Robe in his work since the start of his professional lighting career and is extremely proud to be using a Czech brand that is also now a market leader.

The biggest practical challenges for an outdoor show like this are managing the haze during the show so the lighting can have maximum impact, however he also notes that “these Robes look bright even without any haze!”

As always, producing a show to meet everyone’s expectations and fit the budget also requires some thought and nimble thinking: “the show has to look BIG, whatever resources are available.”

He programmed and ran the lighting – which also includes some other fixtures – on a grandMA2 light console.

The Opening Show music track was created by ABIS, Hybrid Minds & Insideinfo, Neonlight, Icicle and Outside Agency and fully timecoded. Ondrej was able to pre-vis and programme for 3 weeks, followed up by two full-on nights of programming and tweaking onsite. 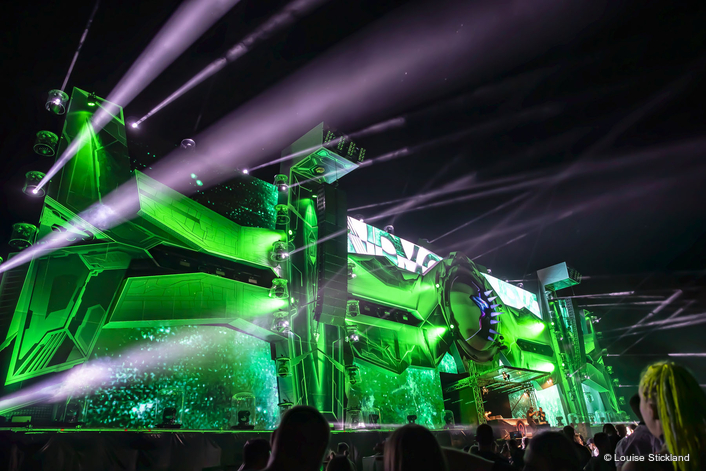 From an overall production perspective, Pepa has everything for the Main stage very organised. The site, with its vast concrete sections that made up the former runway, is ideal for providing a basic festival infrastructure.

He and his production team of three co-ordinate around 30 crew working on that stage. The fact that it is all about design and making a custom experience each year is one aspect making Let It Roll very special, together with the dedicated Opening Ceremony which is always a talking point

SMART’s other regular production suppliers included lasers from Kvant and pyro from Flash Barrandov. Air Works from the Netherlands made the inflatable Mothership head and the rest of the set was built by Czech-based Set Art.