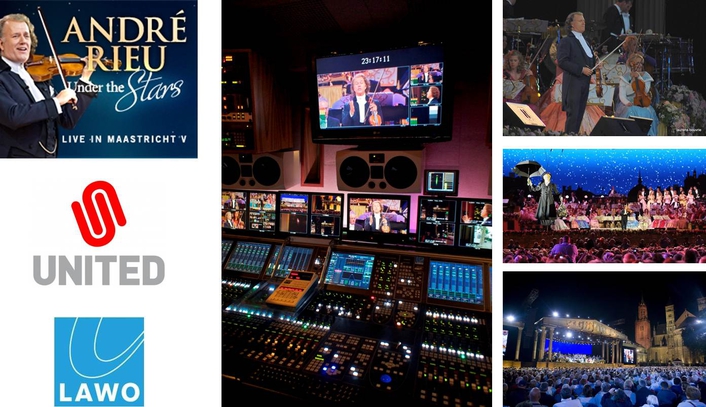 United Studios use mc²66 for cinema and DVD release
Dutch classical superstar Andre Rieu, affectionately known as the 'King Of Waltz', is one of the top-grossing touring artists in the world this year. As usual, the highlight of his live performance calendar is the series of concerts he gives in his home town of Maastricht in the Netherlands, but this year was special – the 25th anniversary of Andre and his Johann Strauss Orchestra performing together. Fans flew in from all over the world to fill the Vrijthof Square for these summer evening concerts, and demand was such that the shows were filmed for DVD and live broadcast to cinemas worldwide.

In Maastricht, OB14’s audio control room was home to Coen Thomas, studio engineer for Andre Rieu, and Huub Lelieveld and Mischa Kortleve of United, working together to record a huge number of channels to multitrack and create the live mix on the mc²66.

With his famous Johann Strauss Orchestra behind him, Andre Rieu performed highlights from the past 25 years, joined by the incredible 150-piece Royal Choir Society Maastrichter Staar. The Orchestra is close-miked, and with so many guest artists and choir singers, the requirement was for a very large number of inputs, 164 channels of audio in all. 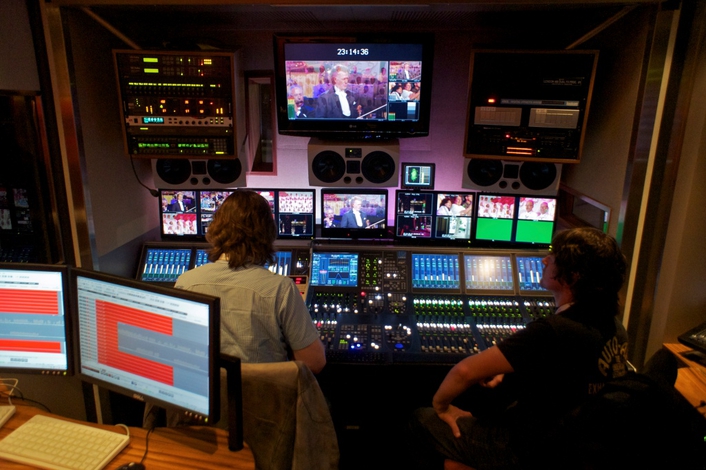 At Coen Thomas’s request, 16 of the 56 faders were repeated over all 6 fader banks, making the most important channels and VCAs available on all banks, while the rest of the channels were in a logical layout, distributed across the desk. On the second layer of the faderbanks, all 164 channels were laid out in chronological order, allowing line checks with PA gain to be done quickly in the sound rental provider’s channel order. This is a feature unique to the Lawo mc²66. As Huub Lelieveld explains, “other audio consoles don’t have enough fader layers. The mc²66 has six faderbanks with two layers, giving twelve layers of faders in total, so it is possible to have a logical mixing layout AND have all the channels available in channel order for line check and gain setting, even with very large channel counts.”

Lelieveld and Kortleve of United supervised the technical aspects of the audio production, recording all instrument and ambience microphones to two (main and redundant) 192-channel Pyramix workstations. Extra MADI ports were added to their system to complement its standard 128-channel redundant set-up, acquiring a total of six MADI outputs to feed the two multitrack systems.

“Lawo is unique in the world of broadcast audio because they have their own rental company,” observes Lelieveld, “so, even if you own a smaller Lawo system, you can easily expand your input and output capability by renting what you need for the project.” Additional equipment was hired in from Audio Broadcast Services GmbH (ABS) , founded as a subsidiary of Lawo AG in November 2005 by Philipp Lawo and now one of the leading rental companies in the audio business, providing audio systems and services for all types of broadcasting applications. 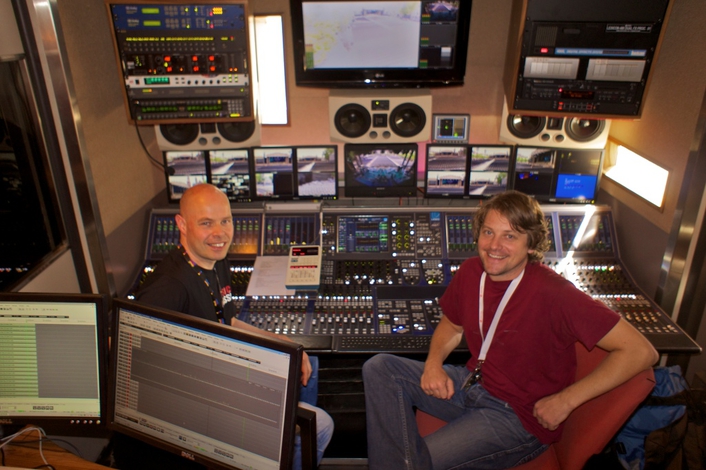 It is the modular nature of Lawo designs that lends itself to such expansion.  United also asked ABS to supply two additional 56-channel Lawo stage boxes, to supplement its own inventory. All the stage boxes were powered from the PA and connected to the truck by fibre, so electrical isolation was assured.

"Since there was no electrical connection between the truck and PA system, no transformers or splitters were needed. The lack of transformers or additional preamp stages of active splitter systems, together with the accuracy of the Lawo preamps and converters, makes for an extremely pristine audio signal, 100% free of buzzes and hums. This is the cleanest and most pure way to split the microphone signals. The Lawo DALLIS frames automatically switch between 110v and 220v which was handy because the PA system was supplied by a Canadian company, who tour all over the world with Andre, and they run on 110v power.”

The 120-minute CinemaLive event was broadcast from Maastricht via satellite to cinemas all over the world on 30 June 2012.