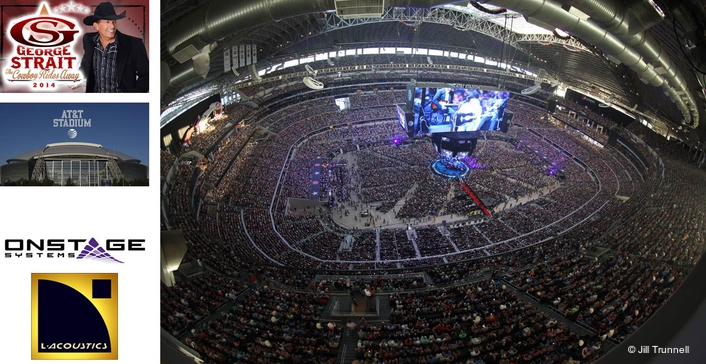 Onstage Systems deploys massive 226-enclosure L-ACOUSTICS rig for the last performance of The Cowboy Rides Away tour
George Strait holds the record for the most number one country music hits – 44 top charters since 1981 – of all time. So it only makes sense that the final show of this music icon’s national touring career would also set a record for attendance. Nearly 105,000 fans attended Strait’s June 7 concert at AT&T Stadium, eclipsing the Rolling Stones’ previous attendance record of 87,500 for the venue in 1981, coincidentally the same year everyone’s favorite singing cowboy launched his professional career.

Dallas-based Onstage Systems, which has been rigging sound reinforcement for Strait’s tours since the beginning of his performing days, pulled out all the stops for the final date on the tour, dubbed The Cowboy Rides Away, powering up a massive L-ACOUSTICS K1/K2 loudspeaker system to fill the stadium, home to the Dallas Cowboys.

“K1 is the premier stadium line array system and we’ve had tremendous success with it in large venues, indoors and out,” says Eric Thomas, Onstage Systems’ audio department lead. “There really is no other system that would get the job done for a show like this and provide the sonic signature that we love. Plus, we were really excited to be using K2 for the first time as well.”

“With 105,000 seats, AT&T Stadium is the hugest of venues,” says George Olson, Strait’s FOH engineer since 2007. “It’s safe to say things are bigger in Texas, and when it comes to musicians, no one here is bigger than George Strait, so we needed a room this large to fit his fans. But it’s a very difficult venue to try to work in. It has to be one of the world’s loudest places with the longest decay time I have ever mixed. That’s why the K1/K2 system was ideal. The K1 with its sheer horsepower and throw was perfect for the bowl seats while the K2, with its identical sound and ability to get 10 degrees of down, was exceptional for the closer floor seats. L-ACOUSTICS has long been a great partner and friend, and I could not have asked for a better system or crew.” 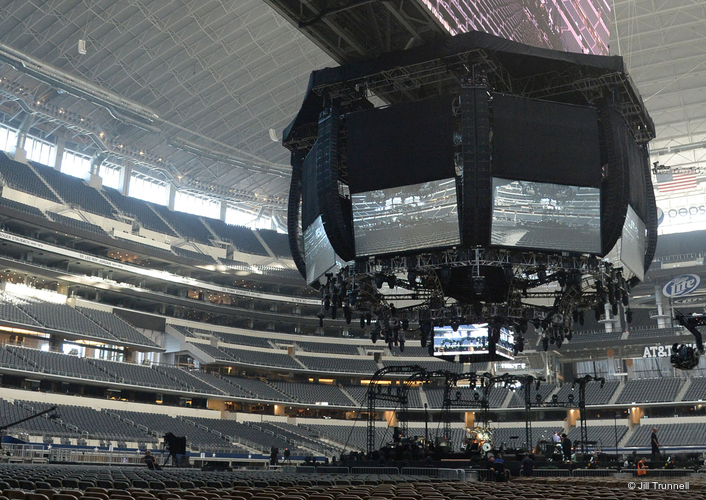 Like most of Strait’s shows in recent years, the stage for the final tour stop was centrally located on the stadium floor and set up in-the-round.  To deliver superb coverage to audiences seated on multiple levels in a full 360 degrees, Onstage Systems deployed a total of 226 L-ACOUSTICS enclosures.

The primary equipment complement for the evening included 104 K1 and 48 K2 line source array enclosures flown in eight arrays around the Jumbotron, 48 SB28 and eight K1-SB subs, and 30 LA-RAK amplifier racks – for a total of 90 LA8 amplified controllers – flown with the arrays.

The system goal with K2, notes Thomas, was “having a bigger, beefier box with the same 110-degree horizontal pattern that never felt like you were walking into two different PAs. It worked great!”

Olson doesn’t underestimate the assistance he received from Onstage Systems’ Thomas and L-ACOUSTICS’ Scott Sugden in designing the system. “I always start with a system design in SOUNDVISION. With this tool, I have a great idea of the response of the system before we even bring it out of the trucks, and, when tuning, I have a response curve that I try to achieve every day. When we get it right, the mix just falls into place. The use of L-ACOUSTICS products makes the job very easy.” 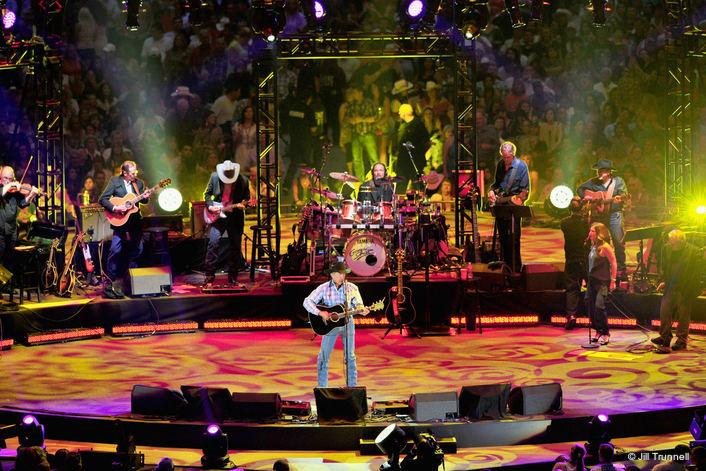 All the effort to achieve pristine sound in the mammoth house was appreciated not only by the 104,793 fans, but also the special guests taking the stage throughout the 41-song concert to duet with Strait. The stars included Kenny Chesney, Martina McBride, Alan Jackson, Faith Hill, Vince Gill, Miranda Lambert, Sheryl Crow and Eric Church, as well as Strait’s son Bubba, all there to pay their respect.

The June 7 show, itself, set a single-date record in ticket sales of $18.2 million, according to Billboard. Strait’s farewell tour’s 44 shows over a two-year span reportedly grossed in excess of nearly $100 million.

While Strait may have retired from touring nationally, he’s not ready to fully kick back, so one can expect to see “King George” still performing on occasion for special performances.