L-Acoustics Heats Up Arcade Fire On The Road

Arcade Fire at Shoreline Amphitheatre in Mountain View, CA: Solotech takes K1/K2 rig on 2014 North American tour legs
Arcade Fire, the Grammy Award-winning indie band from Montreal, has been praised by critics since the launch of its debut album, Funeral, in 2004. Ten years on, the group continues to press the envelope with its sonically adventurous arrangements and tours, which can feature a dozen or more multi-instrumentalists switching between an ever-changing blend of guitar, drums, bass, piano, string quartet, xylophone, glockenspiel, keyboard, synthesizer, French horn, accordion, harp, mandolin and hurdy-gurdy.

When the band was poised to head out on the road earlier this year in support of its fourth and most recent album, Reflektor, FOH engineer Jim Warren and tour sound reinforcement provider Solotech Inc. knew what systems would be up for the challenge: L-Acoustics’ K1 and K2.

In particular, this trek represented Solotech’s first official outing with the manufacturer’s new K2 enclosures, which were typically flown 14 per side as outfill arrays, but also occasionally tapped for main PA in sheds and smaller outdoor venues.

“I was very impressed with the K2, both in its seamless integration into a K1 rig as side-hangs, but equally in its performance as a standalone PA in smaller venues, where I felt its wider dispersion was well suited to venues where a shorter throw was necessary,” notes Warren, who has also mixed FOH for Radiohead, Peter Gabriel and Nine Inch Nails over the years.

“K2 is a terrific cabinet and an amazing product overall,” adds Marc-Olivier Germain, Solotech’s audio system technician for the tour. “Its light weight is one of its best features; you can hang it pretty much anywhere! Rigging is great, and if you already know K1, it’s a piece of cake to work with K2. But that being said, I was also tremendously impressed by the amount of power that comes out of this box for its size.” 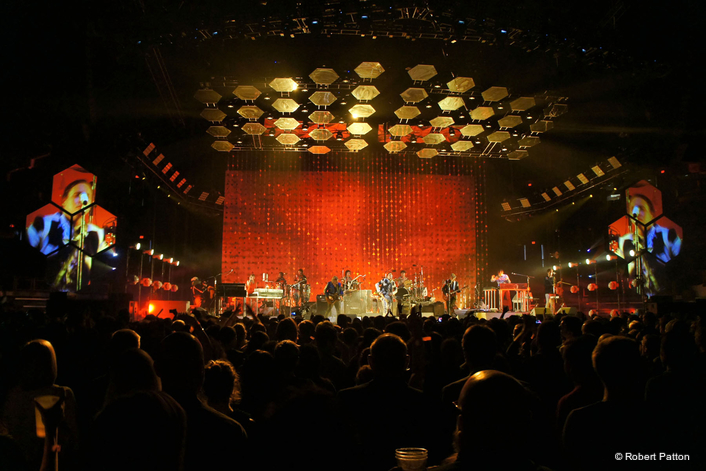 Aside from K2 outfills, Solotech deployed left and right main arrays of 14 K1 enclosures, each with six KARA for downfill. Eight K1-SB low-frequency extension cabinets were flown on the outside of each main array, with a total of 16 SB28 subs groundstacked below for low-end punch. Additional loudspeakers deployed included: six KARA front-fills positioned across the deck; 16 ARCS flown as a full 360-degree “donut” over the B stage for pre- and post-show DJ performances; 12 KUDO delays (first leg only); 52 LA8 amplified controllers; and three self-powered 108P plus one SB15P at FOH for nearfield monitoring and shout.

About L-Acoustics
Founded in 1984 near Paris, France, L-Acoustics is a leading manufacturer of turn-key solutions for the professional sound industry.  With 250 team members, 20 percent of which are dedicated to R&D, L-Acoustics is present in over 60 countries either through subsidiaries or via a network of certified distributors or providers.
Recognized throughout the industry for pioneering the modern line array, L-Acoustics offers a total system approach for both the touring and fixed installation markets, and a product line responding to the needs of venues from the most intimate club to the grandest arena.  L-Acoustics sound systems can be heard in places like the Hollywood Bowl, the NBA Houston Rockets Toyota Center, or the Philharmonie de Paris.  L-Acoustics solutions are used in six of the world’s ten top-grossing festivals, at the London and Sochi Olympics, or on the Justin Timberlake 20/20 Experience World tour among others.