All the draping elements have been custom designed and built by Hitchin based Brilliant Stages
Two different elements of Kinesys automation are in action on Robbie Williams’ highly acclaimed Swings Both Ways tour, one for lighting and the other for the set / drapes department, both being controlled by a single Kinesys Vector system operated by Gareth Williams (no relation!).

The tour’s spectacular scenic aspects and lighting has been designed by Show Directors Lee Lodge and Willie Williams and LD Mark Cunniffe.

Lighting includes three eye-catching chandeliers above the stage, each constructed from three concentric semi-circular trusses and flown on a total of nine points per chandelier. These are driven into numerous different positions by Liftket motors fitted with Kinesys Elevation 1+ drive units – giving 27 axis of automation in total.

The chandeliers are made from custom HUD style trussing manufactured by Thomas, which allows all the attached lighting fixtures to be stored, transported and cabled inside the trussing – saving considerable time on get-ins and de-rigs.

On the downstage face of each chandelier truss are flexible LED strips secured behind a plastic fascia creating the ‘crystal’ effect of a large chandelier. The neat cable management for each semi-circle is fed via the downstage pickup point of the trussing pieces.

The 27 x 1 tonne Liftket motors with their Elevation 1+ drives are all rigged in three cross and T-shaped mother grids which are flown above the stage - raised and lowered by Kinesys DigiHoist controllers. 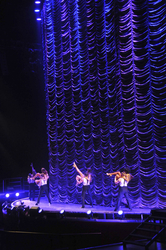 They also live in this mother grid for travelling between shows, which is another massive time-saving element of the technical design. The grid can be unloaded from the trucks, assembled and flown up to the correct working height position in a little over an hour reports Gareth Williams.

These 27 lighting points are all fitted with Kinesys Libra load monitoring cells, which are connected to each Elevation 1+ drive, continuously scrutinizing the dynamic weight loadings and supplying a real-time onscreen readout for Gareth via the Vector console.

Four further Kinesys points are used by the set department to move a massive Austrian drape system up and down. This comes in when Robbie Williams is performing on the forestage and the passerelle walkway out in the audience.

The drape mechanism is attached to a large semi-circular truss that is wider than the stage and is divided into three sections, each with a motor, gearbox and the Austrian drape lifting parts. The shafts that lower and raise the drape sections are driven by Kinesys Evo drives which give the positional accuracy needed to create the different drape looks.

Just upstage of this, on another semi-circular truss that is part of the same mechanism, is another drape system – this time it is a classic red music hall style cloth which is lowered and raised for one specific gag. Another Kinesys Evo drive is mounted on the truss connected to a continuous shaft which controls the drape movement.

All the draping elements have been custom designed and built by Hitchin based Brilliant Stages.

All 31 axis of control – the 27 chandelier Elevation 1+ motors and the four Evo Drives are all run from Gareth Williams’ Kinesys’ Vector control console, supplied by the tour’s lighting contractor Neg Earth, including a fully redundant backup system.

The Vector is integrated with the two Kinesys PDES (Power Distro E Stop) units which are dedicated to the 27 lighting points and the Evo DC8 control hubs running the four Evo racks via one of Kinesys’ new Mentor racks. 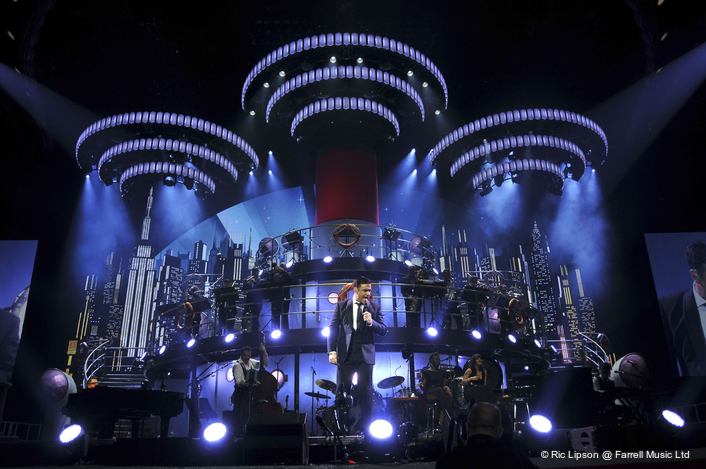 Gareth has been working with Kinesys products for around 8 years and is one of the UK’s most experienced operators with additional experience working on many other leading automation systems stretching back over 25 years. He comments, “The Kinesys package, and in particular Vector, offers one of the easiest, flexible and integrated stage automation solutions available. It allows programmers and operators to make things as complicated or simple as required and is an easy system to set up and work with”.

Gareth has around 30 automation cues in the show, which all add to the visual spectacle of another show-stopping Robbie Williams live experience.