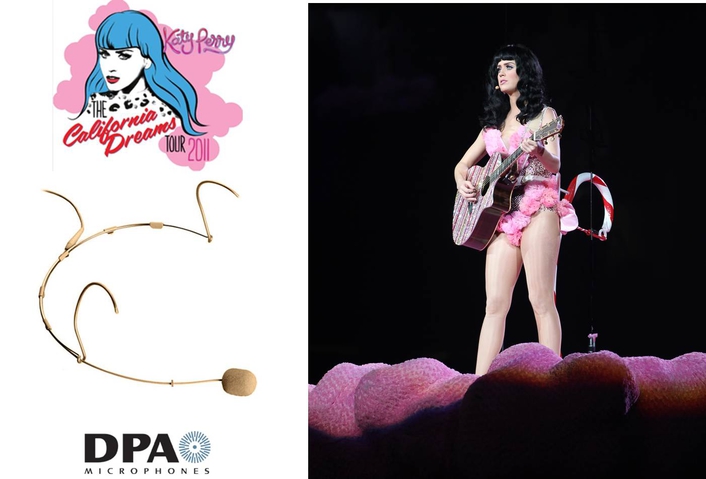 During Thinking of You, Perry stands atop a pink cloud that allows her to fly out over the audience playing an acoustic guitar
Katy Perry’s engineering team relies on DPA Microphones’ 4088 cardioid headsets for all the pop superstar’s live performances, including her current California Dreams world tour. With the fast-paced, high-action set mechanics of the tour, Perry’s front-of-house engineer Peter Keppler needed a mic that could adapt to any situation. The smooth design of the DPA 4088, which makes the mic almost invisible, combined with its ability to eliminate feedback and background noise, make it the ideal choice for a high-octane tour like Perry’s.

“When selecting a microphone, I wanted something that would provide a well-balanced, open and airy sound for Katy,” says Keppler. “She's a strong singer with a great voice and I thought finding a good headset mic would be a challenge. From the moment we tried the DPA 4088, I knew the sound was no longer going to be a problem.”

During Thinking of You, Perry stands atop a pink cloud that allows her to fly out over the audience playing an acoustic guitar. During this performance, Perry is in front of the main PA, which can be a potentially disastrous sonic scenario regarding feedback.

“The off axis rejection performance of the DPA 4088 was a lot better than anything else I'd ever heard,” Keppler explains. “All the headset mics I'd previously used sounded very unnatural — either muffled or very thin and boxy, and feedback problems were terrible. The DPA 4088 solved all of these issues. Her audience shows her a lot of appreciation, and they get especially loud when she flies over the crowd during Thinking of You, which also happens to be the quietest song in the show. The DPA 4088 has come through time and time again when I really needed to get Katy’s voice above the level of the audience. The gain before feedback is excellent.”The DPA 4088, which Perry uses exclusively as her headset vocal microphone, is especially useful during the song Hot N Cold, where she changes her outfit seven times. Since this would be impossible with a handheld, Keppler selected the DPA 4088 because it could withstand the abuse, while allowing Perry the freedom to move about the stage.

“For Katy, the requirements were that the mic sounded great and was as small, lightweight and inconspicuous as possible,” says Keppler. “We selected the beige-colored version so it’s even less noticeable when she wears it.”

Having worked as FOH engineer for Nine Inch Nails and David Bowie, Keppler knows what it takes to keep the audio running for a live tour. Night after night the 4088 has stood up to the rigors of the road, performing flawlessly.

“The 4088 has held up amazingly well,” concludes Keppler. “Sonically, it always delivers. The hardware and wiring are both surprisingly robust, especially considering the abuse they take on a nightly basis.”

The California Dreams tour continues through Europe into February.