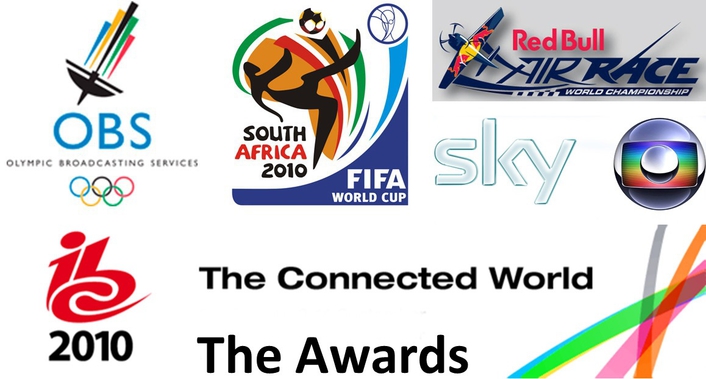 International Honour of Excellence - Innovation Awards - Judges' Price - Special Awards
The annual IBC Awards Ceremony celebrated just what can be achieved when creativity and technology come together. The awards covered the full gamut from “beautiful and elegant” engineering achievements to raising environmental awareness; from encouraging citizenship through access to parliamentary proceedings to bringing the world’s greatest sports events into our living rooms.

And as ever with IBC, all the attention was on the big screen, with plenty of thrilling footage, culminating in a sneak preview of the next big 3D blockbuster – Tron: Legacy from Walt Disney Pictures – three months before its release.

“IBC is a global event, and this year’s awards were a real reflection of that,” said Michael Crimp, IBC’s CEO. “There were nominations from around the world and around the industry, but most importantly they captured the spirit of co-operation and partnership which is at the heart of what we do.”

The Olympian of broadcasting 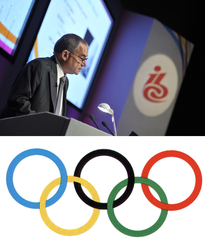 The 2010 IBC International Honour for Excellence went to Manolo Romero, the CEO of Olympic Broadcasting Services. He was a support engineer for Spanish national broadcaster TVE at the Mexico games in 1968 and has been involved in every single Olympics, summer and winter, since.

“I have been very fortunate to work in many sports events where we have been able to use state of the art technology and innovations,” he said. “With the help of many colleagues, we have made important strides in the development of television sports coverage.

“I am honoured to accept this award and dedicate it to all the friends and colleagues who contributed through the years, and to those who continue to strive for excellence in broadcasting in the future.”

Today he has overall responsibility for all host broadcast services, not just at the Olympics but at related events: he came to IBC direct from the inaugural World Youth Olympic Games in Singapore. A tribute tape played at the awards ceremony described him as “the Olympian of broadcasting”.

The IBC Innovation Awards are all about that co-operation and partnership. While to win one you need great technology, the award actually goes to the end user which has put the technology to good use. There are three categories: for the most innovative use of technology in content creation, content management and content delivery. 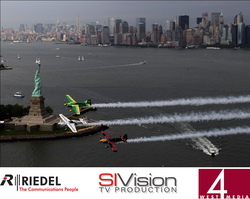 While there were impressive entries on stereoscopic sport at ESPN and managing audio loudness for the NBC Olympics coverage, the international judging panel gave the content creation award to Red Bull Air Race for its use of fibre for all content and communications. Riedel Communications led the technology, with support from SIVision Outside Broadcast and West4Media Production.

The finalists in the content management category were the multi-platform newsroom at Antena 3 in Spain and the plan to bring the 50 year video and audio archive of the European Parliament online. Because it harnessed remarkable technology – automatically ingesting from a huge number of formats – to a civic issue – giving the public access to their parliamentary debates – the judges handed the prize to the European Parliament audiovisual unit. Technology partners were Front Porch Digital and Broadcasting Center Europe.

Both finalists in content delivery were concerned with terrestrial transmission, but otherwise could not be more different. Highly commended was the rollout of DAB+ digital radio across Australia, by ABC and SBS, but the winner was the development of DVB-T2 to allow Freeview, the UK’s digital terrestrial platform, to offer HD in time for this year’s FIFA World Cup. BBC R&D led the project on behalf of DVB.

The Innovation Award scheme includes a fourth prize, in the gift of the judges. This year they chose to make an award to a project not from the category winners, but to celebrate a remarkable achievement which relied entirely upon close co-operation. 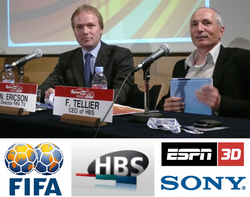 The FIFA World Cup is always a massive television event – 700 million people watched the final this year. With interest in stereoscopic 3D television rapidly rising, the decision was taken at the beginning of 2010 to cover a number of games live. Despite the many challenges and the very tight timescales, 25 matches were given the 3D treatment, including the final.

Meeting those challenges under the pressures already surrounding the broadcast operation was a remarkable achievement, and IBC marked it with the Judges’ Prize, given to FIFA, its broadcast partner HBS, the sports specialist channel ESPN and Sony which led the technical supply.

Niclas Ericson, director of television at FIFA, paid tribute to the co-operation between the members of the team: “thank you very much to all the people who were involved in this project, and we look forward to 2014 in Brazil and the next FIFA World Cup”.

Tim Scanlan of ESPN added “As you’ve heard from everyone up here it was a true collaborative effort. Thanks to the talented Peter Angell and his HBS staff, Sony and FIFA, ESPN was able to launch a new network and a new dimension.”

Pioneering work in stereoscopic 3D was also behind one of two IBC special awards this year. With the launch of Sky 3D earlier this year, the UK and Ireland satellite broadcaster BSkyB stimulated the creative sector as well as tackling technical issues to ensure that 3D content could pass through the existing infrastructure including set-top boxes.

The audience at the Awards Ceremony was treated to a showreel which highlighted the broad range and high quality of the programming on offer, including some stunning wildlife photography, before director of product development Brian Lenz came on stage to receive the award.

“It’s in Sky’s DNA to go out on the bleeding edge, pioneer and go somewhere new,” he said. “It’s really a privilege and an honour to say thank you to IBC for recognising the fantastic hard work that has been put in by literally hundreds of people at Sky to make this happen.” 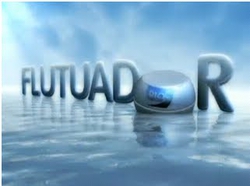 Campaigning journalism has an honourable television history, and TV Globo in Brazil has now combined it with technology. Concerned about the level of pollution in the river Tietê, it commissioned Flutuador – literally, “floating device” – to provide measurements and pictures, in order to raise awareness with the public and, ultimately, the politicians.

The data and cameras on board Flutuador resulted in more than 150 broadcast news stories and reinvigorated interest in the environment. IBC was proud to mark this remarkable initiative with a special award, and in response the representatives of TV Globo emphasised the importance of collaboration and innovation.

“I am delighted by the decision of the IBC directors and would like to thank our partners IPT and Policontrol, and of course my colleagues from the news group who endured hard times producing this work,” said Fernando Guieros from TV Globo. “I would also like to say that it is a privilege to work for a company like TV Globo that promotes innovation, supporting a small but very talented in-house R & D team.”

His colleague Raymundo Barros added “this project was only made possible due to the contribution of professionals coming from 14 different TV Globo departments who turned the term technical operations into a true co-operation. Thank you my friends: thank you very much indeed.”

The IBC2010 Conference Prize, for the best argued paper in the technical conference, went to an analysis of the way that screen size affects the viewer’s perception of depth in stereoscopic imagery. Does size matter? was written by Laurent Chauvier, Kevin Murray, Simon Parnall, Ray Taylor and James Walker of NDS.

Receiving the award on behalf of his colleagues, Dr Kevin Murray said “We are deeply honoured by and surprised at this recognition of our work in this new, fascinating and developing area. We hope that this work contributes to the growing body of knowledge on 3D for television.”

Underlining the importance of good design to creating a welcoming and informative exhibition, IBC presents awards for the stands which most impress the judges. 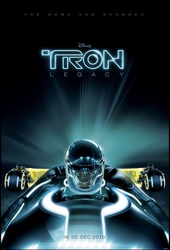 It is becoming a tradition that the IBC Awards Ceremony closes with an exclusive preview of a forthcoming blockbuster movie, helping put all the technology and co-operation into context with the finest content available.

This year the audience saw an extended sequence from Tron: Legacy, the long-awaited sequel to the 1980s sci-fi classic. Walt Disney Pictures will release it at the end of December, but IBC visitors got a sneak peek at the astounding mix of live and virtual reality action. It was a fitting end to a spectacular evening.

IBC is the premier annual event for professionals engaged in the creation, management and delivery of entertainment and news content worldwide. In 2009, the show attracted more than 45,000 attendees from 140 countries around the world, exhibiting more than 1,300 of the world's key technology suppliers and showcasing a debate-leading conference that, among other vital sessions, brought together the ASC and the BSC digital camera tests and offered pioneering insight into the latest developments in stereoscopic 3D.