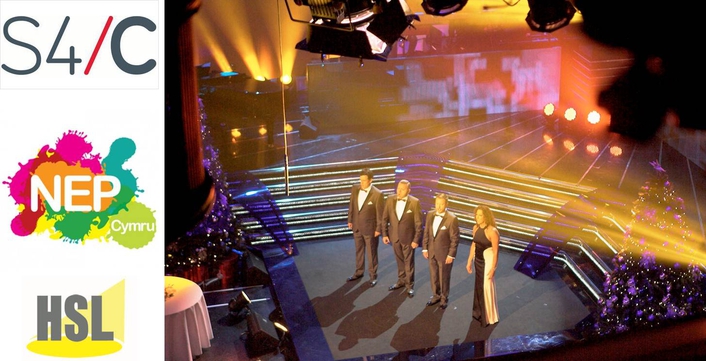 These were specified by Cardiff and London based Lighting Designer Steffan Jones, who designed lighting and video for the raft of programmes, many featuring live artists. He was working for production companies Boomerang PLC in association with Alfresco TV and Apollo TV, and co-producers Mr. Producer.

HSL’s TV and broadcast specialist Sean McGlone co-ordinated the project. He comments, “It’s always a pleasure working with Steff. His drive, enthusiasm, imagination and keen visual eye are refreshing and invigorating, and his designs always interesting”.

NEPC is the largest OB and studio facilities company in Wales, and the batch recording session included the creation of popular programmes like “Noson”, “Carolau Gobaith” and others.

Flexibility was the key to the lighting design, and so the rig was based on offering numerous options for Jones. He had to embrace and light a plethora of music and performance genres - from classical to pop, urban and rap - plus radically different daily set ups and formats across the 10 intensive days.

He also had to consider a heterogeneity of ideas from artists, managements, creative, choreographers as - well as his own – and incorporate all into a coherent look, feel and signature ambience for each of the specific shows being recorded.

This was all in a very short timescale, and often with limited rehearsals!

It was a question of thinking rapidly, often out-of-the-box and having real confidence in the design and set up for Jones and his programming team of Bill Peachment (moving lights and LED) and Chris Barroccu (generics), who both used Compulite Vector consoles.

While the overhead lighting rig had to be ultimately versatile, the floor elements were swapped daily, together with the LED screens to help keep the visuality for each show different and unique.

These were deployed in the air and on the floor.

Seventy-four Pulsar ChromaStrip 900s from HSL were ensconced into the set pieces designed by Phil Williams, which also changed every day, and the Lighting department also controlled LED strip-lighting on the set steps.

The video content was controlled and played back via a Hippotizer media server.

Sometimes gauzes were added to vary the look again, creating more layers and bringing a slightly different dimension to the studio floor.

Despite the gruelling work schedule and intense pressure with things often changing up-to-the-minute, everything went very smoothly for the recording sessions.

HSL has worked with and supported Jones since the start of his career. He comments, “HSL are always efficient and flexible whatever the circumstances. The equipment was in excellent condition as always, and I look forward to working with the company and people for years to come”.

Jones’ Gaffer was Noel ‘Roly’ Smith and the systems/LED tech was Chris Banks. The series director was Ronw Protheroe.

NEP Cymru HD1
The Olympic Torch on its ...ay to the Olympic Stadium
Lighting & Visual Diversity for HSL