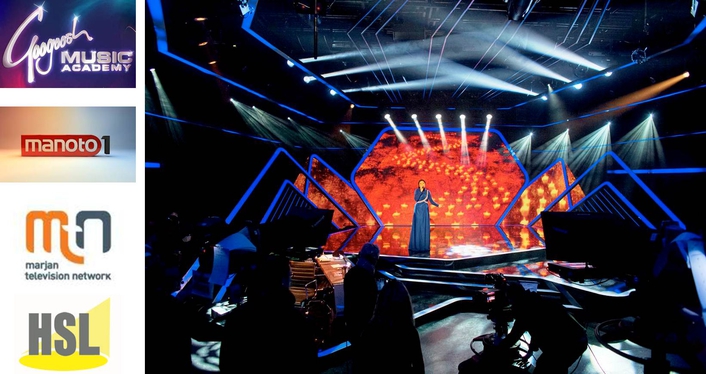 .
Leading UK lighting and visuals rental company HSL is supplying all lighting equipment to the current series of the Googoosh Music Academy, which features a spectacular lighting design by Steffan Jones.

The show, produced by Manoto TV is recorded in Capital Studios, Wandsworth, south London and broadcast on primetime via the Marjan Television Network. It is a massively popular voice competition - Up to 1.3 million public votes have been cast per show - inspired by Iranian pop superstar Googoosh, who is also one of the three judges. The judges act as mentors for the ten finalists appearing in the TV series, all aspiring Iranian singers selected from hundreds of hopefuls.

Simon Stuart and Sean McGlone are Project Managing for HSL. Simon comments, “We are really happy to be working with Steff again who is one of the rising young talents of our industry. His designs are always fresh and inventive”.

Jones’ brief for the lighting design was to make it vibrant, versatile, exciting and dramatically different to a conventional LE reality show and talent competition.

In addition to the contestant performances there is usually at least one guest artist appearance per show, so flexibility is a key to making each section of the show look unique and bringing a true ‘extravaganza’ feel to the space.

Other challenges included fitting a large amount of lights into a relatively compact studio space. 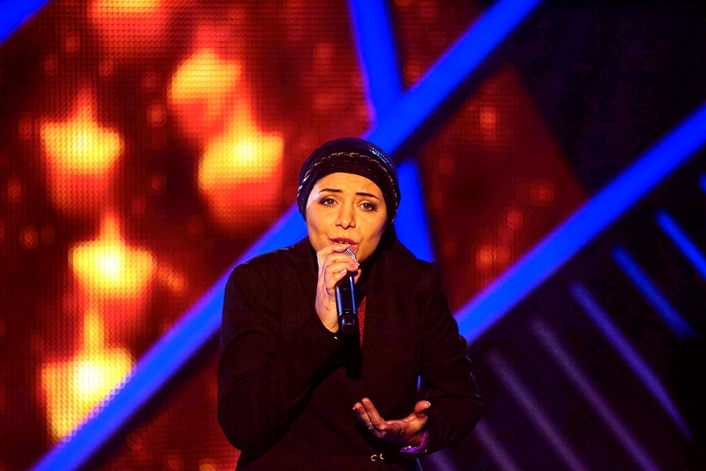 Jones worked closely with renowned set and scenic designer Florian Wieder in developing the overall aesthetics, which are heavily video based.

Each week, he also collaborates with the Potion Pictures team who create the graphics, and Creative Director Andrew Keep, who comes up with specific requirements and requests. Jones and his programmers then create the looks and scenes in line with the brief and graphics for that week.

Most of the key lighting is done with ten Vari*Lite VL1000s. There are also around 30 ETC Source Fours fitted with ¼ CTB to balance with the set LED screens, and these are used to light the judges, key areas of the set and for back lighting.

Each judge also has a Kino Miniflow with 0.3ND positioned on their desk, to light under their chins and eliminate shadows.

The effects rig comprises 14 x Robe ROBIN 300 Beams, five Robe ColorBeam 700E ATs and 25 x Martin MAC 700 Spots, all above the stage and on the floor.

Behind the rear video screen – which splits apart – are 27 Sunstrips and two MAC 700 Profiles, used for high impact stage entrances.

Other lights include a selection of ARRI Pups on stands used from mobile audience and backstage shots, three 5K fresnels for cross lighting during the larger ‘production numbers’ and two of HSL’s Robert Juliat Alex followspots mounted on truss chairs at the back of the audience seating.

For atmospherics, there are three K1 hazers.

HSL pulled all the stops out to get the equipment prepped and turned around in a 48 hour period once confirmed for the project!

Jones comments, “Thanks to Simon and Sean who were contactable 24/7 as usual in the run up which is great, and their attention to detail to every aspect of the project - despite the short timeframe - was fantastic! Additionally I had that amazing HSL service from several other individuals including Mike Oates, Lee Farrell and Ryan Hopkins – all-in-all it was superlative teamwork!”