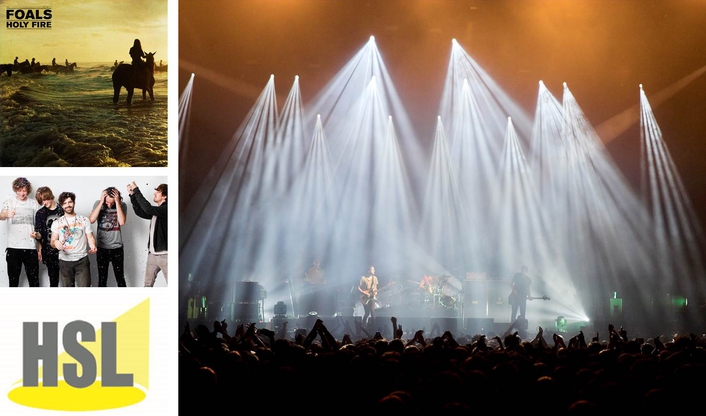 This was Sherwin’s second world tour for the band who have earned much critical acclaim for their incendiary live performances  and  won the 2013 Q Award for Best Live Act. Lighting was an integral part of the show and lead singer Yannis Philippakis in particular had some very clear ideas about how certain things should look.

The look and feel of the UK tour, which culminated in two sold out nights at London's Alexandra Palace, was an evolution of their summer Festival floor lighting package which was highly effective and presented with Sherwin's characteristic imagination, style and flair. 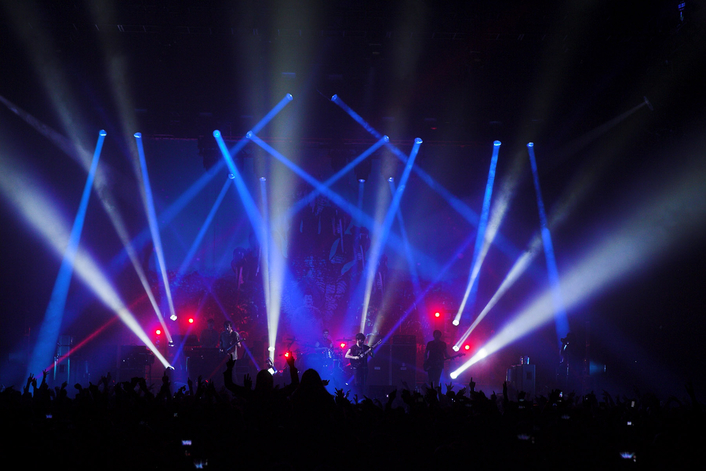 HSL's project manager Mike Oates commented, "Davy always comes up with something original and different, and this was no exception. With no video, all the visual dynamics were provided by the lighting and lasers”.

Sherwin and Laser Operator Michael O’Driscoll worked closely and very furtively to craft the show’s visuality , and ensure that  every song was different and clearly defined.

The starting point for the design was the entwined cobra / Buddha backdrop created by Leif Podhaksky who also does all the album artwork. The band thought this would work well as a signature look for the tour, and the distinctive shape and form of the Buddha defined the size and location of four onstage trussing towers and the positioning of all the floor lights, all of which followed the contours of the image.

The four towers were constructed from HSL's Low-Pro pre-rigged trussing. For convenience and practicality, the fixtures travelled in the trussing and once de-rigged from the stage, the sections were all loaded into dollies and wheeled into the truck, greatly adding to the speed of the in / out.

The intricate backdrop was illumined with six Chroma-Q Color Force 72 LED battens shooting up the cloth. 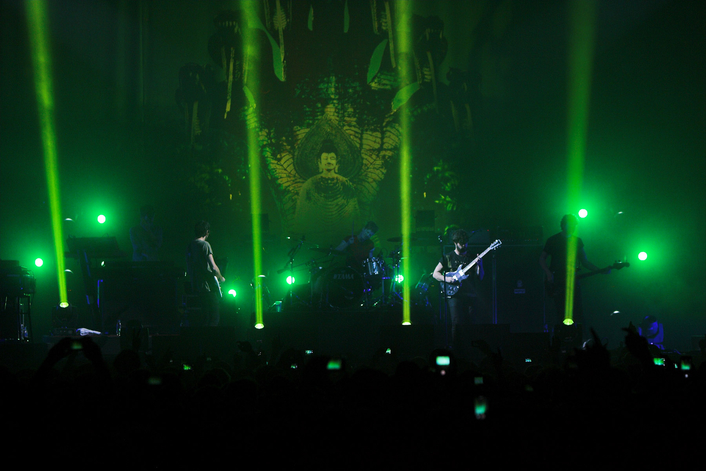 On the floor in the gaps between the towers were four Martin MAC Viper Profiles, with another two Vipers slightly offstage, fitted with Quadray lenses offstage and used for a specific and highly effective moonflower type effect during "Spanish Sahara". This was a request from the band, who'd seen the fixtures in action on a festival last year and asked Sherwin if he could do something similar for this song.

Four CP Sharpies sat mid stage on the risers and along the downstage edge of the stage were another six Sharpies for those punchy spikey looks – but with a twist as most of the time they shot vertically up in the air rather than doing the classic crossing Sharpie beams … which made a nice change! 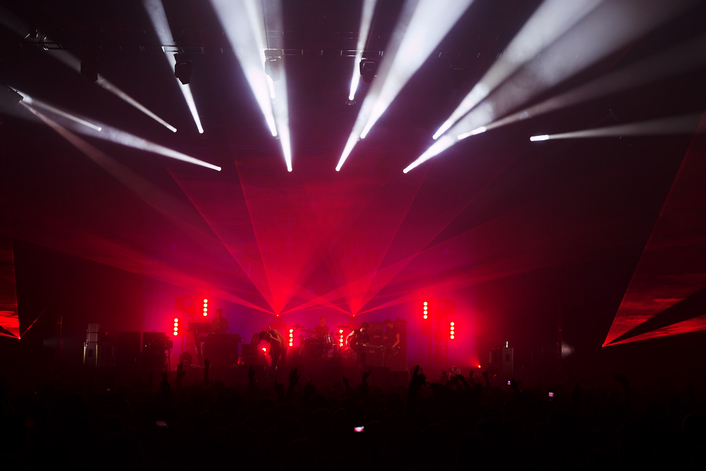 The floor lighting was completed with four MAC Auras downstage at the sides for low level cross lighting sweeping across the band.

Overhead, there were five 3 metre Trussing pods - also Low-Pro - flown in back, mid and front positions with gaps in between. Rigged in each of these were two MAC Vipers, two MAC 3Ks with Air-FX kits, two Atomic Colours and two red ER Laser Array battens.

General stage washing was delivered from six MAC 2K XB washes on the front truss and nine 4-lite blinders blasted out into the audience from the downstage rail of the truss. There was plenty of audience interaction during the Foals very dynamic set and Sherwin ensured that the energy levels coming offstage resonated right out into the audience and to the back of the hall.

ER also supplied four RGB 8 Watt lasers which were tastefully integrated into the visual mix via the great rapport that developed between Sherwin and O'Driscoll when operating the show.

Maintaining  a well-defined aesthetic for the show, Sherwin gave it a linear structure with a majority of the looks clean and pointing either straight up to directly down, a structural feel with lots of big dramatic vertical beam shifts, and the lasers followed the same template. The maelstrom of high energy strobing, drama and chaos laced with absolutely magical moments of calm and suspense. 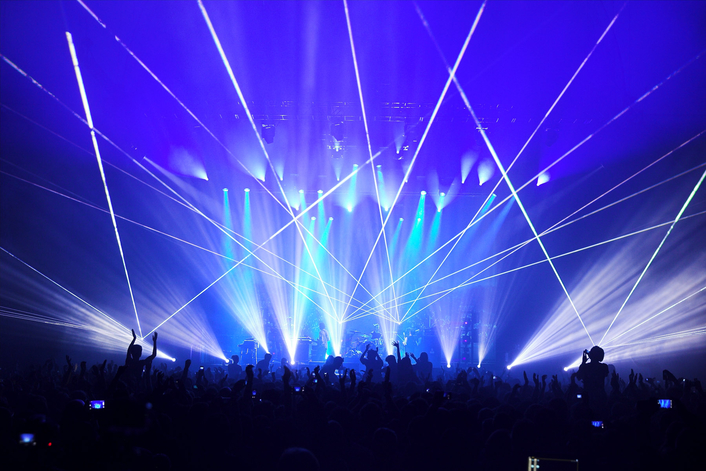 HSL's crew on the tour were Chris Roper and Russell Cobden, and they were joined by Jon Trincas for the Ali Pali shows.
Sherwin says, "HSL are my favorite UK rental company! The service was fantastic, the crew were brilliant and the gear was immaculately maintained and prepped, and of course, Mike makes sure that we want for nothing and that everything always runs like clockwork!"