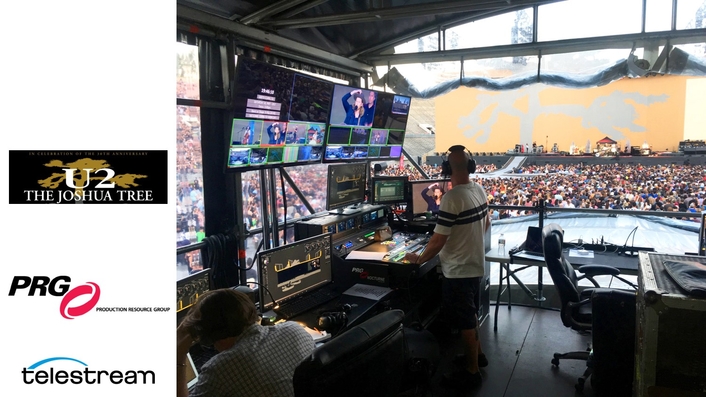 Los Angeles-based PRG (Production Resource Group), a leading entertainment and event production company, has been involved with staging dazzling concerts for some of the world’s best-known artists including U2, Paul McCartney, Metallica, Beyoncé, and Roger Waters for over two decades. As part of its services, PRG also produces video elements for live shows, including video walls and big-screen projection. To help support this service, PRG recently acquired three Lightspeed Live systems from Telestream.

For U2’s 2017 Joshua Tree world-spanning tour, the band’s management team wanted to capture and archive all the live 4K and HD footage from each of the fifty-two concerts for future use and access.

Typically, capturing and archiving nearly 27 hours of high-resolution video footage every night would involve capturing the cameras to multiple recorders then tasking a staff or crew member with the time-consuming job of consolidating all the files and transferring the data to multiple hard drives after show—a process that could take hours.

Using Telestream’s powerful new capture and ingest solution Lightspeed Live, PRG offered an innovative alternative to the management team—to do it all at once in less time and with less manpower.

Deployed as a fly-pack set-up near the stage, the configuration included two Lightspeed Live systems used to ingest the 1080/60p broadcast-quality signals from eight cameras, with a third used to ingest a 4K/UHD program line feed coming from the production switcher. These video sources included multiple 1080/60p HD cameras covering the show from all angles, as well as the 4K/UHD resolution program line feed being output by the production company’s switcher.

Lightspeed Live also enabled that footage to be simultaneously copied into the Apple ProRes files needed for editing onto an external disk array all in a single, time-efficient workflow.

“Lightspeed Live enabled the production company to reduce its crew size and other operational expenses while accelerating delivery of the concert footage for edit and archive. When on the road for months at a time, these cost savings really add up,” said Wolfgang Schram, Director of Video Engineering at PRG. 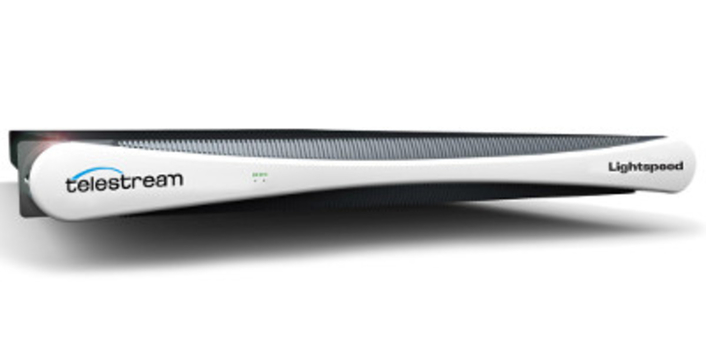 Another reason simultaneous capture and copying was critical was that the production crew would only have ten minutes following the end of the show—when all generator power trucks would be powered down—to put the ProRes media drives into the hands of the editor working for the band’s production management company.

The on-duty operators were also able to open and play back the growing ProRes copies the moment they began recording. This capability let them see, evaluate and scrub the video while it recorded from start to finish, rather than waiting until the recording was complete.

If the production team noticed a recording problem early on, they could make changes and adjustments right then, without waiting until the end of the show when it would be too late to fix. And with an editing system, like Premiere, they could also start editing the files right away. The ability to view and edit growing files was a huge benefit.

“Lightspeed Live’s unique ability to simultaneously record mezzanine video onto local storage and an external storage system in a variety of formats was the key functionality we needed. Being able to control and manage multiple capture channels from a single web page, and inspect, open or edit growing files as they captured were all great bonuses for us,” added Schram.

In addition to the workflow considerations and extensive format choices, PRG also chose Lightspeed Live for its ability to expand into a streaming encoder should any of its future customers want to distribute their events via an OTT platform. With rack space, power and AC considerations, PRG will be able to tailor the gear and associated wiring to meet the needs of any future project.

“The Lightspeed Live units have a compact footprint that doesn’t consume much rack space or power—that’s a big deal on the road. That and their ability to concurrently capture and copy our masters streamlined our overall live-to-edit workflow, accelerating the process by 3-4 hours per concert. Without Lightspeed Live, we would not have been able to securely capture and deliver multiple hours of hi-res concert footage on such a tight turnaround, show after show,” concluded Schram.

Telestream provides world-class live and on-demand digital video tools, workflow solutions and quality monitoring capabilities that allow consumers and businesses to transform video on the desktop and across the enterprise. Many of the world’s most demanding media and entertainment companies, and service providers, as well as a growing number of users in a broad range of business environments, rely on Telestream products to streamline operations, reach broader audiences, generate more revenue from and ensure the quality of their media. Telestream products span the entire digital media lifecycle, including video capture and ingest; live and on-demand encoding and transcoding; captioning; playback and inspection, delivery, and live streaming; automation and orchestration; with its iQ product line, Telestream enables the monitoring and management of quality service and experience over any network.