The Holiday Season for EMF 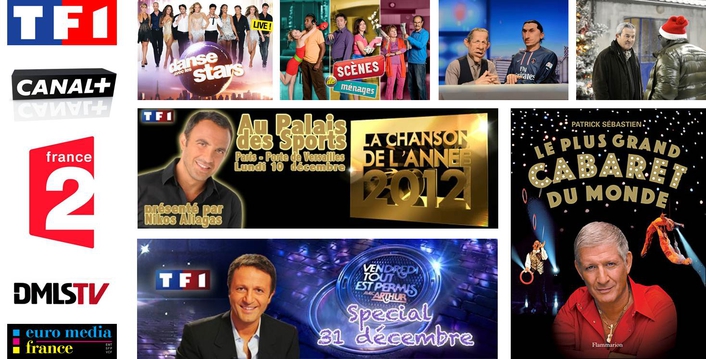 .
Euro Media France was taking part in several special programmes in December and over the Christmas and New Year period.

Christmas:
• TF1 was offering a special Christmas show of Danse avec les stars [Dancing with the stars] on the 22nd December at 8.50pm. Filmed on set 217, several celebrities from the three different series have accepted to come back, for one evening only, to perform once again.
• Don’t forget the ‘best-bits’ show for l’Année des Guignols filmed from set and control room 104. Broadcast on 25th December at 8.55pm on Canal+, the programme has broadcasted re-live in a funny way some of the highlights from 2012.
• Nos chers voisins fêtent noël – [Our dear neighbours celebrate Christmas] Aubes and Ango Productions installed on sets 1 and 3 at the Transpasets studios in Saint-Ouen, were serving up a dinner for some original neighbours on 28th December at 10.40pm on TF1.
• Filmed in the Palais des Sports with OB truck XL4, the show La chanson de l’année [The song of the year] was produced by DMLS TV. TF1 will present a spectacular musical evening on 29th December at 8.50pm in the company of French and International artists who have been popular throughout the year.

And for the New Year:
• On TF1, Arthur will put on a big spread on set 128 for a New Year’s eve special of le 31 tout est permis [Anything goes on the 31st]–AWPG.
• Le plus grand Cabaret du monde [The biggest cabaret of the world]– Magic TV – filmed on set B1 at the Bry studios invites you to celebrate on the 31st December at 8.35pm on France 2 with a show devoted to entertainment, magic and comedy.
• Scène de Ménage – [Domestic scenes]-Kabo Productions – installed on set L5 at the Lendit Studios is also donning its festive dress for a special show, with several guests on the 31st December at 8.50pm on M6.

Incredible Talent: on Stage and Backstage

Euro Media France provided the technical means for the show La France a un Incroyable Talent [France has got talent] broadcast on M6.
Fremantle, which produces the show, renewed its trust in us to provide the technical services for this seventh season.
EMF has also filmed several other programmes from Fremantle: Questions pour un champion, La famille en Or, Mot de Passe, A la recherche du nouveau Michael Jackson et Claude François, for example.
After 6 audition episodes, and 4 shows for the semi-finals, live from set Carrere B, the final for the talent show will be broadcast on Wednesday 26th December.

Set up in OB truck XXL2, director Franck Broqua will rely on the 13 cameras provided by the Euro Media France teams.
- 1 camera with a robotic head –remote controlled- from Novagrip located in front of the stage.
- 2 studio cameras facing the stage (including one Loupe, new for this year)
- 2 light cameras  (mounted on tripods stage right and stage left in the audience seating area)
- 2 Portables  (stage right and left forestage)
- 1 light camera with a wide shot for the judges
- 1 studio camera for the close-ups of the judges (placed at the back of the stage)
- 1 zenithal remote controlled camera (Novagrip)
- 1 Beauty camera, mounted at the top of the tiered seating for the wide shots of the stage
- 1 camera on a 12m telescopic crane rented from Transpagrip
- 1 steadicam for the fluidity of movement and proximity to the contestants.

For the Beauty of Images and Images of Beauty

After the success of the Danse avec les Stars [Dancing with the Stars], this weekend, Euro Media France remained in control of the technical equipment on TF1 Saturday night prime time with the election of Miss France 2013.
The live broadcasting of the election for the most beautiful woman in France has become a tradition for EMF, which supplies its know-how and technical equipment every year in December for this beauty contest produced by Endemol.

OB truck XXL3 was installed in the Zénith in Limoges to film this evening full of surprises (in particular, Gad Elmaleh and Jamel Debbouze were invited on stage). Franck Broqua was at the controls of the 13 cameras (including three “juniors”, one telescopic crane installed to the left of the stage, and one litecam at the top of the tiered seating), and filmed to perfection the 3 hour show presented by Jean-Pierre Foucault.
8.1 million viewers saw Miss Bourgogne being chosen and viewing figures reached nearly 9.6 million by the end of the show for the coronation of Marine Lorphelin. These are record figures not seen since 2008 with 39% of the audience share; proof that viewers were seduced by the programme!

After the Guignols control room’s transition to HD this summer, EMF tackled the upgrade for the Boulogne control room.
The programmes from Flab Production started their season in HD with an OB truck, but the permanent control room is now operational. Along with the Kahuna mixer, all of the equipment (decks and Evertz modular components) and the monitoring were replaced so as to offer a full HD workflow. 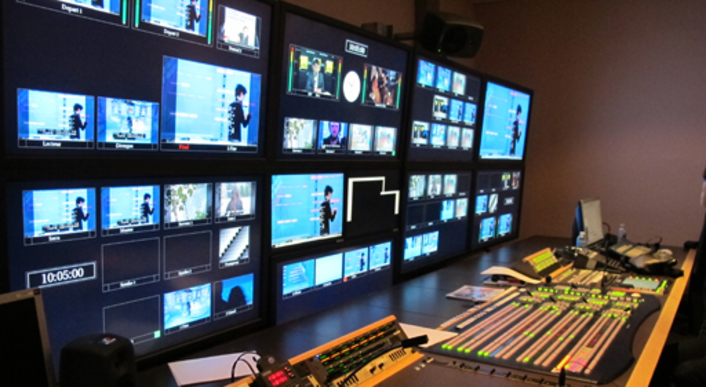 The two subscriber only shows for this control room, La Nouvelle Edition and Canal Football Club, will also benefit from the first LDX cameras from Grass Valley.
EMF is the first service provider in Europe to benefit from these new cameras and has already invested in fifteen of them.

Euro Media France worked with the NRJ group for the creation of Chérie 25.
Amongst the 6 new channels on TNT that came into existence on 12th December last year, the channel Chérie 25 has benefitted from the technical engineering and integration advice from Euro Media France.

A specialised team worked for several months on the redesign of the broadcasting control room for the NRJ Group.
Euro Media France put into place complex technical equipment for the configuration and use of the equipment for the 5th television channel for the group.
Available in approximately one out of every two households- via TNT, cable networks, satellite and broadband connections, “the channel that has everything for her” is targeted at women (aged between 25 and 55).

At the time there were no cameras, let alone 3-D! Yet, Euro Media France did it with the 3-D film 1789, les Amants de la Bastille [1789, the Lovers of the Bastille]!
OB truck XL1 was installed backstage at the Palais des Sports in Paris for Keystone.
After the world premiere that was the audiovisual filming of Mozart l’opéra rock [Mozart, the rock opera] in December 2010, Euro Media France is in action again with the 3-D filming of the show produced by Dove Attia and Albert Cohen.

Euro Media France helped the South Korean team composed of 70 technicians with the installation of 8 rigs, 1 rig more than was used in the filming of Mozart l’opéra rock.
EMF also provided all the necessary material for the “stereographer” area, located in the corridor of the Palais des Sports.
With stage direction and choreography by Giuliano Peparini, the show takes the viewer on a journey from all of Asia to the best period of the French Revolution, between the spring of 1789 and the 26th August 1789, the date of the Universal Declaration of Human Rights.