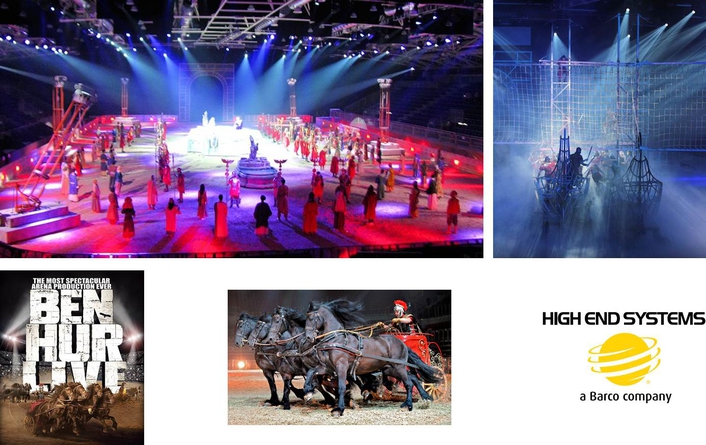 Live chariot races are just one part of the monutainment - with 100 performers and 100 animals, specially trained horses, and special effects with fire, water and wind.  Among the many on the design team are Mark Fisher, who designed the stage, scenery and props, and LD Patrick Woodroffe, who designed the lighting.

Reinbacher said, “The intellaspot was chosen for its intensity, color mixing system and projection quality; the 850W fixture’s output was compared to that for 1500W fixtures.”

There’s more of a story to how the Road Hog Full Boar was chosen. The original show, which premiered in 2009 and toured in a few European cities, was programmed on a different console.

Andy Kisters is lighting director and show operator on this Ben Hur Live and worked together with Eneas MacKintosh, lighting designer and assistant of Mister Patrick Woodroffe.

Kisters, who had been working years since with a Wholehog console without any problems, decided to try the 2011 touring show on the Road Hog Full Boar. Woodroffe agreed as long as he had a full tracking backup system for the show.

Kisters and Manfred Nikitser reprogrammed the show on the Full Boar in the WYSIWYG Studio at Preworks.

Kisters was happy with the speed and efficiency of the console. “The new Wholehog software (v3.2.1) runs absolutely flawlessly and I am satisfied, as I have always been a Wholehog user.  The programming process runs much faster now. There are a lot of effects in the show, and it is so easy and fast to create an effect using the Effects Engine.”

The Mark function is another useful feature of the Wholehog OS, he said. “More than 70 percent of the cues are marked in the show. I like how simple it is to use macros. I use them a lot. I operate the show as simply as possible with macros triggering cues elsewhere on the desk,” Kisters said. “I had the ability to reduce the total cue count by almost 100 cues by simply using the mark function.”

The Full Boar has been running flawlessly for shows five days a week and double shows on Saturdays, Kisters said. “As long the Wholehog OS software remains on this high level, I never would change to another desk,” he noted.

“I am happy to work together with Media Resource Group on this big project,” Reinbacher said.

Since 1995, MRG has supplied creative and technical services, along with event technology and booth construction, for national and international customers. Its headquarters are in Crailsheim, Germany, with additional production offices in Berlin, Duesseldorf, Hamburg, Munich and Trier. Their core business of lighting, sound, video, staging, special effects and booth construction requires “360-degree Performance,” a motto the staff uses every day to service and manage their productions.

MRG was involved in the original Ben Hur Live in September 2009, which was one of the biggest arena productions ever produced in Germany. It celebrated its premiere in the sold-out O2 arena in London. The success of this production led to the concept of the tour.

Ben Hur Live, organized by the company New Arts Concerts, plays until Dec. 4 in Rome. It then moves Dec. 9 to Cologne, Germany. Other producers have visited the show in Rome and expressed interest in bringing the production to the U.S., Asia and other countries.