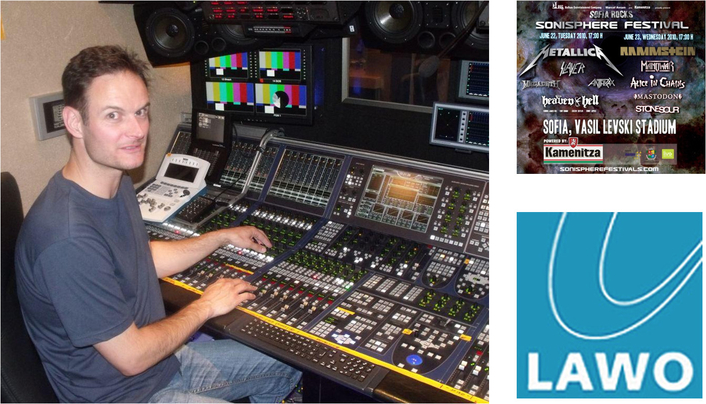 Cinevideogroup’s German sister company Nobeo supplied their NOBEO1 OB truck for British sound engineer Tim Summerhayes (of Red-TX) to mix the show live to 5.1 on the Lawo mc²66 console and a separate 5.1 mixroom was created, where Huub Lelieveld mixed EVS outputs into the show for a programme including backstage interviews for the cinema visitors worldwide.

Summerhayes did a couple of days pre-production work in Cologne with Nobeo’s Remco Deckers; they built the system together preparing EQs, gates and FX and creating start points for everything which saved time on show day.

“The mc²66 is extremely quick and easy to work with,” says Deckers. “We even connect intercom panels; you can patch them over the desk and route everything. It’s completely interchangeable with VSM (Virtual Studio Management) and totally flexible running video and audio together; that’s the great thing about Lawo.”

Three Lawo stageboxes on fibre were used to get the mic splits from three different PA systems and Lawo snapshots were used to route the relevant mic inputs to the mix channels, where Summerhayes was at the helm.

“It’s great that the Lawo’s got 48 channels on top because on this particular production we’ve got inputs from all the bands on one layer,” explains Summerhayes. “This makes it easier to operate and means we can use the lower layers for system control, FX sends, returns and audience reaction.”

The mc²66 console utilised 270 channels in total which constituted the main frame communications box, all inputs and outputs, auxiliaries, FX, EQs, dynamics and a vast amount of MADI streams.

“Sonically it’s a beautiful desk,” added Summerhayes. “I really like the EQ and the dynamics because they’re very smooth; the console has also got the soft knee compressors which I’m a real fan of. Even though I have only used the mc²66 three or four times before, I don’t find the board limiting at all.”

The concert was successfully broadcast live to 800 cinemas spanning the USA, South Africa, South America and all over Europe; the largest cinema audience was in Mexico City where an astonishing 6,000 people enjoyed the show. A DVD and Blu-ray will follow shortly.

Lawo, headquartered in Rastatt/Germany, specialises in developing, designing and manufacturing mixing consoles and matrix systems for radio and TV broadcasters, as well as for use in live events. Standards of high quality and innovative technology are supported by decades of experience in the field of professional audio technology. In 2010, the company celebrates its 40th anniversary.

Lawo’s product range covers digital audio mixing consoles for use in radio, broadcast, production and live applications, including the required software. In addition to the provision of matrix systems and audio networks, Lawo also carries out project engineering tasks and acts as a main contractor for radio OB trucks; these services include user training and maintenance. This high level of expertise results in a comprehensive support service for Lawo customers.