Audio Support from Flying Carpet Productions & SOUND.COM
The Coke Studio at MTV India is a premier platform for showcasing a fusion of India’s best musical talent. Now in its third season, the popular television broadcast events bring together the country’s top independent, classical, folk and popular artists and their creative energies into one entertaining series. Sponsored by the Coca-Cola Company, the show invites musicians from different genres to jam together while recording the resulting collaboration on the spot.

The series has gained massive popularity with more than 40 million viewers in the second season alone. This year, the season has pushed the envelope by providing leading-edge music that features world-renowned composer AR Rahman with top artists like Sivamani, Amit Trivedi, Clinton Cerejo and others for listeners across the globe.  The iconic AR Rahman is a global endorsee for HARMAN’s JBL brand, and Sivamani is an AKG endorsee.

The show is being supported by India’s leading audio & music production company Flying Carpet Productions (FCP), the sonic architects and turnkey audio solutions provider. Led by Audio Director, Ashish Manchanda, the company has supported broadcast music formats like Coke Studio, MTV Unplugged and has mixed for movie soundtracks like Bhaag Milkha Bhaag and Dev D. In turn, the company collaborates with leading sound reinforcement provider SOUND.COM for The Coke Studio’s artist and production monitoring requirements at the shoot and during rehearsals. The MTV series also features Grammy™ Award winning engineer Stephen Fitzmaurice, who is leveraging his expertise from having worked with renowned artists like Seal and U2.

Commenting on the successful opening of Season 3 of Coke Studio at MTV, Ashish Manchanda, Audio Director & Engineer, FCP said, “With over 200 musicians and over 45 original songs, Season 3 of Coke Studio at MTV presents a plethora of musical flavors, enthralling audiences with unique combinations of music genres and versatile musicians. Thanks to the premium range of microphones & headphones by AKG and Soundcraft mixing consoles, we are able to capture life- like performances of the wonderful artists featured on the show- be it vocals or instruments. Considering the live nature of the program and the expectation for audio clarity, we are very pleased to collaborate with SOUND.COM. Their HARMAN Professional equipment deployed at the show has delivered flawless sound output, receiving very encouraging comments from the musicians and composers.” 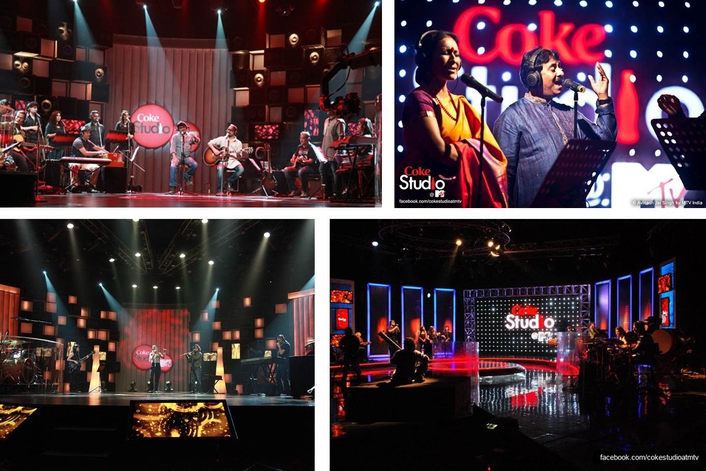 SOUND.COM, with a track record of handling audio for some of the most illustrious live events in India, has provided the entire range of audio equipment and the backend support for the stage equipment setup along with RF technicians.  For the demanding project, Ashish Manchanda along with Warren D’souza, Managing Director of SOUND.COM, decided upon the Soundcraft Vi 6 console for use at the audio mixing position along with a Soundcraft Vi1 as a sub-mixer for larger acts. JBL LSR 4328’s are in use for monitoring during recording.  “Coke Studio at MTV is a testimonial to our company’s commitment to cult musical shows on television and the internet,” confirmed D’Souza. “We have the experience and equipment for the artists and producers to deliver successful productions that are enjoyed by the viewers. Our synergy with Flying Carpet Productions is a testimonial to our work on MTV Unplugged & Coke Studio and we will continue to deliver our best by exploiting technology to the limit.”

“The Vi6 console has a remarkably intuitive Vistonics interface which made it easy to handle almost 60 inputs on each episode of the show with relative ease,” noted Mark Thomas, Systems Engineer for the project. “We chose to work on the Soundcraft Vi6 this year due to its ViSi iPad app. During the recording sessions each musician in the house band was given control over his/her mix using the ViSi remote app on an iPad. This enabled them to tweak their mixes for every song, based on their individual requirements, while the engineer concentrated on handling the in-ear monitor mixes for the guest musicians and singers. The musicians were ecstatic about being able to control their own personal mixes with no learning curve. We used up to 12 iPads simultaneously on the Salim- Sulaiman episode, without a single re-sync issue or network glitch.”

“As far as monitoring is concerned for the series, the amount of inputs we had to cater to was challenging. The Soundcraft Vi6 definitely made life simple in terms of monitoring, having the flexibility to make all of the busses into auxiliaries as per the requirement of individual producers,” added Ezekiel Tyle, Monitoring Engineer for the show. It was an absolute pleasure to work on this board.” 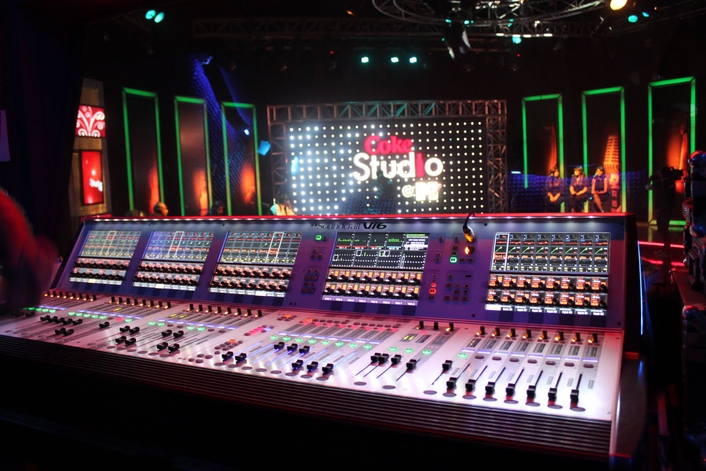 For microphone technology, the show is outfitted with an assortment of AKG models including AKG DSR 700 V2 wireless systems, D7 and D5 microphones for back-up vocals. Other microphones such as C414’s for drum overheads and piano, and C451’s for cymbals and guitars have been deployed at the show. Both mics have been favorites on this show, with the C451 being the permanent microphone on the hi-hats due of its excellent HF reproduction. C414’s are used on everything from Percussion/Drum overheads to shakers and piano, whereas the AKG D 112 was chosen for its excellent fit with the low end of the Cajon, the kick, and the duff. For consistency, all artists on the show are using the AKG K171 MK II headphones.

“This association exemplifies HARMAN’s commitment to quality and our ability to deliver on any stage,” said Prashant Govindan, Director – India Operations, Harman Professional. “HARMAN’s AKG, Soundcraft and JBL products combined with the experienced professionals from Flying Carpet Productions & SOUND.COM, provided perfect and reliable sound for yet another successful edition of Coke Studio at MTV India.”