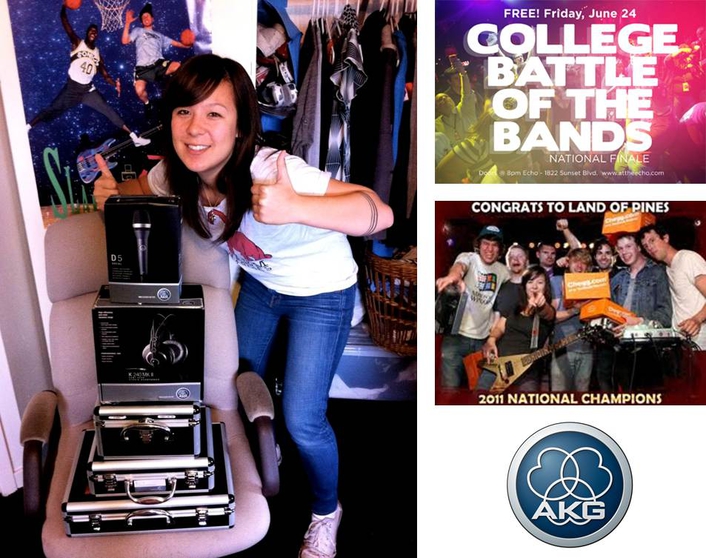 The College Battle of the Bands team, with partners like AKG and GRAMMY U genuinely care about working with student musicians
When it comes to ahead-of-the-pack indie rock, Seattle is a hotbed of talent with no signs of cooling off. Land of Pines is one of the latest up-and-coming bands to emerge from the Pacific Northwest, with an open, inviting sound that blends acoustic and electric guitars, keyboards and harmony vocals. As the winner of the national College Battle of the Bands competition, Land of Pines has received a variety of prizes including a set of HARMAN’s AKG microphones and headphones, helping spur them on to greater musical heights

The contest itself was an invaluable experience in shaping the bands’ musical careers, according to Land of Pines’ guitarist and vocalist Kessiah Gordon. “Before College Battle of the Bands, the only AKG gear I owned was a pair of 240 headphones. They went through a lot – and even kept working after I accidentally rested them on a lamp and the plastic melted in the shape of a light bulb,” she continued.  “But as an engineering student, I’ve had the pleasure of using some great equipment and the AKG 414 was one of my favorite microphones. The proximity effect of the 414 along with its sparkly high end really complemented my vocals.” 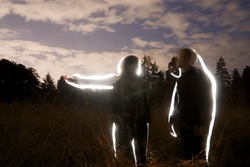 “The College Battle of the Bands team, with partners like AKG and GRAMMY U genuinely care about working with student musicians.” Gordon stated.  “We’ve already used most of the gear in the prize package, and we’re thrilled about the C214 condenser mic and MkII headphones.  We engineer our own records, so owning top-quality gear amplifies the whole experience. I truly appreciate the improvement in equipment quality we’ve earned. Hearing yourself at your best inspires you to create at your best.”

Land of Pines started out as a high school senior project between lifelong friends Gordon and Evan Easthope. “We didn’t really expect it to become anything after graduation since it served primarily as an academic achievement,” said Gordon. “We were then accepted into universities on opposite sides of the country, so it was a pretty sad affair when we went our separate ways in the summer of 2008. Ironically, the distance was a huge source of inspiration, and we began writing a lot more and exchanging demos. I was also learning about music production at school, which enabled me to start recording our songs.”

Following their freshman year of college - the summer of 2009 - the two band mates were hired as camp counselors together and continued to work on their sound.  “We spent our free time tracking the basics of what would become Land of Pines’ first three EPs, using minimal instrumentation, a laptop, a few basic microphones and a pair of AKG 240 headphones for monitoring.”

The duo began playing their tracks to friends, family and supporters with great response. After their Sophomore year, Gordon and Easthope decided to take the following year off from college to create a live band, adding Kyle Holland on drums, Spencer Miller on bass and Alex Miller on keyboards. Today, Land Of Pines is working on its fourth and final installment of an EP series, set for release late 2011.

Land of Pines has a strong second half of 2011 planned. The members will be going back to school, playing shows to improve their sound, including a scheduled spot on College Battle of the Bands' Textbooks and Tickets Tour presented by Chegg across the nation and will be finalizing their latest EP.

College Battle of the Bands

College Battle of the Bands, a national collegiate-music talent search, has awarded more than $250,000 in prizing over its first three years. The competition is open to any student band or music artist of any genre currently enrolled in an undergraduate program. The series began during the 2008-09 school year and has featured notable participants including The Local Natives and Mike Posner.

College Battle of the Bands
Harman