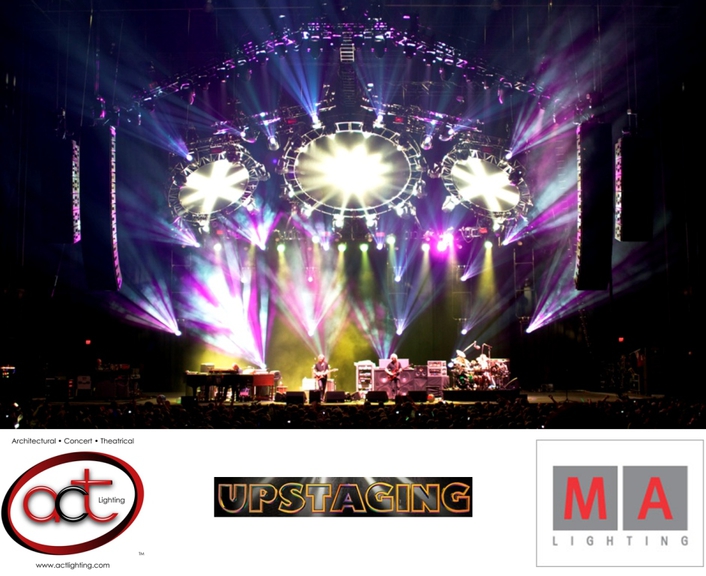 Giffin was convinced that the grandMA2’s flexibility would be perfect for lighting Phish
Longtime grandMA user Chris Kuroda, who’s marking his 22nd year as the lighting designer for the rock band Phish, has taken a pair of grandMA2 full-size consoles along on the musicians’ cross-country summer tour. Lighting programmer Andrew Giffin suggested using the grandMA2 for lighting control, and Kuroda reports that the two desks have been “a 100 percent complete and utter success. They’ve been incredibly wonderful – I’m very happy with them.”

Giffin was convinced that the grandMA2’s flexibility would be perfect for lighting Phish, a band known for musical improvisation, extended jams and performing a totally unique show each time it appears.

“Phish is a jam band. There’s no set list and you never know what song is coming next, so you have to pay attention,” Kuroda explains. “We need to program the lighting so we can grab anything very quickly. So I have the grandMA2 broken up into two worlds: one is a punter mode than runs on the fly and follows the music as it goes, and the other is a cue stack. Sometimes we’re changing cue times by hundredths of a second, and the grandMA2 gives me the flexibility to respond to these complicated requests better and easier than anything else.” 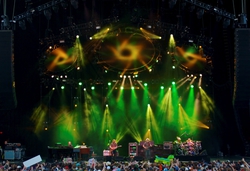 Kuroda runs the show from one grandMA2 console while Giffin makes adjustments and resets on his desk. “The way Chris runs Phish is very impressive, triggering things on the fly, dozens of cues all the time,” Giffin points out. “When other lighting designers have to improvise like that it’s more random, but Chris carefully thinks out every single move in terms of timing. With grandMA2, that kind of precision comes naturally. Its new preset-based effects engine allows me incredible control. Chris comes up with very specific effect ideas and I can build exactly what he's looking for right there on the fly.”

Kuroda applauds the grandMA2’s “great virtual playback” that enables him to put an array of tiles, or virtual touchscreen buttons, on the screen to choose from. “We use virtual playback to take the show to the next level,” he says. “It helps us to not have to change so many pages.”

Giffin says that the grandMA2’s “screens are massive, so we can fill them up with palettes and executer buttons and have all those cues on a line in a touchscreen and it all fits. We can also store timing info in the presets and recall them to create new variations of complex wipes and accents.” 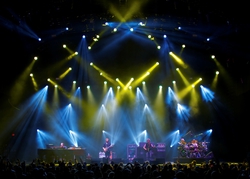 “We are also taking advantage of the new macro capabilities,” he reports, “which are simply unheard of in any other lighting desk. We have a macro called ‘Loop,’ for example, which stores a variable into memory that running sequences check to determine whether they should play once and stop, or restart again automatically.”

Kuroda likes the grandMA2’s power and enhanced capabilities. “It’s incredibly powerful and does things that other desks can’t. Andrew can customize the system in ways that he could never do before. That really distinguishes the grandMA2 from any other desk.”

He notes that he and Giffin were even able to previz the show using their consoles and grandMA 3D, a free, state-of-the-art visualization program, that “works better than other previz system I’ve used. We were blown away with how good the previz came out and how well it was matched to the desk. MA has really wonderful tools to construct, program and run your show.”

According to Giffin, the grandMA2 has been “rock-solid stable” during the Phish summer tour. “Considering the intensity of these shows, that’s really impressive.” For Kuroda, adjusting to the new grandMA2 “was a lot quicker than I anticipated,” he says. “I’d recommend the grandMA2 to anyone. We’re really in a happy place, and it’s only going to get better from here.”

Upstaging provided the grandMA2s for the tour. MA Lighting is exclusively distributed in North America by A.C.T Lighting.