This year it was GLP’s new impression X4 that was brought into focus at the Staples Center in Los Angeles, where acts including Green Day, Rihanna, Taylor Swift, Pink, Alicia Keys, Lil Wayne, Frank Ocean and One Direction all graced the futuristic stage, which was lit by a massive lighting rig containing over 5,000 light sources.

“The show itself has become a social network event and a focal point of fashion — and so it was a fabulous place to show off this stylish new light,” remarked Kenny. “It’s always a policy of mine to try out new technology and styles of lighting on the VMA’s and every year we have a stand alone product that catches the eye. This year I needed a sleek white fixture to complement Florian’s concept, and I knew the white finish of the X4s would fit the part perfectly.”

The 50 or so fixtures were supplied by Video Equipment Rentals (VER) of Glendale, CA and it was their lighting manager, Susan Tesh who first introduced the LD to the new washlights. VER have been Ton Kenny’s regular vendors for West Coast shows and he says he is fortunate that the company has a policy of investment in new products.

The X4 itself features 19 of the new Osram Quad Optic 15W RGBW LED’s (single LED’s each containing four colours), in a slimline body with no base unit. The impression X4 houses a 7° to 50° zoom range, to provide a good beam spread and matrix effects, full color mixing including CTC and customizable pixel patterns across its front face. On top of that it weighs just 17.5 lbs (7.75kg).

At the VMA’s, the X4’s were hidden in the set and positioned behind the main 'string art’ onstage — “as well as anywhere that we wanted some clever eye candy.”

Tom Kenny was able to make full use of the wide color palette, from soft pastels to deep saturates. “The X4s not only gave me the modern out of this world look but when [lighting programmer] Mike Appel zoomed them they gave an amazing beam that stunned us all. They delivered a great glow and beam to the area, and the reds and oranges, in particular, were stunning.” 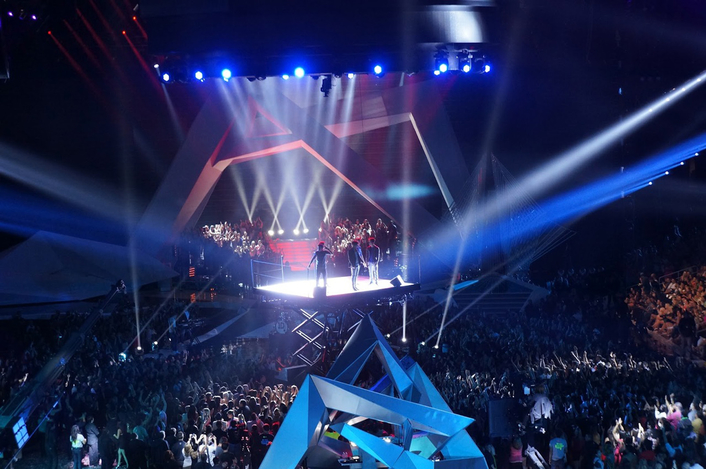 He said that having successfully test driven the impression X4’s he will now specify them on all future projects. “Every year I try out new products and every year there is one stand alone fixture that gets the artists talking. And this year two of the biggest pop stars in the world remarked on how gorgeous the X4’s looked!”