Some 140 GLP impression X4 series fixtures were out in force at this year’s Eurovision Song Contest (ESC 2015) which took place at the 16,000 capacity Wiener Stadthalle in Austria. Experienced TV lighting director (and Emmy Award winner) Al Gurdon, was undertaking his third ESC (the 60th edition overall) with the aid of the X4 family, including the new X4 Bar 20 battens.

Gurdon was supported in his product selection and inventory sourcing by long-term associate, PRG’s Richard Gorrod — while the latter’s counterpart at PRG Germany, Matthias Rau, was also responsible for providing much of the kit.

After working collaboratively for the last 15 years, Gurdon and Gorrod have developed a symbiotic relationship. “A lot doesn’t need to be said as I know how Al works and what he requires,” states Gorrod. For ESC it was essential that every act had a personalised set, as the PRG man explains. “The core rig needed to have many possibilities for creating different looks. We speak to the countries beforehand and confirm what they require.” 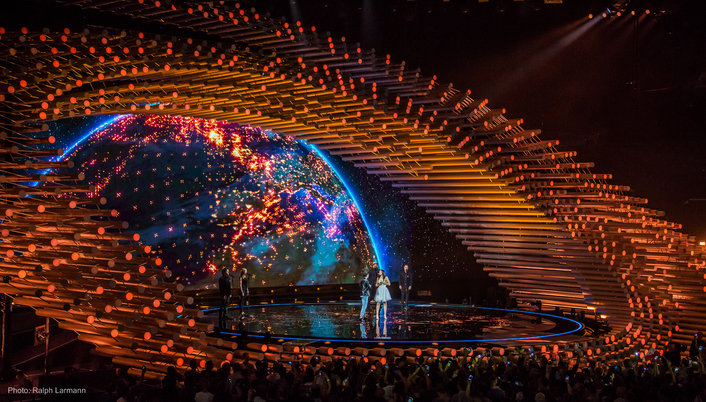 However, this year production was confronted by physical challenges, not least being the low ceiling height, with the result that the set was virtually touching the roof. Working within these parameters, the design was based around a huge 83-lamp wall — a portal forming a bridge between the artists, their delegations and the audience all over the world, which flew in and out. When in ‘Out’ mode, it revealed the orchestra, which was used for interval and opening acts. 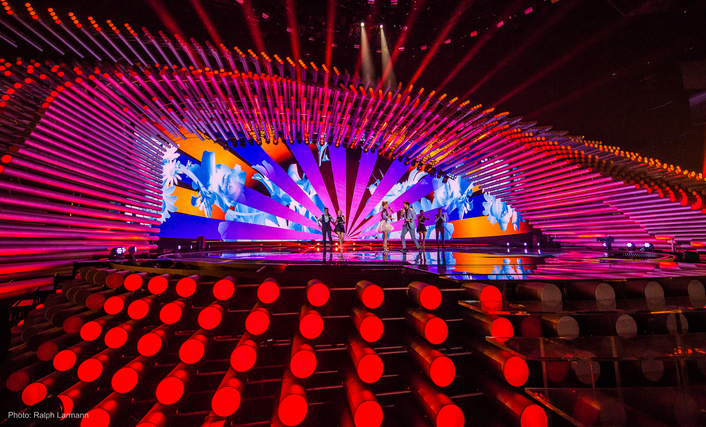 Largely LED based, the stage itself consisted of 1288 individual pipes, and measured 44 metres in width, 14.3 metres in height and up to 22 metres deep — with a second LED background wall measuring 22 metre wide and 5 metres high. It is here that the GLP fixtures came into their own. 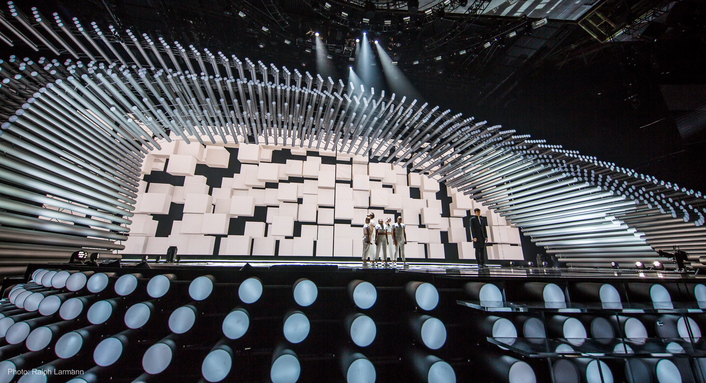 The more compact X4 S he says, was perfect for squeezing into pieces of set — and six of these tiny heads were deployed within the mobile lifting platform, with a further 12 on stage as side kickers due to their compact size.
As for the X4 Bar 20, the two men had originally been introduced to GLP’s stunning new multi-purpose sweepers, with motorised tilt and zoom, by GLP’s Mark Ravenhill. Richard Gorrod recalls that PRG had earlier provided a different proprietary cyc light effect for a Victoria Secrets show in in London. “But the GLP X4 Bar has a big advantage over it, in that you can zoom them and also place them back-to-back with no gaps.”

Consequently, for ESC Al Gurdon placed 25 of the X4 Bar 20 in a line at the back of the stage (in wide mode rather than pixel mapped) to form a horizon below the tracking video wall. “The colour and the great dimmer curve make them the perfect unit for this,” he states.

The fixtures were driven from the PRG V676 that provides some great programmed effects. “The impressions responded well,” he continued. “We used them in extended mode for the 16-bit colour control with a PRG S400 backbone for data distribution.” 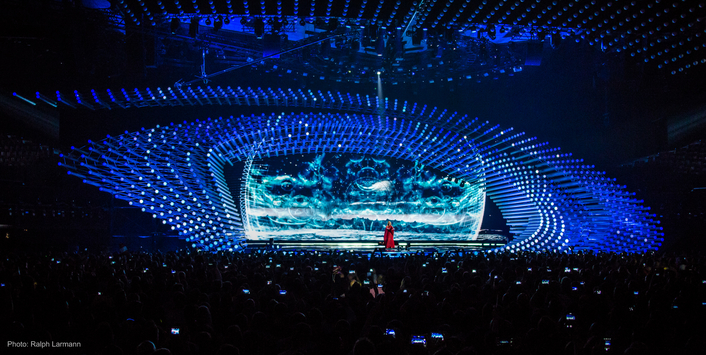 “It was also extremely useful that we could tilt the X4 Bar 20 [through 210° in 1.5 secs] as they can be used to point straight out as well as to light the pipes. They also added both movement and zoom and have great colour control.”
Production designer for the event was the multi-award winning Florian Wieder, who has worked closely with Al Gurdon over the years, while host broadcaster was ORF. Mike Oz Owen was chief lighting programmer and Michael Kranabeter from ORF handled key light and Green Room areas, while show director was Kurt Pongratz. Also in Al Gurdon’s team were Ian Reith, running media, Nev Bull as Media Farmer and Chris Henry calling the 17 follow spots. 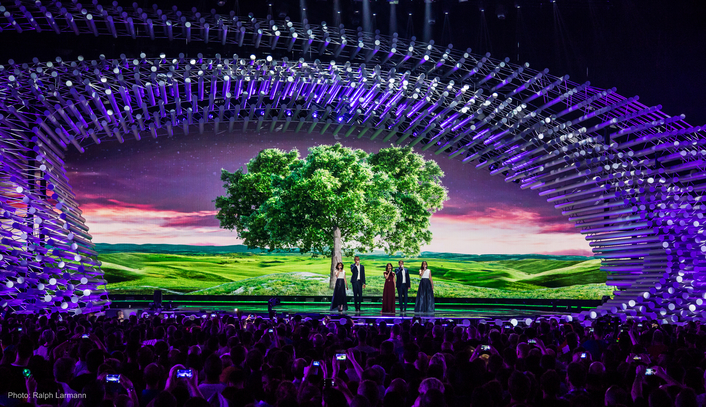 This year’s contest was won by Mans Zelmerlow from Sweden — the country that will now host the event next year. “But the final word comes from Al Gurdon himself. Asked what the impression family brought to his set this year he simply replied, “They are ultra-reliable and were a real workhorse in the Eurovision rig.”