Beatrice Egli Is German Idol 2013: Rehearsals for the German Idol finale at MMC studio 30/31
Up to 6.53 million viewers watched the finale of 'Deutschland sucht den Superstar' (German Idol) broadcast live on RTL from MMC’s studio 30/31. On Saturday, May 18th, Beatrice Egli (age 24) was voted as the winner of the 10th season of German Idol. The hit singer from Switzerland won with 70.25 percent of all audience votes against her competitor Lisa Wohlgemut (age 21) from Neundorf.

Egli won a record contract with Universal Music and 500 000 Euros guaranteed. Her first single 'Mein Herz' (My Heart) is available as download and quickly climbed to first place on the iTunes charts on the night of the finale.

Beatrice Egli is only the second woman, after Elli Erl in 2004, ever to win German Idol, which makes the 10th season very special. The jury included Dieter Bohlen, Bill and Tom Kaulitz (from Tokyo Hotel), and Mateo (from Culcha Candela).

At its peak, the grand finale of German Idol was watched by up to 6.53 million viewers. It achieved very good 22.2 percent of 14- to 59-year-olds (3.47 million). An average of 4.63 million viewers, aged 3 years plus (market share of 16.3%), watched the thrilling finale, in which the finalists had to perform three songs each.

The Production
On behalf of Grundy Light Entertainment, the theme shows, the semi-final, and the finale of German Idol were broadcast live from MMC studio 30/31 in the Coloneum. In addition, MMC studio 33 was also used in the live broadcast and arranged as lounge area for the competitors. 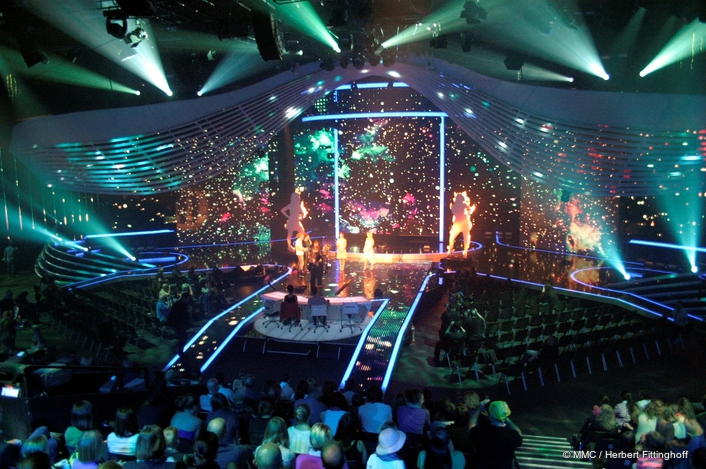 Rehearsals for the German Idol finale at MMC studio 30/31

In addition, a Sony P1 camera on a Blackcam dolly with a Canon ENG 14x4.3 lens was used for the production along with a Spidercam, equipped with a Panasonic AK-HC 1500 HD-camera.

The video signals were mixed on a GVG Kayenne XL (3.5 M/E) at MMC’s HD control room 11 and transmitted to RTL’s play-out center in Cologne-Deutz via two separate fiber optic routes.

The playbacks were carried out via four channels on a GVG Summit Server. For the highlight editing and the slo-mo playbacks, two six-channel EVS XT2 were used. For the recording, eight Sony XDCAM VTRs were available.

The Post-Production
The editing for the re-broadcast was done at MMC’s Editing Suite no. 5 using Avid Media Composer 6.0.3, on a Z800 computer with Nitris DX. The PGM image was captured directly and the completed timeline was played out via a Sony PDW1600 XDCAM.

The German Idol Stage, Lighting, and Media Technology
MMC’s Art Department built the complex stage in MMC studio 30/31, based on a design by Wieder Design.

In the past years, only minor adjustments had been made to the stage set. This year, viewers were impressed by the jubilee’s season complex re-design.

The two side towers, which had served the candidates as accommodation during the show, were eliminated. The previous "LED sky", made of MiStrip pixel strips in the ceiling, was thinned out.

In place of the side towers, a long curved, horizontal decorative element hemmed the stage. The special steel construction was equipped with C-series LED strips by Schnick Schnack Systems and was completely covered with white gauze. Through its filigree and semitransparent shape, the construction could also be photographed from behind, which made impressive reverse-shots during the vocal performances possible.

For this new stage element, which hung across the studio like a big room divider, the lighting design had to be rearranged. Many spotlights that had been positioned in the rearmost part of the old set were no longer visible. New positions had to be found; e.g. at the new stage element itself. Thus, a cloud of moving Sharpies by Clay Paky flanked the central element of the new stage.

Thanks to early conversations between lighting designer, Manuel da Costa, and the MMC Art Department, the steel construction was dimensioned in such a way that it was prepared for an additional load such as spotlights.

Sound Systems, Microphone Technology, and Broadcasting Sound
For the jubilee season’s FOH and microphone technology, a mix of proven technology and innovation was chosen. The sound of convincingly high quality was achieved via the well-known decentralized Meyer Sound systems, and 24 line array elements from AD-Systems, which have become established in the MMC studios in the past two years.

Rehearsals for the German Idol finale at MMC studio 30/31

Twenty-eight wireless Sennheiser microphones and a brand-new Sennheiser Digital 9000 system provided the microphone solutions for presenters, candidates, and jury in the studio, and for people in the candidate lounge and the voting room.

MMC is the first German studio operator to possess large numbers of these reliable, fully digital, and wireless systems. These systems are “future-proof” due to their large switching bandwidth. They are prepared for changing conditions, such as changes in the frequency ranges used by the next generation of mobile networks (known as LTE networks).

The finale’s live atmosphere at MMC studio 30/31 was captured via 16 ambience microphones by Neumann and Sennheiser. The candidates’ audio monitoring was realized via 14 stereo Sennheiser 2050 in-ear systems with cast headphones by UltimateEars.

MMC’s Head of Sound, Constantin Gabrysch, mixed the broadcasting sound of German Idol’s live shows on a Lawo mc2 82 mixing console. The 92 inputs to the console were temporarily used to full capacity. For sound effects, a TC M6000 effect processor with 4 engines and one Eventide Orville with 2 engines were used.

The playbacks of the jingles, sound effects, music and click tracks for the in-ear monitoring were transmitted via Madi, through 8 channels of a Teatro feed system, which was also coupled with the lighting and media control desk and the video mixer via Midi and GPI. In addition, 2 channels of the K2 Summit Server and 2 EVS for further audio playbacks were used.

The German Idol's Finale ...from the MMC Studio 30/31
A grand final: grandMA2 w...hit at Swedish “Idol”
Robe Gets The Idol Treatment Again in SA
MMC Studio 30/31